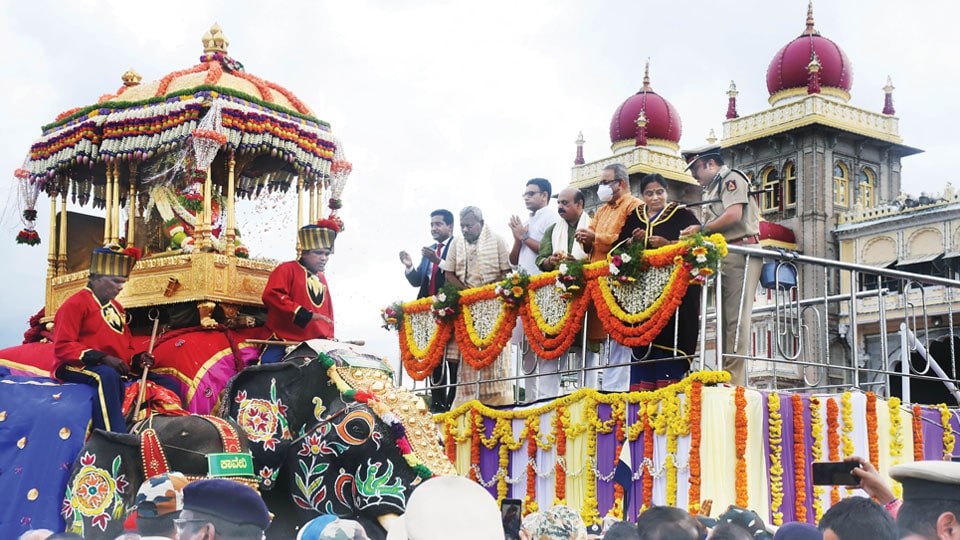 Mysore/Mysuru: Navarathri in Mysuru concluded last evening with a spectacular ‘Jumboo Savari’ within the confines of the Mysore Palace. This year too, the celebrations were muted under the shadow of COVID-19.

But inside the Palace, more than 8,000 people were allowed to witness the procession even as the Government had restricted the entry to 500 people. Only the common man was stopped at the gates while politicians, Police and officials, their friends, relatives and followers were allowed free entry and the venue looked like a celebration in a normal year throwing all COVID norms out of the window.

The procession of Howdah Elephant Abhimanyu, who was carrying the 750-kg Golden Howdah with the decked up idol of Goddess Chamundeshwari placed inside, went on smoothly and he carried the Ambari with grace and majesty.

It was Tusker Abhimanyu’s second Dasara as the Howdah elephant and he was in company of caparisoned Kumki elephants Chaitra to his left and Cauvery to his right. The decorated shining Golden Howdah and caparisoned elephants were a treat to watch.

The Nada Habba festivities were inaugurated by former CM S.M. Krishna atop the Chamundi Hill on Oct. 5 and it concluded with the Vijayadashami procession last evening.

Before the procession began, to mark respect to Goddess Chamundeshwari, 21-round cannons were fired by the City Armed Reserve personnel and the National Anthem was played as Abhimanyu lifted its trunk to salute. The procession then began and as Abhimanyu passed in front of Someshwara Temple, the mesmerised crowd chanted ‘Jai Chamundi’.

Unlike the usual five-km procession route from the Palace up to Bannimantap, this year’s procession was limited to 600 metres within the Palace premises. The event was live-streamed on various platforms to keep the people indoors. The entire event was completed in one hour.

The elephant team consisted of six elephants — Howdah elephant Abhimanyu, Nishane elephant Dhananjaya, Naupat elephant Gopalaswamy, Saalane Ashwathama (debutant) and Kumkis Cauvery and Chaitra. Vikrama was not allowed to participate as he was in musth condition and elephant Lakshmi too was withdrawn as she was panicking while seeing the crowd.

In 1994, the then Government led by M. Veerappa Moily decided not to allow the procession beyond the Palace due to plague in Gujarat as his Government was taking precautions to prevent an outbreak in Karnataka. In 2002, the then CM S.M. Krishna restricted the procession to the Palace in the wake of severe drought and due to the kidnap of former Minister H. Nagappa by forest brigand Veerappan.