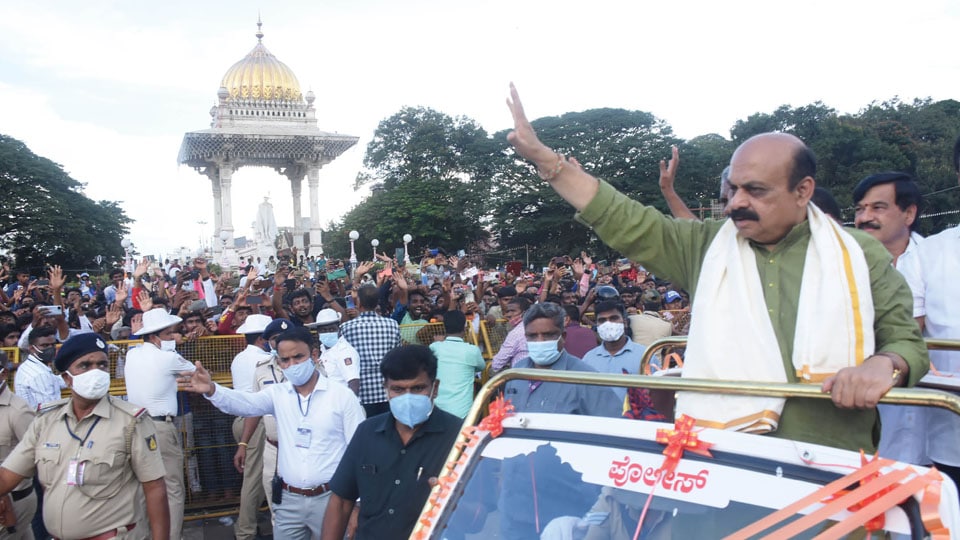 Mysore/Mysuru: As if to grant the wishes of Chief Minister Basavaraj Bommai who prayed for good rains while showering flower petals to the idol of Goddess Chamundeshwari, it rained heavily last evening soon after the procession.

It rained for nearly two hours and the city witnessed water-logged streets. The city witnessed massive traffic jams due to inundated streets making it difficult for commuters to travel. Although dark clouds hovered over the city before the ‘Jumboo Savari’ began, it did not rain. But it started pouring at 6.30 pm catching the people off guard. Thousands of them who converged inside the Palace to see the festivities and also at the city centre to see the night illumination ran for cover and took shelter in shops and bus shelters parking their vehicles on the road. Several low-lying areas were flooded and many places — where the roads and sides were dug up for repairs of pipes and drains — resembled slush pools. As there were traffic diversions and one-ways around the Palace, people had come to the Central Business District after parking their vehicles beyond the crowded places.

They had to wait for the rains to subside to reach their vehicles and women and children were put to a lot of inconvenience. Even people who went around the illuminated city on the Ambaari hop-on and hop-off double-decker buses were completely drenched.

The India Meteorological Department has predicted more rain in the next 24 to 48 hours.