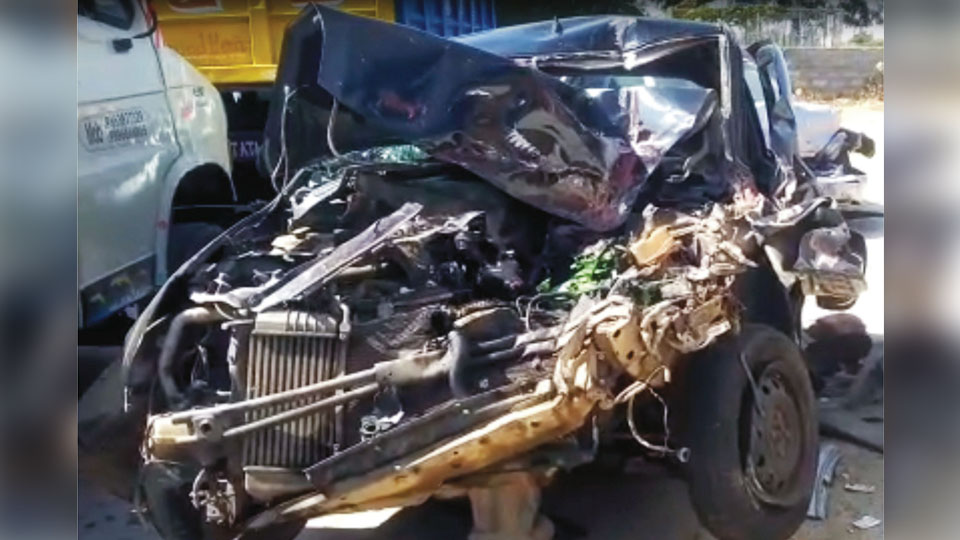 An 11-year-old boy and a 37-year-old man were killed on the spot when the car in which they were travelling towards Bengaluru rammed against a KSRTC bus in Srirangapatna town this morning. While two persons, who were also travelling in the car, sustained grievous injuries, one person escaped with minor injuries.

The incident occurred at around 7.45 am and the victims have been identified as Lingesh (37), son of Sarboji, a resident of Venkatasomappa Layout, Chamundi Nagar, Bengaluru and Kiran (11), son of Jayarajan, a resident of Kaval Byrasandra near R.T. Nagar, Bengaluru. While Karthikeyan escaped with minor injuries, Rahul and Arjun have been admitted to K.R. Hospital with grievous injuries.

According to the Police, all the five persons had come to Srirangapatna early this morning in a Maruti Swift car (KA-22-N-7405) to immerse the ashes of one of their relatives at Pashchima Vahini.

After the rituals and breakfast, they headed towards Bengaluru and Lingesh was driving the car. While Kiran was sitting on the front seat, Karthikeyan, Rahul and Arjun were sitting on the back seat.

The Police said that as the car was speeding near the Arch Gate in Srirangapatna town, Lingesh could not see a KSRTC bus taking a right turn on the main road and rammed his car against the bus.  Both Lingesh and Kiran died on the spot. Town Police have registered a case and have shifted the bodies to Srirangapatna Government Hospital Mortuary.

The Police have detained the KSRTC driver Ramappa B. Jinagi. According to Mysuru City KSRTC Deputy Commissioner K. Ramamurthy, the Intelligent Transport System (ITS) had recorded the speed of the bus to be at 18 km per hour. Eyewitnesses said that the car was over-speeding.