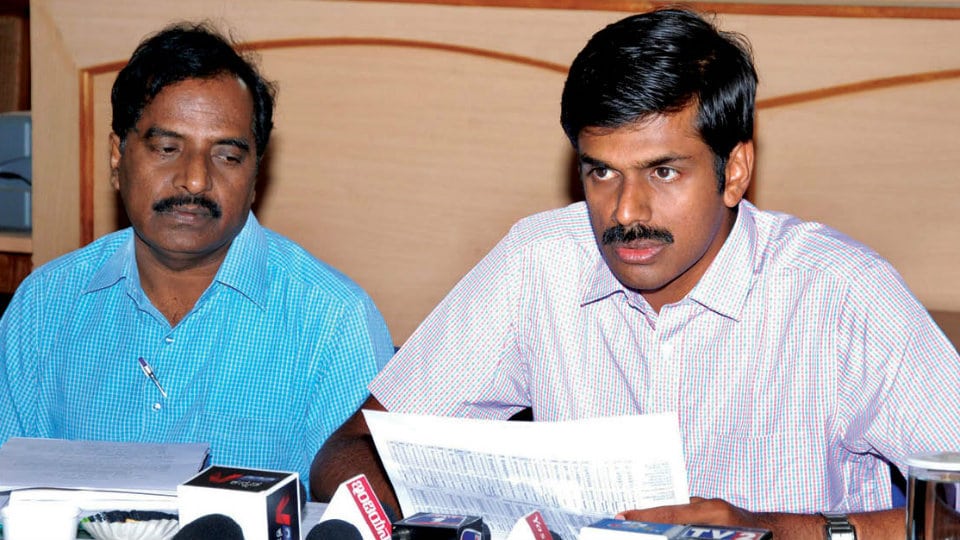 Mysuru: There are a total of 24,65,102 voters in the district comprising 11 Assembly segments and out of this, 12,34,454 are men and 12,30,648 are women, said Mysuru Deputy Commissioner Abhiram G. Sankar, who is also the District Election Officer, addressing a press meet at his office yesterday. He said the enrolment of women voters had increased. There are 11 Assembly segments in Mysuru district and they are Chamaraja, Krishnaraja, Narasimharaja, Chamundeshwari, Varuna, T. Narasipur, Nanjangud, H.D. Kote, K.R. Nagar, Periyapatna and Hunsur.

42,510 names deleted : “We have deleted 42,510 names from the voters’ list from October 2018 to January 16. The District Administration received 42,821 applications (Form 7) seeking deletion of names in the electoral roll. Out of them, 42,510 were approved and 292 were rejected for various reasons. While 15,336 names of dead persons were removed, 22,688 voters have shifted to other places and 4,480 duplicate names are being removed from the list,” he said.

He said that the highest number of deletion of names had been done in Krishnaraja, Chamaraja and Narasimharaja Constituencies in Mysuru city.

Appeal to voters: The DC has appealed to the voters (both old and new) to check their names in the new voters list by logging on to www.ceokarnataka.kar.nic.in and added that there are provisions to include the names which have been left out. He warned the voters against enrolling their names in more than one Constituency as it was a crime.

The DC said 73.7 per cent of the population in the district comprised the electorate. “This ratio is higher than the State average which is around 71.7 per cent. The voter percentage ratio in the district had been arrived at based on the population of the district until January 2019, which is around 33,44,971. The highest number of voters was in Chamundeshwari Constituency – 2,95,990  and the least number of voters in Periyapatna – 1,81,160.

Voter Helpline: The DC said that those in need of information pertaining to voters list can call District Contact Centre on toll-free number 1950 between 9 am and 9 pm and get information.