As the city soaks in joy, celebrating Christmas and looking forward to welcome New Year, District Administration has organised various events as part of Mysuru Winter Festival. Now, as an add-on to this winter chill, city-based Niranthara Foundation has organised a five-day theatre fest ‘Niranthara Ranga Utsava-2017’ at Vanaranga, the open stage in Rangayana premises here from Dec.26 to 30 where one can literally feel the cool weather and witness plays that provide food-for-thought. 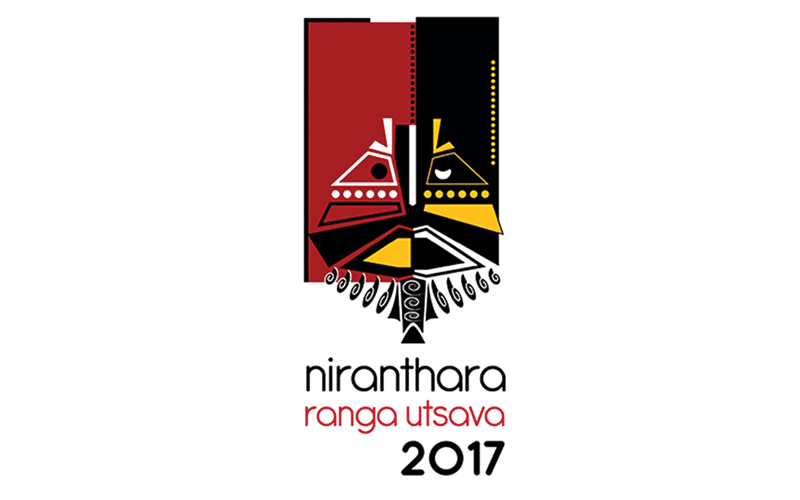 The Theatre Fest, which features plays at 7 pm every day, will be inaugurated on Dec.26 at 6.15 pm in the presence of Kannada & Culture Director N.R. Vishukumar, Rangayana Director Bagirathi Bai Kadam, Journalist Ravi Koti and Prasad Kundoor of Niranthara. Prior to the inauguration, B.K. Narasimharaju and troupe from Bevinahalli in Sira Taluk, will present Arevadhya and Somana Kunita at 6 pm.

Valedictory will be held at 6.15 pm on Dec.30 in the presence of writer Nataraj Huliyar, Income Tax Commissioner (Chennai) Jayaram Raypura, Rangayana Joint Director Mallikarjunaswamy and M.M. Suguna of Niranthara. The Swapnavasavadatta endeavour of Rangayana Dharwad is an attempt to relate the famous historic work of ancient Indian poet Bhasa Mahakavi, to modern timeline. Belonging to a Desi genre, the direction involves experimenting with new techniques. The plot is an analysis of humans, dreams and psychology.

The play progresses trying to differentiate dreams from reality in a subtle way. This quest takes the audience through a journey in an imaginary world. Every character in the play is stuck in its own dreamland. 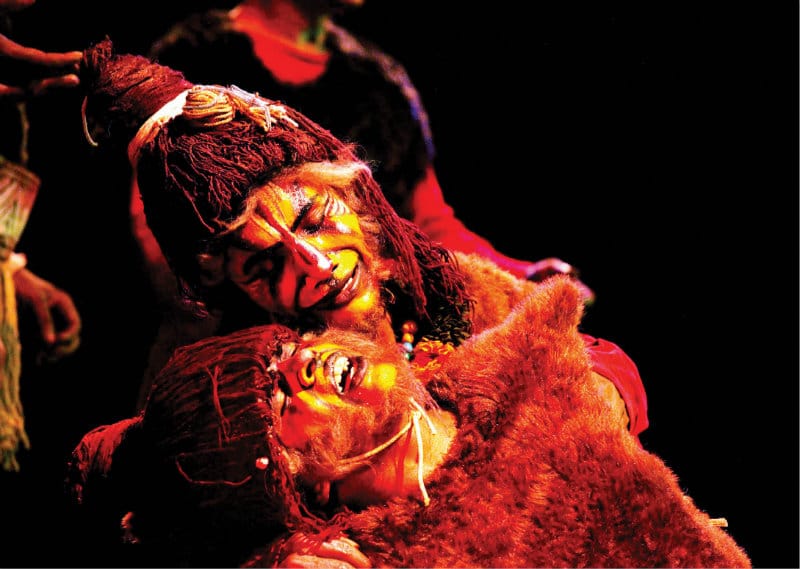 Vaali Vadhe play is based on two parts of Kuvempu’s Sri Ramayana Darshanam — ‘Pundena Agni Saakshi’ and ‘Neem Sathyavrathaneditam.’  The purpose of the play is to give today’s generation an insight into relationships and a taste of rich Kannada literature. The evil Vaali of Valmiki’s Ramayana, here turns out to be the one who longs for love and regrets his behaviour just before dying and wishes for a loving balanced relationship. This play includes elements of Yakshgana, Kalaripayattu and a Manipuri art form. This is a musically oriented play. While a thinker inside a sentimentalist and a sentimentalist inside a thinker are suffering an ancient story of India becomes a play to show depth of love. 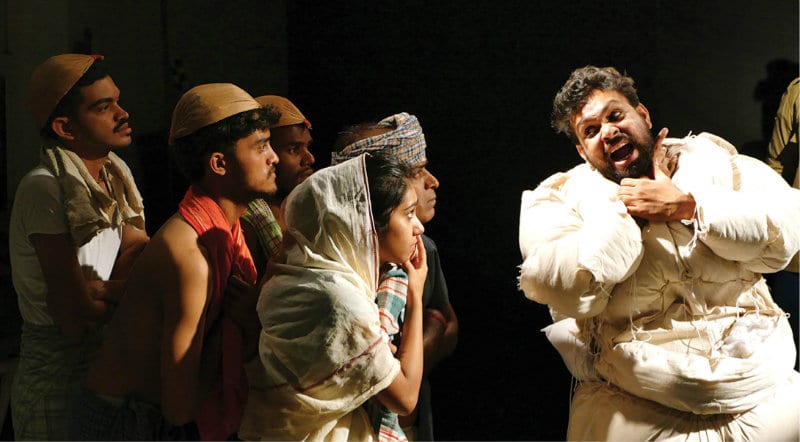 Ubu Roi is a hunger minded soldier who admires his own waste. He, along with his wife with equally vulgar mind, dictatorial power by hatching political conspiracies. He creates a mutual disbelief among the subjects and creates places that are similar to concentration camps to get rid of his critics. He gets machines invented to kill the ones that were politically opposed to him.

He makes the lives of common people a hell by introducing some laughable taxes with an intention to load his treasury. He creates a fearful environment by hanging judges, artists and journalists. Even though he eventually gets thrown out in a cough continuous to search for a new place for his. 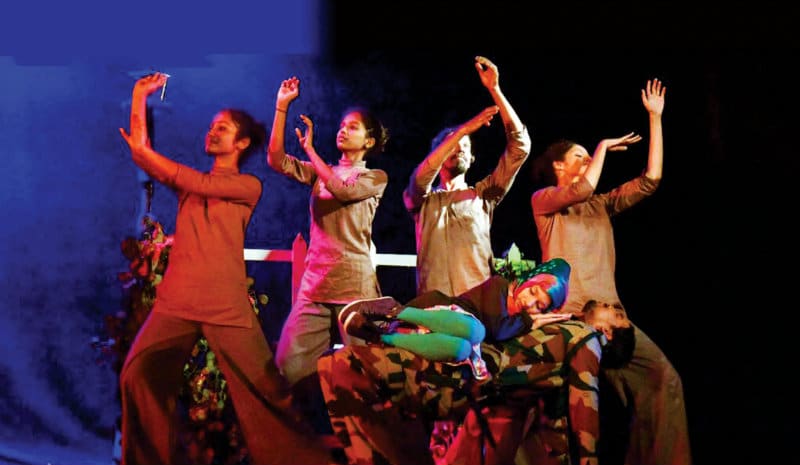 We Teach Life…Sir!’ is an experimental script based on effects of war. The stories of Palestine’s war and other poems have been used in making of this script. This script not only deals with after effects of war but also addresses the pressures behind the inevitabilities of war. 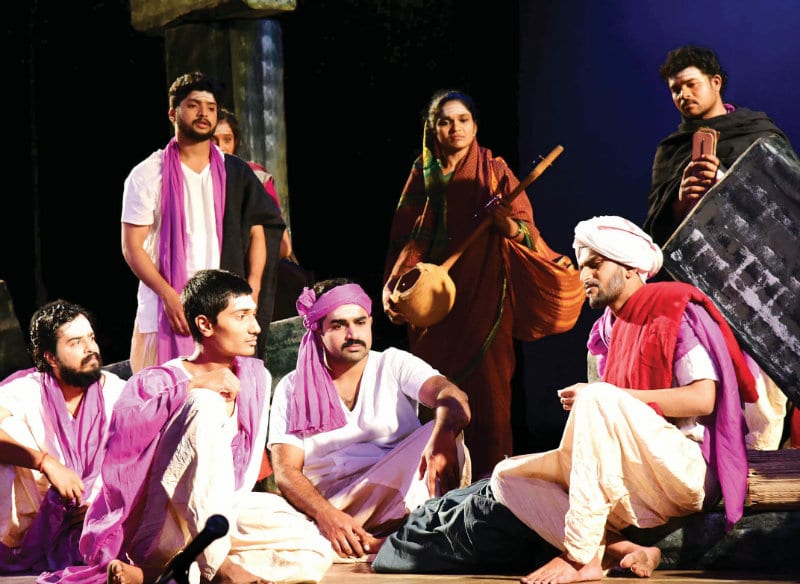 The tendency of the society to go behind the liberals is not new. But the self confidence of saying ‘I will act according to my will’ has been marshalled against such thoughts. Karnataka’s luck, Vachana Literature has survived the attack of bijjila’s army to reach millions of people. Reinventing itself in different places spreading all over the world has proved that creativity has no end. Poets, folklore and artists have made sure that the spark of the Movement — Free expression of one’s thinking — is unharmed. These remarkable steps have been rediscovered in Mundana Kathana. The play expresses the fear among the art tribe of India about the growing intolerance towards free speech and expression.

Niranthara Foundation has been working in the field of theatre for the last two decades with a clear social commitment. It has an ever-growing bunch of young minds who have been continuously offering creative and socially useful programmes across Karnataka. Niranthara aims at contributing to building a society based on social values, responsibility and equality. Niranthara was an idea conceived when a group of a few youngsters thought of building a solid team of committed activists, engaged in theatre activities addressing social issues. It was formally established on Sept.28, 1997. Niranthara Ranga Utsava is an annual event of the Foundation which it claims as a tiny contribution to Kannada theatre, with the vision to tear apart neo cultural barriers, says the Foundation.