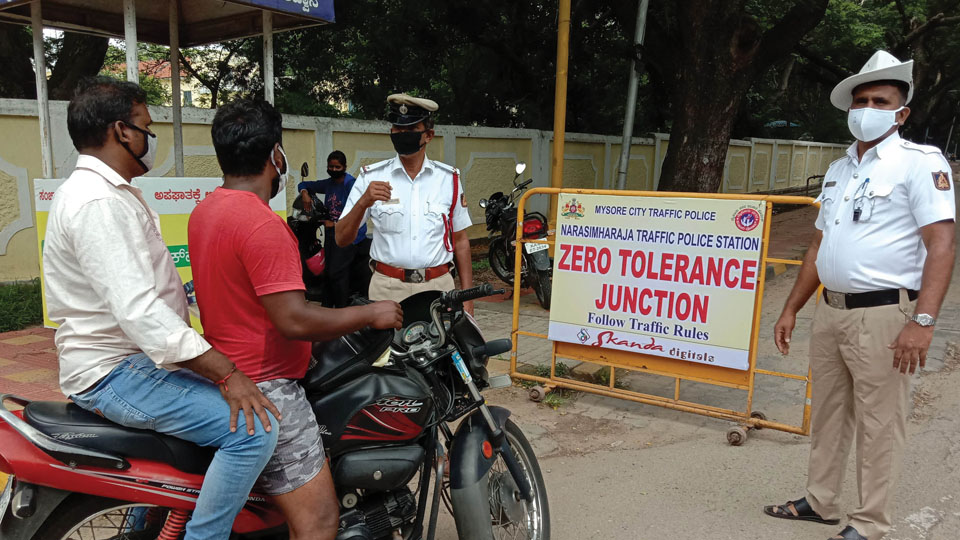 Checking of vehicles was suspended for some days due to COVID

Mysore/Mysuru: Though Mysuru district was under lockdown for several days during 2020 and early 2021, the number of road accidents had not decreased. During the above period, as many as 893 people were killed and 3,781 people had sustained injuries in road accidents in city and across the district.

The Police, in a bid to prevent the spread of Coronavirus, had suspended vehicle checking drives including drunk and drive in the district, which was taken as an advantage by motorists. Apart from flouting traffic rules, which had led to several road accidents, bad roads too had claimed many lives.

Among 633 road accident cases in city in 2020, as many as 118 people were killed and 515 people have sustained injuries in city.

From Jan. 1, 2021 till date, 520 accidents have occurred in city out of which 100 persons lost their lives and 420 people have sustained injuries.

Suspension of vehicle checking drive: Following the outbreak of COVID pandemic, the Police had temporarily suspended helmet, documents and drunk and drive checking.

During this period, when road accidents took place, the persons involved in the accident were not subjected to breath analyser test for alcohol using an alcometer, but were subjected to medical examination and only after the reports confirmed for the presence of alcohol, fines were imposed.

The number of deaths in road accidents had increased after helmet and drunk and drive checking were suspended, a Police officer said.

Bad roads: Bad roads too have taken toll of many lives in the district especially in rural places. Huge potholes, unscientific road humps, lack of streetlights and rains are also causes for a number of deaths.

If the authorities concerned do not take up road repair works soon, there are chances of more people losing their lives,  public have opined.

Meeting on prevention of accidents held: Additional Superintendent of Police (ASP) R. Shivakumar, speaking to SOM, said that a meeting with officials of National Highway Authority of India (NHAI), Public Works Department (PWD) and Regional Transport Office (RTO) officials was held after the COVID-positive cases reduced and discussions on prevention of road accidents was held.

He said that information on clearing of roadside trees, construction of scientific road humps were given during the meeting.

City Police Commissioner Dr. Chandragupta too said that the drunk and drive checking, which was temporarily suspended during COVID pandemic time, has commenced in city limits too.