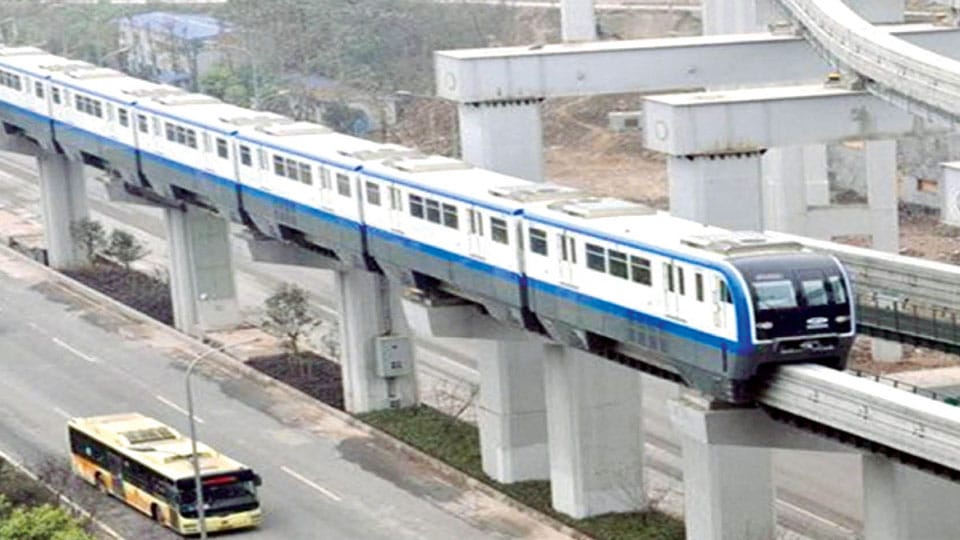 A study conducted by a group of civil engineering students of the National Institute of Engineering (NIE), Mysuru, recommends development of a multimodal transport network for Mysuru urban area that is compatible with the Comprehensive Development Plan (CDP) 2031. The project involves planning of multiple bus stands at corridors, Bus Rapid Transit System (BRTS) along arterial roads and ring rail along th eOuter Ring Road.

The study was taken up in 2017 when metro work was in full swing in Bengaluru. The NIE team wanted to explore future requirements of such a metro project for Mysuru as well. Thanks to Chairman H.V. Rajeev, Mysuru Urban Development Authority (MUDA) has taken proactive measures in getting a Metro Neo Corridor project to Mysuru. However, the NIE team has a different proposition — BRTS-based multimodal network.

Dr. K. C. Manjunath, Head of Civil Engineering Department and project guide at NIE, says that the proposed multimodal network is quite cost effective and it provides an efficient public transportation system. Based on the data provided by MUDA and KSRTC, CDP (Master Plan) and survey information, the project was carried out under the title “Planning of Public Transport for Mysuru City Master Plan-2031” by four students — B.S. Samatha, M. Nikhilash, K. Poojitha and Manikantha Reddy S. Benal.

Mysuru city has a radial and grid-iron pattern road network with arterial roads originating from the city centre. However, increase in both population and motor vehicles has resulted in congested roads and delay in transportation. Public transportation is largely by bus and it serves only 17 percent of the Local Planning Area (LPA) population as per 2016 data.

Due to lack of interconnectivity between the planning districts, the existing public transportation is inadequate for present and future population. It is projected by trend method that by 2031, Mysuru’s urban population will be 20 lakh.

The city is well connected by road, rail and airport. Mysuru is connected by National Highway (NH-766) to the State border town of Gundlupet, where the road forks into the States of Kerala and Tamil Nadu, and National Highway-275, which connects Mysuru to Bengaluru. The city has 5 main arterial roads, which are also the Highways connecting Bengaluru, Madikeri and Hassan, Ooty, T. Narasipur and H.D. Kote and Manandavadi (SH-33).

The total number of intersections is 210 out of which 30 have traffic signal lights, 22 have blinkers and 158 are controlled manually by Policemen (2017 data). Various modes of vehicles have grown in the past four decades from 4 times to 25 times with the highest growth seen in two-wheelers and cars.

The current mass transportation in Mysuru is mainly through bus and is supplemented by private transport of four-wheelers and three-wheelers.

Bus Rapid Transit System (BRTS) is a bus-based public transport system with dedicated median lanes to buses. It combines capacity and speed of a metro with the flexibility, lower cost and simplicity of a bus system. The system fully utilises existing roadways, right-of-way, and station sites.

As far as Mysuru is concerned, BRTS is proposed for arterial roads. The capital costs of the project include busway infrastructure, stations, buses and technology systems. The cost is about Rs. 15 crore per km considering Ahmedabad’s BRTS project.

Though BRTS is planned for arterial roads, microbuses of 20 to 25-passenger capacity are recommended for connecting the planning districts within the arterial roads. These buses can be step-entrance vehicles or low floor buses.

Based on the preliminary investigation of various urban rail transit systems and by considering factors such as aesthetic view, low cost of construction and flexibility, the study suggested to consider Straddle Beam Type Monorail (ring rail) for Outer Ring Road of Mysuru.

The ring rail is a circular rail network that runs parallel to the Ring Road and acts as a feeder network for multiple bus stands at corridors. Since the length of the Outer Ring Road in Mysuru is about 42.5 km with average width of 45 mts, ring rail is planned.

The study involved collecting primary data on classified traffic volume counts on major roads, O–D (origin–destination) survey reports and road inventory details. Secondary data was studied from the transport model from the Comprehensive Mobility Plan (CMP) report related to the trip generation and zones and destination zones. Further, the existing and proposed land use and activity pattern was studied from the City Development Plan and Master Plan.

The resultant outputs were aligned towards identifying demand corridors for mass transport system, engineering and land use feasibility. The study data is used to plan multiple bus stands at junctions of Outer Ring Road and arterial roads so that traffic decongestion is possible in the Central Business District.

Since MUDA has plans for Metro Neo Corridor, experts should compare cost per km of the proposed metro with multimodal public transport as recommended by NIE. We need to thoroughly examine whether there is sufficient road width, especially on the Ring Roads, to build bi-directional monorail and BRTS networks. Perhaps, NIE can initiate debate and consultation with urban transport experts.

[Prof. G.L. Shekar is Advisor-Technical Education. This project was initiated when he was NIE Principal]