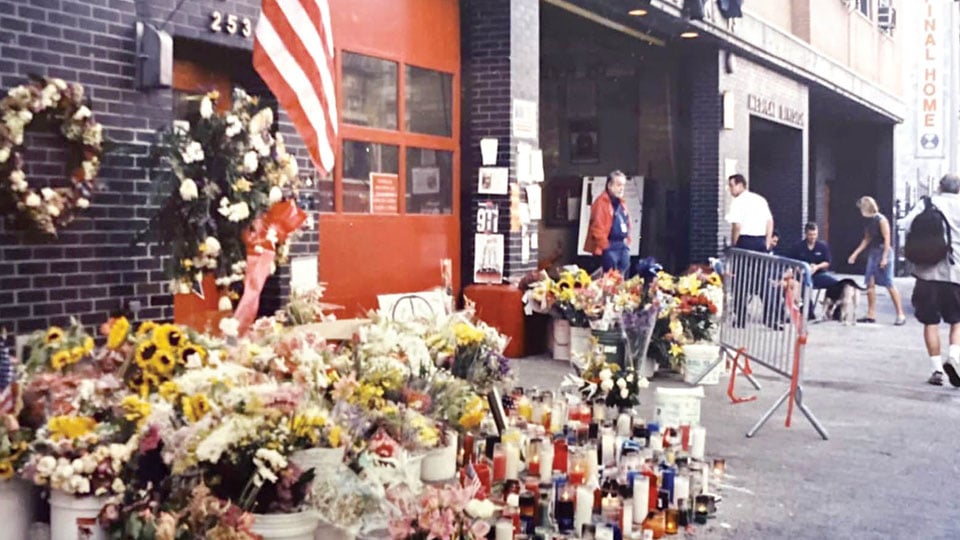 ‘We did special prayers and chanting to get over trauma’

Mysuru-based Ashtanga yoga teacher Sharath Jois was in New York to teach yoga when the two planes struck the World Trade Center. Here he recalls what he saw and how yoga helped his students heal from immediate trauma. —Ed

September 11, 2001. Like for millions across the world, it is an unforgettable day for me too. It is a day I remember with tremendous sorrow.

I was in New York (NY) with my grandfather K. Pattabhi Jois to teach hundreds of New Yorkers who had signed up enthusiastically for our Ashtanga yoga workshop. The month-long workshop commenced on Sept. 1 and was conducted at the historic Puck Building in Manhattan, New York City.

My grandfather and I were put up in an apartment building on Spring Street, six or seven blocks away from the World Trade Centre (WTC).

The apartment had a covered space on the roof where I practised yoga in the wee hours of the morning. From here I could see the beautiful twin towers of the WTC during my daily sadhana. They were two breath-taking buildings, they symbolised the captivating energy of NY.

On September 11, we had a workshop from 6 to 8 am.  I had practised as usual in the morning on the rooftop, taking in the view of the beautiful buildings and later, went with my grandfather to teach. After the class got over at 8 am, we returned in the car to our apartment building.

As we were getting out of the car, we heard a resounding boom at a distance. It was so loud everything around us seemed to be shaking. The initial reaction was one of  bewilderment. As I looked up, I saw the tail of an aeroplane disappearing into the south tower of the twin towers. “Could this be an accident?” We wondered. By then, dust and fire from the building were billowing, clouding the sky. I went to the apartment rooftop to get a better look at what was happening. Just as I was looking, wondering how a plane ended up in a building, I saw another aeroplane being flown into the north tower. A ball of fire went up in the air. I felt shock and numb, the kind one experiences when they witness something unfathomable.

Soon the area around the apartment swelled with devastated New Yorkers crying and walking Uptown. After a while, I went down to understand what was happening when one tower fell, followed by the other. Both towers, the pride of America, had diminished to rubble in front of our eyes. It  was surreal.

As the news of the devastating attack on America spread, we were flooded with calls — from students in other parts of the US checking on us. Our family back in India worried for our safety and asked us to return immediately.

We, however, decided to stay. We felt that maybe our students will need us, they will be going through a traumatic time now and at such a time, we could be there for emotional support and the practice of yoga, if not alleviate their pain, at least be a balm.

The very next day, the roads to the yoga workshop centre were blocked and we had to cancel the class. But the day after, we resumed the classes and to our surprise many students turned up. They were distraught and terrified but still came for the class.

The following days were emotionally charged. Students were crying and holding each other for comfort. We did additional chanting sessions and prayers in the hope that they would feel better. We noticed in the later days that there was a remarkable change in students’ behaviour. They were more respectful and caring for each other. Many memorials were being held at various places in NY for the departed. We went to places like the Union Square to pay homage to those who lost their lives in the terror strike.

Fortunately, none of our students were directly affected. One of them had gone to the WTC on that day after the class to meet a friend but she ran out of the tower to safety when she heard the blast.

Later, students told us that they had felt grateful that we stayed with them and continued the classes.

Yoga, meditation and special chanting were conducted to lift their spirit, with a hope to bring in some  sense of normalcy in their lives. Like we turn to families for support during difficult times, we were glad to be there for our family of yoga practitioners.

We practised yoga for the rest of September and we returned to Mysuru at the end of the month.

As I sat in Mysuru thinking of those post 9/11 days and the yoga workshop, I hope it left our students in better shape mentally, I hope yoga helped them heal and deal with the trauma they had gone through. I hope as a teacher I have fulfilled my duty of not only being there but also guiding them through their yoga sessions and alleviating their pain, even if it was just a little bit.