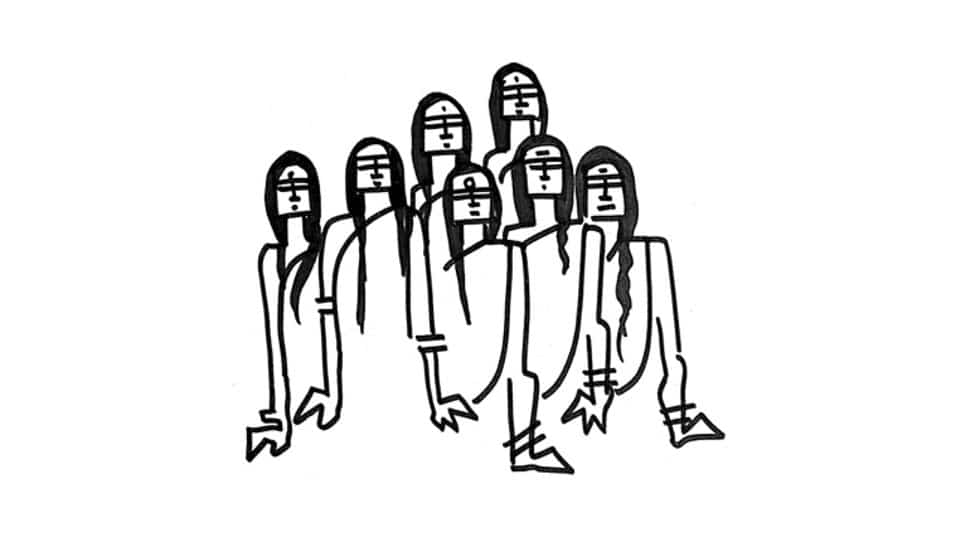 A cluster of Goddesses

In the Vedas, one does find references to individual Goddesses like Usha, Vak and Aranyani who represent dawn, speech, and forests, respectively. In the Puranas, there is Lakshmi, Durga and Saraswati, embodiments of wealth, power and knowledge. However, in practice, Hindus often worship Goddesses in groups. In these groups, individual Goddesses may not have unique characteristics. What matters is the whole. For example, during Navaratri, people worship Nav Durgas. This worship of Goddess clusters has a long history.

Sometimes the collective has only two women as, during Ganesha puja, his mother Gauri comes, like many Vedic Gods, as a pair: the elder mother who is Tantrik and the younger mother who is Vedic. At other times, the motif is a kingdom of women, where no man can enter, only a true man like Hanuman or Nath Yogi can enter. This motif is common in folklore but not found in Puranic traditions.

We find a reference to the Kritika constellation, in the Rig Veda. They are identified as seven sisters. In Puranic mythology, Kritikas are identified as wet nurses to the son of Shiva and Shakti, known as Murugan in Tamil tradition. Because they took care of him, he is also known as Kartikeya. Now, the Kritikas have an interesting story. They were seven sisters married to seven brothers. The seven brothers were the Sapta Rishis which forms the Big Dipper constellation that can be seen in the Northern sky, near the Pole Star. The seven sages and their wives lived together, until one day the Sapta Rishis accused six of the sisters of infidelity —by saying they preferred the love of Agni — and betraying the vows of marriage. They were thrown out of the house. Only one of the seven sisters remained with the seven stars. This star is Alkor or Arundhati. The remaining six moved away from them towards the eastern horizon to form the Pleiades Constellation. These Kritika stars are considered to be ferocious Goddesses who cause miscarriages in women or measles in newborns, unless they are worshipped as caretakers of Kartikeya, rather than as abandoned wives of the seven sages.

In the Puranic traditions, of course, the cluster of Goddesses is elaborated as the Matrikas. The Matrikas are, sometimes, identified with the Kritikas, but more commonly are seen as the female form of various Gods, like Indrani of Indra, Brahmani of Brahma, Vaishnavi of Vishnu, Narasimhi of Narasimha, Varahi of Varaha, Shivani or Maheshwari of Shiva. These various female Gods join Durga, in the battle against the various Asuras. These Goddesses became powerful as the influence of the Goddess increased in Hinduism. Another cluster that is popular nowadays is the Tantrik cluster of Maha Vidyas, the 10 wisdom deities. Some of them are the young Sodasi, the 16-year-old, or Kamala, the full-blown lotus woman, or Dhumvati the old hag, or Baglamukhi, who pulls out the tongue of the silver-tongued liar.

The idea of multiple women also come from folk literature as the Yoginis. There are the 32 Yoginis that are fixed on the throne of Vikramaditya who will destroy unworthy men who dare sit on the throne. There is also the Chausat Yoginis or 64 Yoginis who play music around Shiva while Shiva dances for them. It is the reverse version of the Krishna Maharaas, where Krishna plays the music and the gopikas dance around him. In the Yogini Mandala, the woman plays music while the man dances.