Home » Feature Articles » A grandson’s tribute to his dearest grandmother: A Silent Sentinel 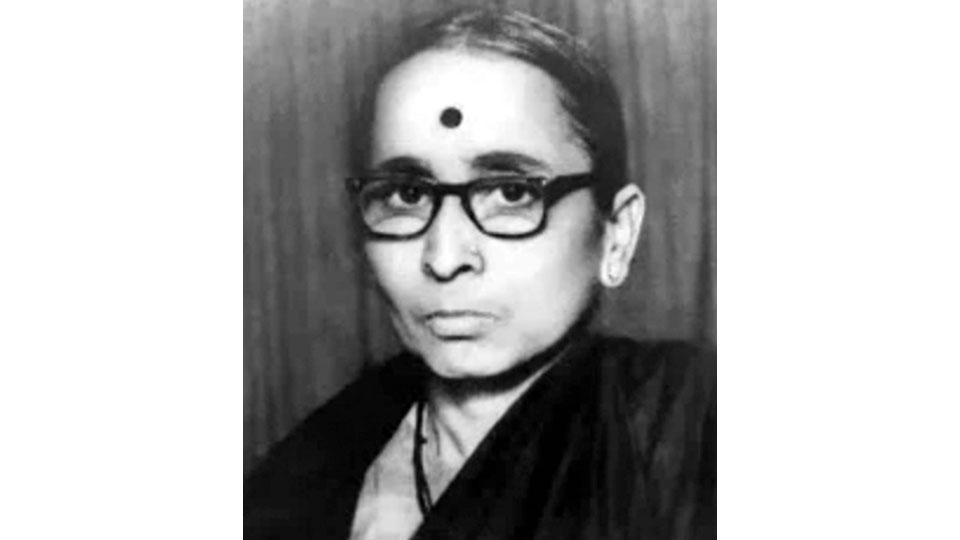 A grandson’s tribute to his dearest grandmother: A Silent Sentinel

My grandfather Dr. S. Srikanta Sastri was an extraordinary scholar in his own right. Yet, he was also a husband, father and a grandfather to us all. Behind this colossus was a sweet, petite, gentle soul who quite literally ran the Sastri household single-handedly, when her husband was engrossed with the rise and fall of civilisations. This lady belonged to a household in whose premises in Andhra, young Sathya Sai Baba suffered a scorpion sting and had his moment of realisation! She with her single-minded devotion dedicated herself to seeing Dr. Sastri’s family through rationing, disease, world war and an untimely death of their young son. This is a small tribute to my dearest grandmother  Smt. Nagarathnamma.

It is a well-known quotation that behind every successful man there is a woman, it could be a wife, mother or sister. Smt. Nagarathnamma, wife of the famous historian Dr. S. Srikanta Sastri, was born into a rich zamindar family in Uravakonda (present day Ananthapur district, Andhra Pradesh) on 21st November, 1915.

Her father was Narayana Sastri and mother was Hosur Nanjamma. Father was a great devotee of Bhagwan Sri Ramana Maharishi and he also had a famous tenant in Puttparthi Sai Baba aliasSathyanarayana Raju.

Baba’s elder brother taught in the local high school and Baba entered into a trance after being stung by a scorpion on Friday, 8th March 1940, in Narayana Sastri’s house. Soon he began to perform miracles andalso had the powers of predicting the future.

Smt. Nagarathnamma married S. Srikanta Sastri in 1924, when she was just nine years old! On her mother’s side an uncle by name Rupanagudi Narayan Rao was an established Telugu littérateur credited with writing many plays and other translation works including a work of Herbert Spencer. Another uncle Hosur Subba Rao’s son Dr. H.N. Murthy became a foremost Psychologist in India.

She came to live with S. Srikanta Sastri at the age of fifteen and bore him four sons and two daughters. This family in the 1930s was a nuclear family and she had to take the whole burden on herself.

Smt. Nagarathnamma had received only a primary school education. She learnt playing harmonium from a teacher and also learnt to read, write and speak chaste Kannada. She appears to have groomed with her motherly care, the well-known freedom fighter and author Y.G. Krishnamurti and the well-known Director General of Archaeology Dr. S.R. Rao, who lived in the same building.

In those days a rare social custom called ‘Varadanna’ prevailed in the Brahminical families. A few economically weaker students were given free meals once a week by a particular family. If a student received this benevolence from seven families, it sufficed the mess expenditure of that student.

Smt. Nagarathnamma enthusiastically co-operated with her husband Prof. Sastri in feeding several such students for a number of years. Some of  them went on to become famous writers and publishers. Though an orthodox brahmin lady, she often played host to Dalit students without any hesitation in 1950s.

When her first son suddenly died at the age of 17 because of a heart attack, she stood like a rock behind her husband and family during this emotional crisis. She was known for her compassion, friendly nature and had immense sympathy for the poor and dumb animals. Once when her son narrated a sad film story (Kannada: Gejje Pooje) she wept profusely without even having seen the film. She always welcomed guests, relatives and students into her house and mind you, her husband’s salary was only Rs. 125 !

The whole family went through the privations of Second World War and the cruel  rationing systems. Her husband was a workaholic and spared no time for running the family. The education and marriages had to be conducted by the lady of the house.

When Dr. S. Srikanta Sastri suffered a paralytic stroke and a heart attack, she served him diligently. Her husband’s fame and popularity did not affect her in any way.

A quarrelsome shrewish neighbour lady tormented and harangued the gentle, sensitive and soft-spoken Nagarathnamma to no end, but to derive sadistic pleasure. This cantankerous lady left the neighbourhood and went to live somewhere else in Mysore. After many years she suddenly made her appearance before Dr. Sastri’s house much to the chagrin of the family members.

This quarrelsome lady took permission to enter the house with a tray full of fruits, flowers and a saree. To every one’s surprise she prostrated before Smt. Nagarathnamma and held her feet and wept uncontrollably. She wanted Smt. Nagarathnamma to forgive and forget her pointless nasty behaviour!

Smt. Nagarathnamma suffered from acute gallbladder stones and passed away on 9th March 1973 at the age of  58 years.

Dr. Bhagirath S. Naganath Dr. S. Srikanta Sastri Nagarathnamma
Make the best of what one has
A Flashback to 1965…