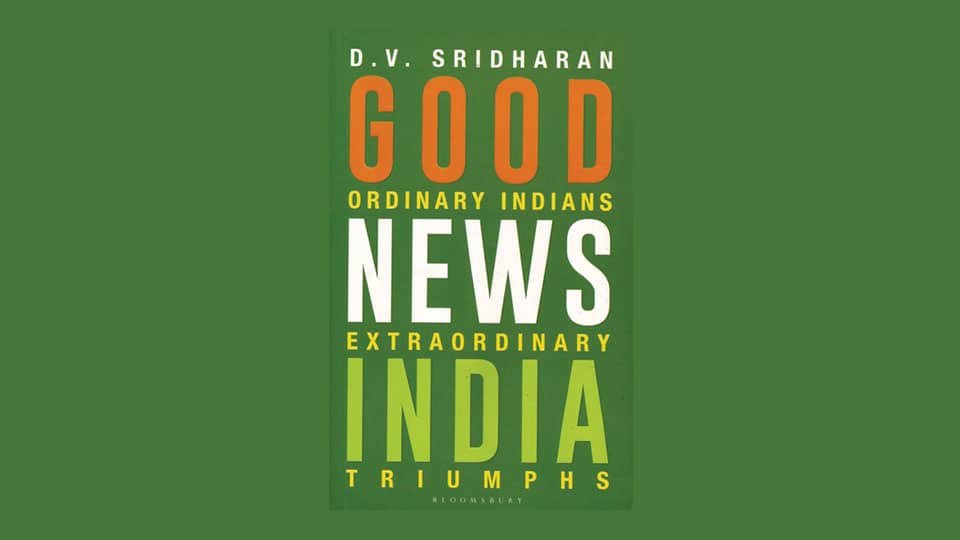 A Mariner’s Tryst with Real Heroes

This is a media impacted world. Information is no more merely a News, but a means of shaping the opinions of even an ordinary citizen. Media changed the direction of life of D.V. Sridharan, a trained marine engineer. After a decade of service on the sea and across the world he returned home in 1970 to confront mostly  negative news. A personal tragedy made atmosphere more painful and  more depressive. All the time he is wondering as to ‘how has the civilisation endured these 5,000 years?’ Reading of book River Sutra by Gita Mehta takes him to the origin of  river Narmada in Amarkantak. Accidental meeting of a saintly person, Nagaraja Sharma at Amarkantak catapults the author from disenchantment into a world giving meaning to life. Author becomes a hunter and partaker of ‘only Good News’.

Y2K scare had given birth  to a new channel of communication, the internet. Author being a trained engineer, lapped up internet. Despite financial crunch the author, living on Rs.2,000 a month, buys an expensive Kodak DC 215 camera costing Rs.33,000 and travels around the country in search of positive stories of unsung heroes.  And Good News India [GNI] social networking channel was born.

This self-appointed news hound sets certain ground rules for himself — 1. No news on cricket, movies or politics, 2. He would publish nothing that he did not personally verify, 3. He would seek no sponsors or investors,  would drive it all with his money. 4. He must always give full contact details, including driving directions wherever necessary. The resultant 25 true stories of real but unsung heroes of India is presented in this book. Every story narrated in this book is wholesome and  very inspiring.

Stories start with Anna Hazare, who was a retired army truck driver but went on to transform a draught struck very poor Ralegan Siddi  village into a village of holistic development.  Abdul Kareem’s successful conversion of five acres of ‘barren rock land with a pathetic well’ into lush garden of variety of plants and trees leading to increased water table all around.

A similar story of Cherkady Ramachandra  Rao of Brahmavar is narrated in a very illuminating way. There are stories of Debal Dev’s obsession to protect indigenous varieties of seeds at great personal sacrifice and costs and Manibhai Desai’s NGO, Bharatiya Agro Industries Foundation [BAIF] and co-operative banking which revolutionised Urulikanchan into a model village attracting a lot of investments. Story of Bishnois of Rajasthan tells about their extraordinary love and commitment for environment and animals. There is also reference to Salman Khan and his Black Buck hunting incident.

There is a story of Girish Bharadwaj, an engineer who was accidentally drawn into building village bridges, which was never his specialisation! Bharadwaj self-learnt building bridges technology and built them at very  low costs rendering yeomen service to the villages all round the country.

Story of Tree Thimmakka and Chikkanna is about persons who raised hundreds of tree in place of the child they could not have. Story titled A Daughter Returns is about one Anuradha who grew up in plush environs, but whose forefather was an indentured labourer in Mauritius in 1871, and her ProjectWhy in Delhi’s Giri Nagar slums; Clothier to the Poor story narrates the underbelly of Delhi during winter and how  young journalist couple, Anshu and Meenakshi, started the NGO  Goonj to cloth the hapless poor by recycling tons of old clothes donated by the compassionate citizens.

The arrangement of the book is quite interesting and innovative. It is partly auto-biographical  and partly empirical.  Author  has very cleverly sandwiched his 25 Real Heroes stories between his  two autographical sketches. Sridharan starts with Prologues in six parts  providing  the background to the launch of Good News India [GNI].  After the captivating  stories of real heroes he re-links and completes his life experiences in  Epilogue titled Revisiting an Ignored Message.

Sridharan has a mesmerising style of storytelling which makes the book very captivating. The fact that many of these heroes became well-known only after the author had first published them on his news channel GoodNewsIndia, and two of them — Girish Bharadwaj and Thimmakka — thereafter were honoured with the Padma Shri Award, is a commendable contribution indeed.