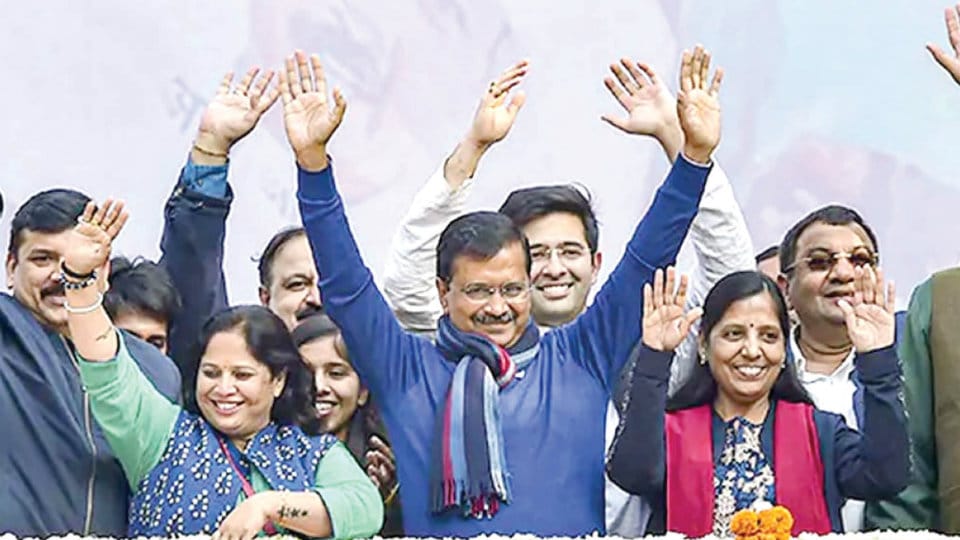 Many may remember in 2013 the National parties, BJP and Congress, first ignored them. Then they ridiculed them, with the BJP calling them a ‘chillar party’ and Congress calling them ‘mango people.’ Then they dared them to fight an election. Then the mangoes won. And they have not stopped winning ever since.

Not to sound corny, but Aam Aadmi Party’s success in Delhi is an  ‘aam-azing’ feat! Especially, in the face of their only opposition in Delhi, the BJP’s, vicious and vitriolic verbal assault.

In early October of 2012, one of India’s greatest entrepreneurs, Robert Vadra, son-in-law of Congress Party President, scoffed at members of a movement called India Against Corruption (IAC) when they questioned his links with DLF, a realty company, saying “Mango men in a Banana Republic.” It was obvious Robert Vadra was mocking Arvind Kejriwal who was still part of the IAC but was planning to form Aam Aadmi Party.

Then on October 5, I saw an interview of the then Law Minister on NDTV and a BJP leader’s press conference on another TV channel that made me, for the first time, donate money to a political party — Aam Aadmi Party, which came into existence a month later in November.

What I saw on NDTV was the then Law Minister of India Salman Khurshid reacting to Kejriwal’s allegation against Vadra, where the Law Minister said, “We will teach Kejriwal a lesson” and calmly dismissed any chance of a probe into Vadra’s DLF deal.  As if that wasn’t embarrassing enough, he went on to say, “Hum jaan bhi denge” when asked about defending the Gandhi family. One would assume education rids a man of a subservient                 mindset, but alas!

Soon, BJP’s Ravishankar Prasad came on TV with nostrils flaring and vocal chords blaring against Congress Party’s corruption. But I could not forget how BJP’s L.K. Advani, when he was the Home Minister during NDA Government, speaking of the then BJP President Bangaru Laxman taking a bribe, casually said, “It was just one lakh!” While Ravishankar Prasad kept speaking of the Congress “damadh’s” corruption, I could not help but wonder why the BJP Government in Himachal Pradesh approved  land to Congress’ “Yuvarani” Priyanka Gandhi Vadra, when there is a law that prohibits sale of land to non-indigenous people?

It was obvious, rotten apples were ruling us and we needed a shot of mango-madness. And mango madness is what we got.

READ ALSO  Up in Arms - Pit

Kejriwal won in 2013 but soon lost his mind conducting chaotic press conferences and spewing random allegations between bouts of chronic cough. Soon the AAP disintegrated and the Government fell. Kejriwal had been CM for just 49 days.

Many of my colleagues mocked me for donating money to the ‘joker in a muffler.’ By the way, when I tried to make a donation to Aam Aadmi Party through their website, it was declined with a message saying the party had met their fund requirement! I never expected a political party, that too a young one, to say no to money. All the same I was glad they declined my donation as it would have been wasted, considering the way Kejriwal was behaving.

AAP won again in 2015 but the Kejriwal drama started again and just when I thought the best hope for a new kind of politics was over, suddenly in 2018 it was “Natak bandh, Kaam shuru!”

Kejriwal had become calm and his cough had stopped along with his chronic proof-less accusations. AAP went into a development-spree and in 2020, Delhi voted them for it.

Of course, AAP does not practice a ‘new kind’ of politics. They too cater to vote banks. After all, it was AAP who figured out the power of ‘Purvanchali’ vote bank in Delhi. While BJP and Congress were still stuck giving tickets to Punjabi-Baniya candidates, AAP gave 15 tickets in their very first outing to Purvanchalis — immigrants from East UP and Bihar. It helped.  It is after this that BJP made Manoj Tiwari, a Purvanchali, the                                         Delhi BJP President.

Of course, political pundits say because of CAA, Muslims voted for AAP as their traditional choice, Congress Party, had no chance to take on BJP. That’s unfair to the AAP voter. AAP may have won by a better margin because of Muslim votes, but AAP won because they have done people’s work.

Yes, they have also given freebies, such as electricity up to 200 units, water up to 20,000 litres, free Wi-Fi, free bus ride for women and a free pilgrimage scheme, but most importantly AAP made Government Schools as good as the Private Schools. And when you make life better for children you have their parents’ vote.

Today teachers in Delhi get the same facilities during training as that of civil servants. Unlike other States where the Cabinet Ministers go on junkets, in Delhi, Government School Principals are sent abroad for training. 300 Principals were sent to Cambridge University for training. And 26 percent of Delhi Government’s budget is for education — the highest in the country.

Apart from infrastructure and teachers’ quality, the Delhi Government has become experimental in its syllabus. They have launched a ‘Happiness Curriculum’ to help students learn to be positive and increase their ‘emotional quotient.’ For the next year, there is a plan to launch an ‘Entrepreneurship Curriculum’ for students of Class 9 and above.

AAP today is what many of us saw in Modi-led BJP in 2014. Today, while AAP speaks of vikas and delivers it, Delhi’s BJP speaks of golis and an impressionable young man shockingly delivers it !  While AAP was sprucing up local Government Schools, BJP was speaking of National security issues. That is why AAP won.

But this AAP model will not work in other States, at least for now.  Also, AAP has the same advantage that BJP has — Leadership vacuum in Opposition. Like how there is no opposition leader to match Modi at the Centre, there is no leader in Delhi to take on Arvind Kejriwal.

That said, it is naive that some media outlets, after AAP’s victory, put out headlines such as,  “Beginning of the end of Modi.” The fact is voters seem to have developed a triple voting mindset. Vote one way for Lok Sabha, another way in the Vidhana Sabha and yet another way in Muncipality elections. So, for people who are celebrating AAP’s victory thinking it’s the end of Modi, be prepared to be disappointed.

But for now, I can’t help but recall Kejriwal’s prophetic reply to Vadra’s mango man tweet in 2012. He had said, “One day mango men will prove to be the nemesis of the powerful.” And now, eight years later, the mango man has not only ended Congress Party’s 15-year rule in Delhi, but also extended BJP’s wait to rule Delhi from 22 years to 27 years. AAP has indeed become the nemesis of the powerful in Delhi.

AAP’s victory is an important one. It gives hope for politics of development. As a journalist who has become a perpetual cynic, I have a renewed sense of hope in AAP’s victory and I am reminded of Nehru’s words: “A moment comes, which comes but rarely in history, when we step out from the old to the new, when an age ends and when the soul of a nation, long suppressed, finds utterance.”

On Feb. 11, 2020, the utterance at least in Delhi, was this: Power is begotten by serving your people not from the barrel of a gun or venom of your tongue. Jai Hind!

P.S.: Meanwhile, let’s hope AAP’s victory forces BJP to go back to its vikas model of 2014, instead of the bakwas model they tried in Delhi.