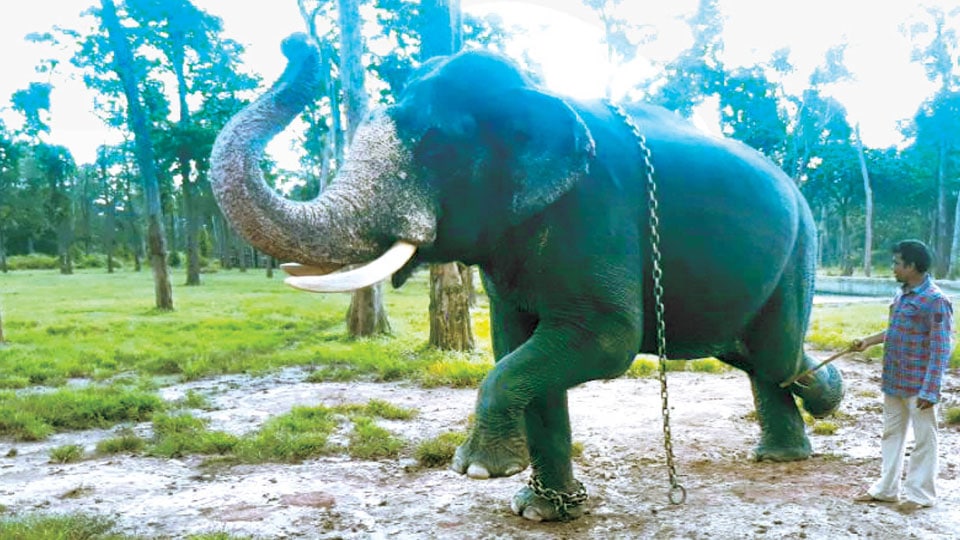 Mysore/Mysuru: The team of five elephants, led by Golden Howdah-bearer 53-year-old Abhimanyu from Mathigodu Elephant Camp, is all set for this year’s simple Dasara celebrations.

The grand Dasara procession (Jumboo Savari), which was the cynosure of all eyes every year, will be limited only to Mysore Palace this year due to COVID-19 pandemic.

As of now, the five Dasara elephants — Abhimanyu, Kaveri, Vijaya, Vikrama and Gopi — are being readied at their respective camps and special nutritional diet is already being provided to them and weight training and other exercises have commenced for Abhimanyu. As the State Government has decided to celebrate Dasara in a simple manner this year, there would be no grand ‘Gajapayana’ ceremony this time and the elephants would be transported to Mysuru in trucks.

Abhimanyu: This Dasara, the responsibility of carrying the 750-kg Golden Howdah (Ambari) with the idol of Goddess Chamundeshwari placed inside it, is on Abhimanyu, the 53-year-old fearless Combing Operation Specialist, who is housed in Mathigodu Elephant Camp.

Abhimanyu, who has shown no fear, while capturing rogue elephants in the State and also at Maharashtra, Kerala and Andhra Pradesh, has also successfully participated in combing operations to capture tigers and also to drive wild animals back to forests.

Abhimanyu is 2.68 mts. tall, 3.51 mts. in length and weighs about 4,870 kg. He was captured at Hebbala Forest area in Kodagu in 1977. Abhimanyu never allows anyone to venture near it except for his Mahout J.S. Vasanth and Kavadi Raju. He is taking part in Dasara festivities since 18 years by pulling the Police Band carriage during Jumboo Savari. Though pulling of the carriage has been stopped since four years, Abhimanyu continued to take part in the procession, drawing the attention of all for its majestic walk. Its microchip number is 00063DEE73.

Kaveri: The 41-year-old ‘Kumki’ elephant has successfully taken part in the Jumboo Savari by moving next to Balarama, who used to carry the Golden Howdah earlier, will be participating for the seventh time this year.

Kaveri is 2.50 mts. tall, 3.32 mts. long and weighs about 2,820 kg. She was captured in 2009 Adinadur Forest area near Somwarpet in Kodagu and is now housed in Dubare Elephant Camp under the care of Mahout J.K. Dobi and Kavadi Raghu. Her microchip number is 00063DC290.

Vijaya: 61-year-old Vijaya was captured in 1963 at Dubare Forest area and has participated in Dasara since nine years. She is 2.29 mts. tall, 3 mts. long and weighs about 2,770 kg. Kaveri, who is mild natured and well-behaved, is housed in Anekadu Elephant Camp and is taken care by Mahout Bojappa and Kavadi Annaiah Doreyappan. Her microchip number is 00063DF26D.

Vikrama: Captured at Doddabetta Forest area in 1990, Vikrama, who is 46-years-old, has an experience of participating in Dasara for 13 times. He was elevated as ‘Pattada Aane’ three years back after the then ‘Pattada Aane’ Gajendra created ruckus as it was in musth. Vikrama is 2.60 mts. tall, 3.43 mts. long and weighs about 3,820 kg. He is housed in Anekadu Elephant Camp and is under the care of Mahout Rajamani and Kavadi Hemanth Kumar. His microchip number is 00063DE2F7.

Gopi: 37-year-old Gopi is participating in Dasara for the seventh time. He was captured in 1993 at Karekoppa Forest area and is now housed in Dubare Elephant Camp under the care of Mahout Sari and Kavadi Appaiah. He is 2.92 mts. tall, 3.42 mts. long and weighs about 3,710 kg. His microchip number is 000643587E.