Home » Uncategorized » Abhimanyu-Vasanth bonhomie is there for everyone to see 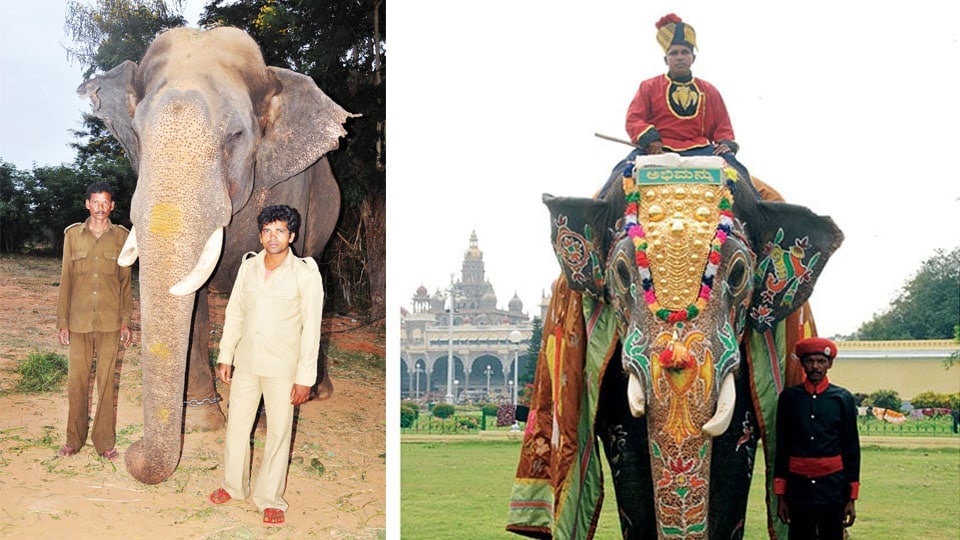 Abhimanyu-Vasanth bonhomie is there for everyone to see

Mysore/Mysuru: The camaraderie between an elephant and its Mahout is critical for the success of any mass event like Dasara. Usually, a Mahout takes on his family profession when he is assigned an elephant early in his life and they remain bonded to each other throughout their lives.

Each elephant has a personality of its own, complete with idiosyncrasies and the Mahout takes years to master his craft.

While there are many examples and legends of elephant-Mahout bonding, one pair that is in the news of late is Dasara Howdah Elephant Abhimanyu and his Mahout J.S. Vasanth. The bond has only grown closer and emotional after Abhimanyu began carrying the Howdah.

Abhimanyu has turned a champion in all the forest operations including umpteen tiger captures and has also managed the Dasara affairs successfully, presenting the spectacular Mysuru culture to the world by carrying the 740-kg Golden Howdah with ease.

The 56-year-old fearless Combing Operation Specialist,  Abhimanyu is usually housed in Mathigodu Elephant Camp in Kodagu district. He is 2.68 mts. tall, 3.51 mts. in length and was captured at Hebbala Forest area in Kodagu in 1977.

Abhimanyu never allows anyone to venture near it except for Vasanth and Kavadi Raju. He started Dasara participation by pulling the Police Band carriage during Jumboo Savari. The carriage has been stopped now.

“When Abhimanyu began carrying the Howdah, I never had the experience of guiding any Howdah elephant in Jumboo Savari and I was nervous. But it was Abhimanyu who instilled confidence in me and be successful in fulfilling my responsibility,” claimed Vasanth.

Vasanth said that his father Sannappa, who was the Kavadi of Arjuna, was appointed as the Mahout of Abhimanyu after he (Abhimanyu) was captured in 1977. It was here that he developed his relationship with Abhimanyu. “We share a special bond and I have been with him since my childhood. I can proudly say that because of the bond between us, we have been successful in many elephant and tiger capturing operations,” he explained.

“We are like two bodies and one soul; we cannot live without each other and I can say when he is happy and when he will throw tantrums. He is a gentle giant and majestic like the mythological Abhimanyu known for his prowess,” said Mahout Vasanth.

Abhimanyu has participated in more than 125 wild and rogue elephant capturing operations and in over 15 tiger trapping tasks. “Abhimanyu is daring. No matter how rouge the elephants are, he takes command and executes the task successfully,” Vasanth said.

Recalling an incident where Abhimanyu had saved his life in a tiger-trapping operation, Vasanth narrated, in 2002, a tiger was injured by a snare kept by hunters at Sunkadakatte inside the Nagarahole Tiger Reserve.

“The tiger was holed up inside a bear cave at Mastigudi in D.B. Kuppe Range and it had created fear psychosis among the tribals as it was unable to hunt and might attack human beings as they are soft targets. The Forest Department launched an operation to capture the tiger and Abhimanyu joined the operation along with Arjuna, Bharata and two female elephants,” Vasanth said.

“As we neared the bear cave, the tiger, alerted by its keen sense of smell, roared. All the elephants except Abhimanyu fled the scene. Abhimanyu stood ground and finally, doctors were able to fire tranquilliser darts at the feline and it was rescued,” he revealed.

According to Vasanth, Abhimanyu has a do or die attitude and protects its Mahout and other people in case their lives are in danger. “Many times, during wild elephant capture operations, the wild pachyderms try to attack us. But Abhimanyu comes in between and prevents the attack. There are many instances where Abhimanyu attacked the wild elephants that were charging at us,” he said.