Home » Feature Articles » Aborted English Tour was disappointing while we were chanting Yeh Dil Maange More! upon our victory at the Oval 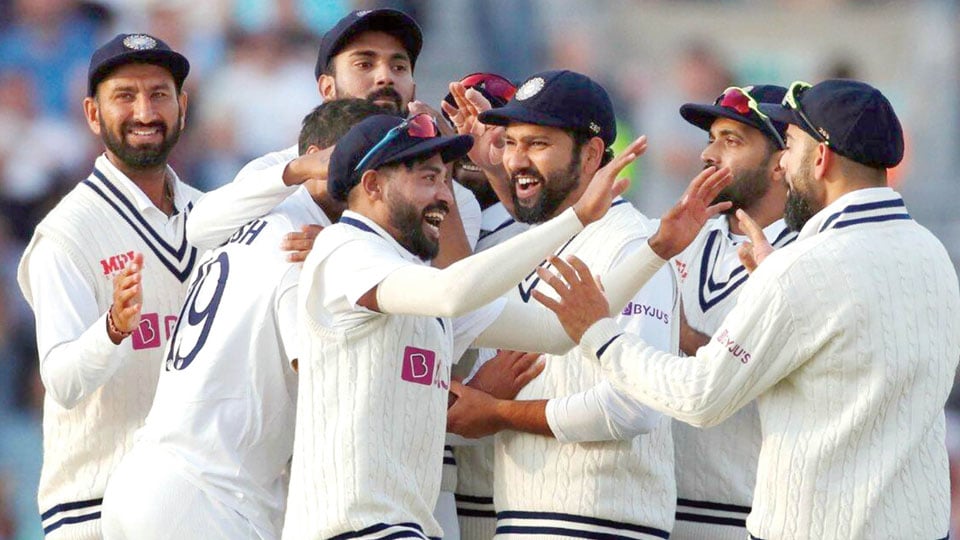 Aborted English Tour was disappointing while we were chanting Yeh Dil Maange More! upon our victory at the Oval

Ravi Shastry was imprudent in releasing his book while COVID is still active in England. He compounded the act by tagging along a few players and supporting staff to the function — all contributing to agonising abortion of an excellent series. BBCI’s offer to send our team for completing the series in July, 2022 and play five T20 matches may compensate financial losses to the ECB but it may/will not bring the excitement of the 5th Test, had it been in continuation; irrespective of the end result. Well, all is history now.

Celebrations across the country were hysteric as we beat England emphatically at the Oval. Buffs could not wait for the Manchester Test to commence. Dreams were afloat looking forward to a 3-1 victory. A couple of hours before the toss, there came the shock — “5th Test called off due to COVID constraints.” It was a disappointing end to the current English tour; especially when India was leading 2-1; the best that we have achieved on English soil till date. England had a providential escape at Nottingham; the 1st Test; where the last day was washed off, with India needing merely 156 with 9 wickets in hand. Else, we should have been 3-1 in the series. Congratulations to Virat & Co on this magnificent feat.

Our new ‘Opening Pair’ looks fairly well settled. Riveting partnerships between Rohit and KLR provided the initial momentum; thanks to the dropped catches. Virat started with assurance, but could not convert to big scores. Rahane and Pujara are well past their mettle/ prime and need grand ‘Fare-Well’. ‘Tail Enders’ batted majestically that enabled our victories both at Lord’s and Oval. Rich complements to Shardul Thakur whose three 50 plus knocks were sheer class in our 2-1 lead. His abilities to cut, drive and pull are of top class. We salute him. Going forward, he and Washy Sundar should be carefully groomed as ‘All Rounders.’

English batting was lackluster. Barring the absolute brilliance of Skipper Root, none in the English side looked comfortable. Different permutations and combinations in Dom Sibley, Zak Crawley, Dan Lawrence, Haseeb Hameed, Dawid Malan and Moeen Ali could neither consolidate the top nor the middle order. In the melee it was the resoluteness and sheer class of Joe Root that made the difference.

This article would be incomplete without a paragraph dedicated to Root. Skipper Root makes batting look ridiculously easy. In the year 2021, he has six centuries to his credit. He stands proud and tall over every other batsman in this series. In 5 innings, he has an aggregate of 507 runs at an average of 126.75; and with three brilliant back to back centuries and has aggregated 9,278 Test runs.  He is a ‘touch’ player and plays late. Anything short of good length, he strikes between backward of point and slips cordon and powerfully so. He is very agile off the toes and off the hips too. Only when deliveries are absolutely of full length does he lean to drive gracefully. Never an aggressive player, he looks clam and composed in every geographic condition across cricketing world. Just read his 2021 record. 228 and 186 in Galle. 218 at Chennai. 109 at Nottingham. 180 at the Lord’s. 121 at Leeds. In this calendar year he has aggregated 1,398 runs; becoming only the 4th captain in world cricket amassing such total. Importantly and noticeably, Root controls his emotions very well and carries himself in dignified demeanour; very much unlike our skipper Virat Kohli who looks ‘over excited’ and ‘over aggressive’ on most occasions; many a time looking awkward and embarrassing. He should realise that he is the captain of one of the best sides in the world.

Our bowlers on this tour were formidable. All of them — Bumrah, Md. Shami and Md. Siraj — look a ‘World Class’ combination. In-between, Ishanth Sharma and Umesh Yadav too did their bit and very effectively. Root getting castled by Umesh, Pope’s timber getting shattered and Bairstow bamboozled by Bumrah, beauty of late outswing from Thakur taking the varnish of Rory Burns were all treat to discerning eyes. The fact that none lost the edge to create path for the world’s best off-spinner Ashwin to find a place was redeeming indeed. Salutation to Jimmy Anderson. He can exploit English conditions like none other — consistently enticing batsmen to jab and get the edge. He was very strongly supported by young Ollie Robinson. Mark Wood and Chris Wokes added to the strength. That the seamers of both sides dominated bowling attack in the series was unprecedented.

To sign off, we do hope and pray that all will be very well for the remainder of IPL 2021. Going forward, ICC World Cup should go on without any blemish. Here is wishing all our best to the players to exhibit their best and continue to provide the country the entertainment.