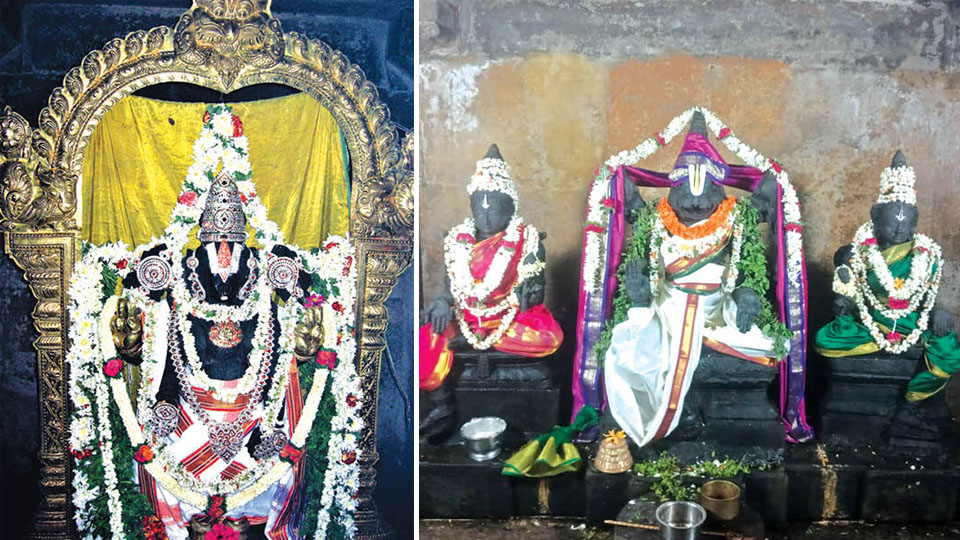 On the occasion of the 71st birthday of Prime Minister Narendra Modi, the Orissa Association Mysore (OAM), performed special puja in the ancient temple of Sri Venkateswara and Bhoga Narasimha, situated on the banks of holy river Cauvery in Belagola, Srirangapatna taluk, Mandya district,   Karnataka.

Puja was performed in an auspicious hour on 17.09.2021 at 11 am by the Archaka Sri Srikanth Bhat with Sankalpa in the name of our PM Narendra Damodardas Modi of Anuradha Nakshatra and Karkatta Rashi, with chanting of Vedic hymns and Mantras, for his long and active life with best health.

Members of OAM wanted to spread the life story of Narendra Modi — how he has worked for the country to become the Prime Minister with honesty, truthfulness and hard work, a living example for everyone. And to bow before Sri Venkateswara and Bhoga Narasimha with consorts Sridevi and Bhudevi and also before the presiding God of Odisha, Lord Jagannath to give long and safe life to Narendra Modi to serve the downtrodden Indians for a long period.

Although the temple is more than 1,000 years old and dilapidated, the stone sculptured presiding Gods and Goddesses are found in good condition, made out of Nadabramhasila. Many devotees have experienced peace of mind, tranquillity and solace while inside the  temple — even some have experienced miracles.

The temple is a property of Government of Karnataka under Mandya District Administration. In August 2003, when a few OAM members trod in to the barren land on banks of Cauvery for immersion of Lord Ganesha and simultaneously in search of a land for Jagannath Temple, miraculously discovered the dilapidated structure. And as if with Gods divine desire and explicit commands, those members of OAM decided to renovate that ruined temple without knowing which God or Goddess is presiding inside. Subsequently, with lot of efforts and running around, permission was obtained from DC Mandya for its renovation. Now first stage of renovation has been completed and daily puja of the deities is being performed since 14th April 2005.

The location of the temple is fantastic — serene surroundings, one side the murmuring Cauvery and other three sides green paddy fields. Surroundings are sacred. Along the 2.5 km road from KRS Road, there are many temples and sacred places. The Swayambhu Anjanaya, Lakshmi Narasimha and Gurukulam, Devi Maramma, the newly built Shree Swaminarayan Gurukul International School, then Srinivasa Kshetra with Venkateswara and Bhoga Narasimha and lastly the Sarvadharma Ashram, a Sufi establishment in the middle of Cauvery. With involvement from Government of Karnataka and support from public, there is vast scope of converting the area as an important tourist and religious place.

Orissa Association Mysore (OAM) is a non-commercial and socio-cultural organisation established in Mysore in the year 1993 and in the year 1998, it was formally registered under Karnataka Registration of Societies Act 1960 (no.2/98-99).

Dilip Kumar Misra Narendra Modi Orissa Association Mysore
Aborted English Tour was disappointing while we were chanting Yeh Dil Maange More! upon our victory at the Oval
Two decades of 9/11