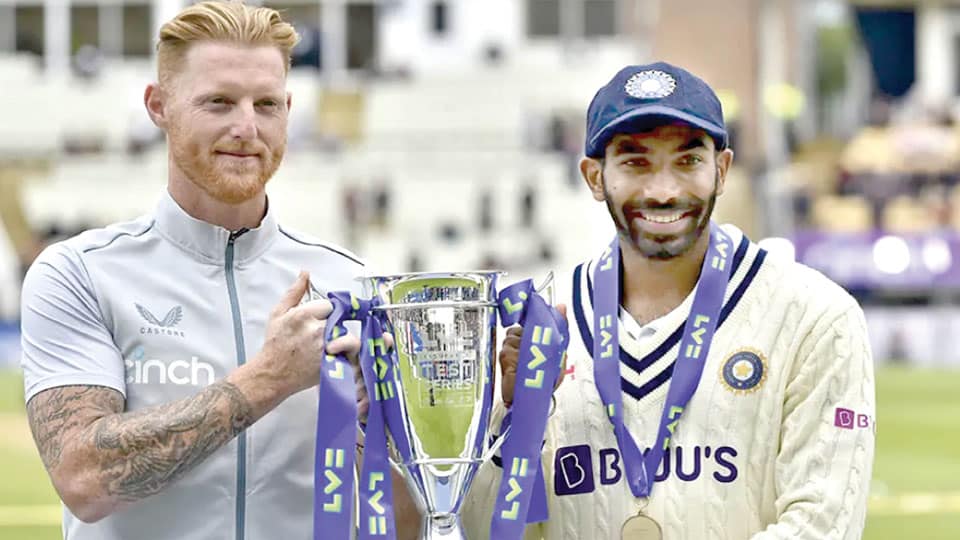 Heartiest congratulations to Team India for lifting the T20 and ODI trophies in a most convincing manner. To beat England in their backyard is a difficult task; that world acknowledges. Concluding Test at Edgbaston, Birmingham, would have been ours had our boys displayed better intensity. Well, it is always “Yeh Dil Maange More!” eventually.

Amidst some excellent performances in all the three versions, the one who stood out was our young Rishabh Pant. Undoubtedly, one needs a slice of luck to be on the top. In my early memories, I recall two such bizarre batsmen. Budhi Kunderan and Kris Srikkanth. And today, it is young Pant. All the three believe in one philosophy — “The ball is meant to be hit.” From ball number one, they would be hungry and thus vulnerable. They could throw away their wickets nonchalantly or score a hundred with gay abandon. In this backdrop, it would be interesting to take stock of the scintillating tour of England.

Concluding Test at Edgbaston: Put into bat, India looked pathetic at 98 for 5 in 27.5 overs; in a dismal display by the top. The 39-year-old James Anderson had torn through the top order as Jadeja joined Pant. Matty Potts alongside Anderson and Stuart Broad darted the cherry off the seam ferociously. As the game went on, Pant was reminiscent of his pyrotechnics at the GABBA in 2021.

In the studio, Harsha Bhogle said “Pant knows the precarious situation.” David Gower quipped “No, he doesn’t. He simply enjoys throwing his bat around.” His 146 off 111 balls with 19 fours and 4 sixes at 132 strike rate was pulsating to say the least. In sharp contrast, Jadeja stood rock solid and compiled a magnificent 104 at 53.61. Later came the “Bumrah Show” — more entertaining than a “Laurel and Hardy” comedy show — 31 off 16 balls with 4 fours and 2 sixes; victim being Stuart Broad — who probably felt as miserable or more when Yuzvendra Chahal belted him for six 6s in the World Cup.

In the melee, 416 looked a winning total. Running through the English for 284 galvanised our chances of a 3-1 finish. All our pacers Shami, Bumrah and Siraj stared in the eyes of Englishmen; akin to Wes Hall, Charlie Griffith of the WI in the 70s. But, cricket is a strange game. What followed later was pure class of the game by the English.

In the second innings, had we put 400-plus on board, we had a chance to strangulate the English. Caving in at 245, we set 378 as target. Our bowlers sprayed the ball all over in utter madness to throw away victory. But, in all fairness, Jonny Bairstow and Joe Root eclipsed all chances with brilliant batsmanship with splendid hundreds that were purely a joy to watch. They made 378 target look ridiculous in an unbroken partnership of 269 runs. Whereas Bairstow (114) hit the ball mercilessly, Root (142) caressed the cherry with a touch of class; reminding us of Port of Spain, Trinidad victory of 1976 of India against the mighty WI; chasing 402 — Sunny and Vishy belting classy centuries. Kudos to the English on their magnificent victory.

We surely missed Rohit Sharma and K.L. Rahul. Ashwin would have made a change, especially in the 2nd innings. Hardik Pandya, Surya Kumar Yadav perhaps would have made the difference. All wishful thoughts now.

Then came the T20s: Beating England by 50 runs in the 1st match was a great morale booster. Hardik Pandya – 51 at 155; looked formidable.

He is next only to Jadeja as a fielder. His 4 for 33 was most certainly the match winner. Neither Rohit nor Ishan looked promising at the top.

2nd match followed suit when we beat the English by 49 runs. Moderate contributions from batsmen gained us 170 runs. Pant belted a breezy 26 at 174. Jadeja followed with a brilliant 46 at 159. Bhuvneshwar Kumar used English conditions beautifully with 3 for 15. English were found wanting the second time — conceding the series 2-0 to us.

It would have been good to finish at 3-0.  England compiled a safe total of 215; Malan and Livingstone contributing soundly. In reply, we lost only by 17 runs. Top order collapsed. Amidst batting failures, SK Yadav belted an impressive 117 off 55 at 213; with 14 fours and 6 sixes.

The momentous ODIs that followed: 1st encounter at the Oval, London, was boring as England was bundled out for 110 in 25.2 overs. Bairstow, Root, Stokes and Buttler contributing only 37 between them. It was Bumrah Show — 6 for 19 in 7.2 overs; well-supported by Shami with 3 for 31. Rohit and Shikhar  made a mincemeat of English attack overhauling the total in 19 overs. Rohit stroked fluently. Shikhar was found wanting. Kohli disappointed.

In the 2nd encounter at Lord’s, Englishmen compiled a none-too-great 246; thanks mainly to Prasidh Krishna who bowled without any idea. If only our batsmen had simply played out the 50 overs they would have won. At 31 for 4, Rohit, Shikhar, Kohli and Pant had caved in. We lost by a huge margin of 100 runs.

The decider, 3rd encounter followed at the Old Trafford, Manchester. Thanks to Jason Roy (41), Jos Buttler (60) England put up 259 — again, not a very safe total. Pandya stole the show with 4 for 24 in 7 overs; a great effort indeed. Chasing the moderate target, our top order buckled once again — 72 for 4 in the 17th over. Rohit, Shikhar, Kohli and SK Yadav were out to poor strokes.

Later followed the “Pant-Pandya” show. The partnership of 133 between them bore a stamp of class. Pant stroked disdainfully, en route to his first ODI hundred with 16 fours and 2 sixes. Particularly 4,4,4,4,4,1 off pacer David Willey in the 42nd over were furious; to take us to victory. Pandya’s pulls and drives were powerful and from the meat of the bat. Thank you Rishabh Pant and Hardik Pandya for the convincing victory that clinched the series.

A lot of lessons in the sojourn. Top has to consolidate. As Kapil Dev mentioned, give chances to the deserving. Not on records. Rahul Dravid to be firm in team selection process. Good luck going forward.