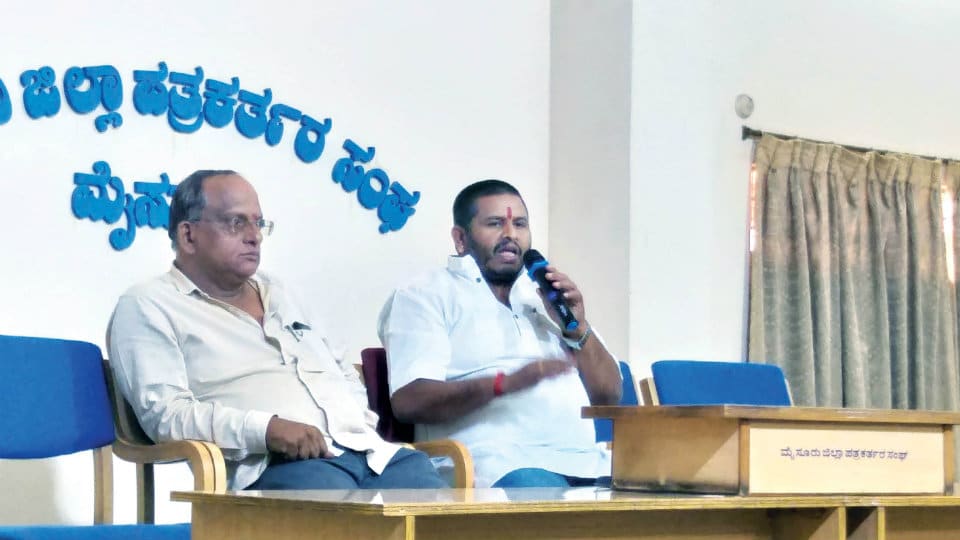 Mysore/Mysuru: People with one-track mindset cannot accept a multi-faceted theatre festival like Bahuroopi and those who criticise Rangayana Director Addanda C. Cariappa must introspect about how Rangayana was run when they were at the helm, said Mysuru Rakshana Vedike President M.K. Premkumar.

Taking on former Rangayana Director H. Janardhan (Janni), he told reporters at Pathrakarthara Bhavan yesterday that Janni demanding the sacking of Cariappa for his remarks about Tipu Sultan is ridiculous. “I strongly condemn Janni’s statement,” he said.

At an event held in city recently, Addanda Cariappa, airing his thoughts on Tipu Sultan and left-leaning intellectuals taking all benefits from Government, had said that though Tipu Sultan was considered a hero in Mysuru, in Kodagu he was responsible for killing thousands of Kodavas including his own ancestors of his family and the history of Kodagu is steeped with many atrocities on Kodavas including massacre and forcible conversions.

This was objected to by Janni who said that Cariappa had defamed Mysuru and was pursuing right-wing agenda at Rangayana. Janni demanded immediate sacking of Cariappa and said that he was speaking as a representative of a political party and not as the director of theatre repertoire Rangayana.

Objecting to Janni’s statement, Mysuru Rakshana Vedike’s M.K. Premkumar said, “What is wrong in Cariappa mentioning the atrocities on Kodavas by the 18th Century ruler Tipu Sultan? Cariappa comes from Kodagu and he has spoken how his community members were killed, tortured and forcibly converted by Tipu. Moreover, the State Government has not blindly appointed Cariappa as the Rangayana Director. Cariappa has been striving for the cause of theatre since 40 years,” he said.

Addanda Cariappa has all the eligibility and capacity to head Rangayana and theatre lovers and artistes are fully confident that he will take theatre to greater heights, nationally and internationally, Premkumar added.

“Janni must actually encourage people like Cariappa as Bahuroopi Theatre Festival on ‘Gandhi Patha’ is being organised. Instead, Janni is furthering his leftist ideology. I demand that Janni must immediately withdraw his statement against Cariappa,” he said.

Prem Kumar demanded that historical plays that reflect the desi culture of India must be staged at Rangayana and not plays that further leftist thoughts and ideologies. “Rangayana must be freed from Naxal activities and ideologies as all these years only those thoughts have been promoted through plays. Rangayana is funded by public money and there must be a probe on how the Government funds were misused to promote Naxal activities. Complete details of the funds released so far and the types of plays staged               at Rangayana must be made public,” he said.