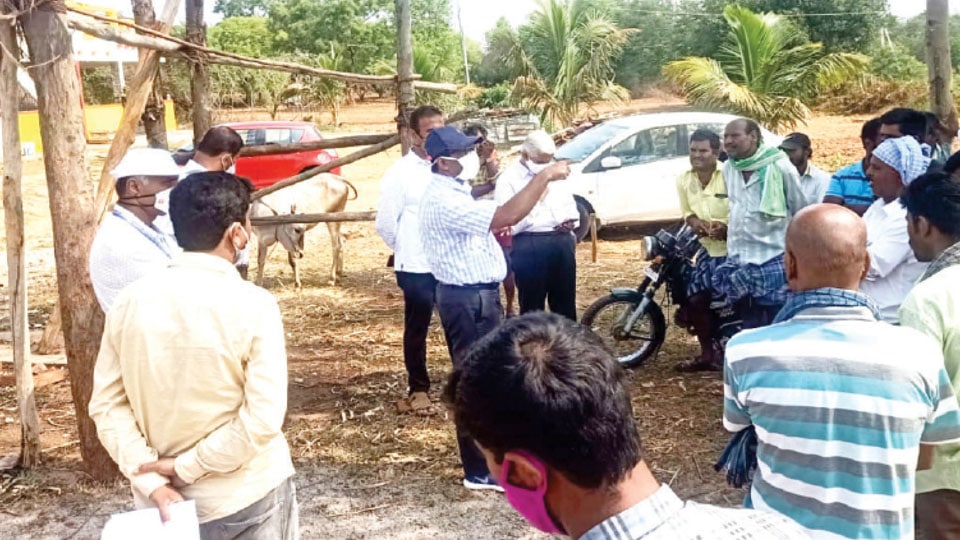 Mysore/Mysuru: After its plans for forming Ballahalli Layout proved futile due to land acquisition issues, MUDA is now gearing up for a new venture, by initiating the process of forming  Bommenahalli Layout in land coming under Bommenahalli, Seegalli and Kamaravalli villages of Yelwal Hobli in Mysuru taluk.

As a first step in this regard, MUDA Commissioner Dr. D.B. Natesh, Superintending Engineer Shankar, City Planning member Jayasimha and other officials held a meeting with farmers and other land owners at Bommenahalli yesterday. During the meeting, the officials explained the advantages of developing the Layout on 50:50 ratio basis.

Pointing out that farmers parting with their land for the layout, would get 50 percent of the sites formed in the land that becomes available after reserving space for providing civic amenities, park, open space, CA sites and STP (sewage treatment plant), they said that Title Deeds will be issued immediately for such sites and this will enable the farmers to sell their share of sites at the prevailing market rates, if they so  wished.

Noting that farmers may get only Rs.50 to Rs.60  lakh per acre if they wish to sell it to private parties as the land comes under agricultural zone, the officials told them that they would get anywhere between Rs.1.5 crore to Rs. 2 crore if they partner with MUDA in the formation of the layout. The officials further explained on the other advantages that  Bommenahalli and surrounding villages would stand to get, such as widened roads, improved civic amenities and infrastructure development, if the layout is formed.

Dr. Natesh said that the Authority has identified about 300 acres of agricultural land coming under various survey numbers of Bommenahalli, Seegalli and Kamaravalli villages and it has been planned to form a full fledged Layout by also using available Government land along with the identified 300 acres of land, in about 18 months.

After hearing the MUDA Commissioner, the farmers said that the Government will take four to five years for forming the layout. Also, after formation of the Layout, the officials make them wander to the offices for distributing  the promised sites. There are many instances where the officials have failed  to keep the promise of site distribution as agreed during the parting of land.

With officials visiting the village for a preliminary study of layout formation, the residents of the three villages are said to have started  discussions  among themselves on the pros and cons of parting with their land to MUDA on a 50:50 ratio agreement.