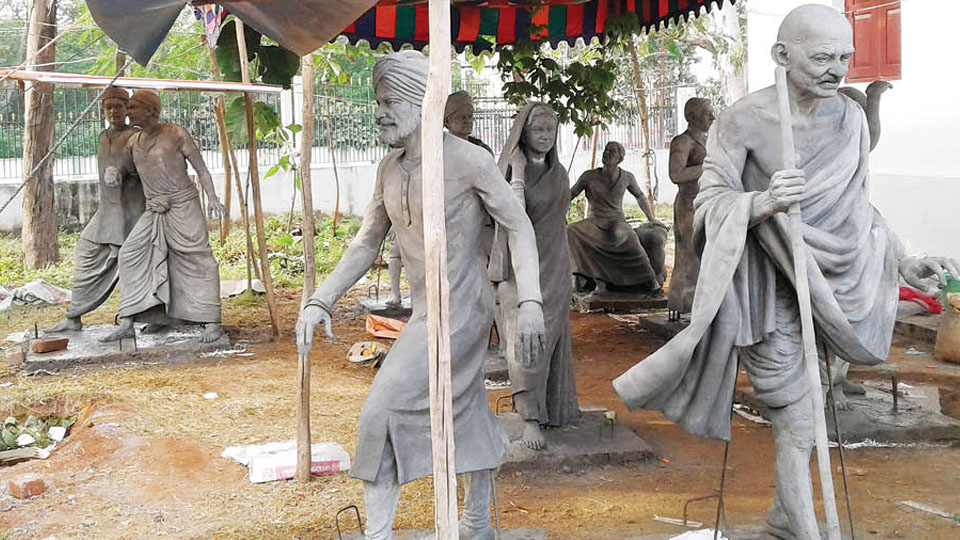 I go for my morning walk everyday in Manasagangothri. It was a heartening sight to see nearly 34 sculptors from all over Karnataka working near the Gandhi Bhavan to create many sculptures of our Father of the Nation Mahatma Gandhi in various poses and his association  with other persons in his life like Rabindranath Tagore.  It is no doubt an important addition and a treat for the visitors.

However, after seeing the statues if they were to walk around they would see the extreme contrast and one can imagine what impression they carry seeing the mess.

It is known that Gandhiji was very concerned with cleanliness, discipline and honesty. The irony of the situation is Manasagangothri which got a facelift in connection with the centenary celebrations of University of Mysore in 2017 has now lost its sheen for the maintenance has been badly neglected.

Almost all footpaths are overgrown with grass and the growth of shrubs/grass presents an ugly view. After eating, the plates are thrown around. The broken bench near the Centenary Clock Tower is lying unattended for a long time.

It is a pity that after spending such a huge amount, the whole place is allowed to deteriorate. There must be a separate maintenance unit that can monitor the whole area on a daily basis to take corrective action.

If substantial money is not invested in rectifying the defects in a precious area like Manasagangothri, it would be disrespect to the Father of the Nation who stood for cleanliness all his life.  It will diminish the stature of Kuvempu whose statue welcomes the visitors besides bringing a bad name to the University of Mysore.

Voice of The Reader
Subsidy under PM Krishi Sinchayee Yojana
“If academic atmosphere is restored, Mysore Varsity will regain its lost glory soon”