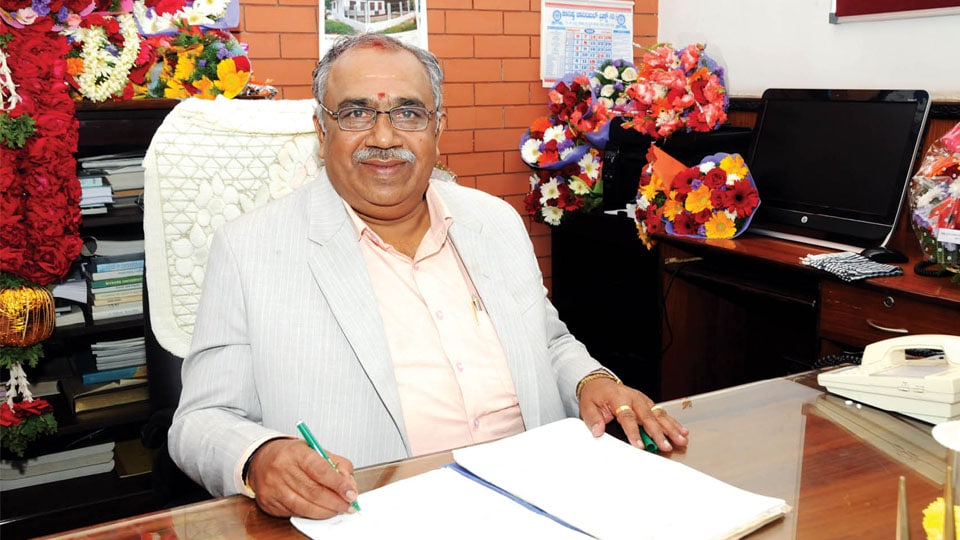 “If academic atmosphere is restored, Mysore Varsity will regain its lost glory soon”

If there was one name whispered in the corridors of the Crawford Hall for the post of the Vice-Chancellor of University of Mysore, even as the delay in appointment for the full-time VC continued, then it was that of Prof. G. Hemanth Kumar. People knowing him closely always felt that he is the right choice though he had not gained much exposure in the University scheme of things. He had been working in the interest of the institution since a long time and was also instrumental in getting many grants from UGC, say the insiders. Hence, it was not a surprise to see his name finally as the choice for the 25th Vice-Chancellor of the century-old Mysore Varsity.

‘Star of Mysore’ Reporter Pavan Murthy caught up with the newly-appointed Vice-Chancellor, late in the night on the day he was appointed and the ever-smiling, calm VC Prof. Hemanth Kumar answered all the tough questions posed to him with grace and gave confidence that the University’s lost glory would be restored. Excerpts… —Editor

Star of Mysore (SOM): There are allegations that University of Mysore has lost its sheen. What is your view on this? What steps will you take to see that it regains its lost glory?

Prof. Hemanth Kumar: If there is an excellent academic atmosphere, then on its own the University will reflect the glory. Since the last 10 years there has been no appointment of the teaching staff. First we have to draw the attention of the Government on resolving this problem. If the teaching and basic facilities are good, then it will help in improvement of NAAC (National Assessment and Accreditation Council) Grades and the prestige of the University will also be there. I will concentrate on all these issues and try to implement them.

SOM: There are charges of many irregularities occurring in the University. How are you going to manage them?

Prof. Hemanth Kumar: I will try to resolve all of them under the ambit of the law and I am confident of doing it.

Prof. Hemanth Kumar: I have information that since the UGC (University Grants Commission) gave its approval late to start the Distance Education, there was not much time left for advertising for admission. I have just now taken charge as the VC. Hence, I will try to find out why there was a delay in obtaining permission  as I do not have definite reason. In the coming academic year we will see that we will take proper steps to increase the admission.

SOM: As the new VC, what are your dreams and hopes?. Do you have any earlier VC as role model?

Prof. Hemanth Kumar: I have hopes of taking the University to greater heights. The earlier Vice-Chancellors had their own strengths and I will try to find the best qualities in them and implement the ideas during my four-year term. This is not an easy job. However, I will try to exhibit those qualities.

SOM: One of the main accusations is that there is lot of groupism in the University? You as an alumnus of the University with 32 years of experience may be aware of this. How do you react?

Prof. Hemanth Kumar: This indeed is a challenge. But I will try to diffuse the situation as and when it arises and ask all the forces to keep aside their differences and work in the interest of the University. How this can be done is something that I need to think a lot and continue the work.

SOM: There are talks that students and teachers in Manasagangothri are facing lot of problems. This has led to Gangothri becoming a centre for agitations. What is your view on this?

Prof. Hemanth Kumar: There are nearly 63 Departments offering 76 Post-Graduate programmes in Manasagangothri campus. This involves a lot of work and I will try to solve the problem at the initial stages itself once it comes to my notice. So, I have an idea of holding meetings with the students and teachers frequently to solve the problems.

SOM: Another major charge is that the standard of education has come down in the University. How much do you think this allegation is true?

Prof. Hemanth Kumar: I do not want to comment on this. But there is scope to improve activities in research, teaching and experiments. We have to think how we are going to chalk out programmes to improve.

SOM: There is a general perception that those who have occupied posts in the administration in Universities are puppets of politicians. Do you think so?

Prof. Hemanth Kumar: I do not know much about it. However, in the coming days I can assure that I will try to dispel all such doubts.

The new VC Prof. G. Hemanth Kumar began his first day in Office on Saturday by receiving a stream of visitors who had come to greet him with bouquets and garlands. Speaking to Star of Mysore, he said that he had gone to meet Higher Education Minister G.T. Devegowda in the morning and thank him for his support.

Later, he went to his parent Department Computer Science where he spent time with the staff and students. From there, he visited the Geography Department and attended a felicitation function for one of the Professors.

After returning to his Chamber at Crawford Hall and attending to some paperwork, he visited the Chemistry Department. Sources in the VC Office said that Prof. Hemanth Kumar was not new to the University and he knew it’s functioning very well.

In fact, as soon as he took charge on Friday evening, he signed a few papers.

2 COMMENTS ON THIS POST To ““If academic atmosphere is restored, Mysore Varsity will regain its lost glory soon””