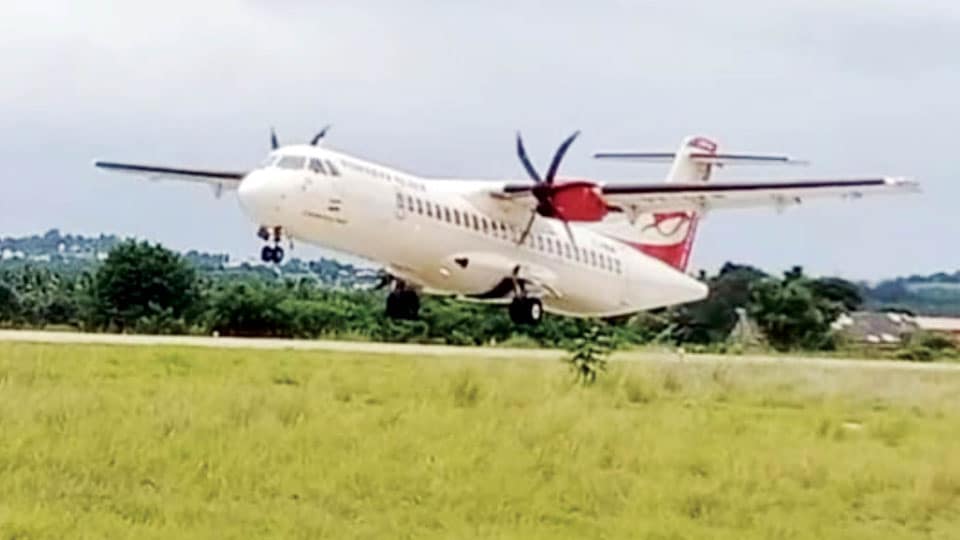 Mysore/Mysuru: Air travel bookings from Mysuru have gathered pace in the festive season offering hopes of a full revival for the sector battered by the COVID pandemic. Near-full occupancy trend started last month and now all the flights from Mysuru are taking off and landing with at least 60 to 65 passengers in a 72-seater ATR plane.

Airlines, however, remain cautious of a potential third wave, mindful of the severe dent to business during May and June this year when the second wave erased gains made in the months before.

Mysore Airport Director R. Manjunath told Star of Mysore this morning that flight services opened on a positive note and now the occupancy rates have belied negativity and pessimism and hopes have literally soared. The Airport at present handles flights to Bengaluru, Kochi, Chennai, Goa, Belagavi and Hyderabad.

“Dasara is here and as of now, most air travel falls under the VFR (visiting friends and relatives) segment. However, we are hopeful that leisure and business travel will pick up,” he said. From next week, a new flight will be introduced to Belagavi and TruJet has evinced keen interest as the airline is already operating a flight  service to Belagavi.

Likewise, Indigo Airlines has expressed interest to operate a flight to Goa as the sector is seeing traction and after the festive season, it is the year-end and Goa is the destination to be.  “We are in talks with several flight operators to include Shirdi and Tirupati on the Mysuru religious tourism map,” he said.

There is a demand for new flights to Shirdi, Tirupati and Mumbai from devotees who are heading to Shirdi Sai Baba Temple and Venkateshwara Temple at Tirupati. Also, there is a demand from the business community for Mumbai flights and talks are on with airline companies.

Meanwhile, reports from New Delhi this morning said that India will begin issuing tourist visas to foreigners coming on chartered flights starting Oct. 15 as announced by the Union home ministry. Additionally, foreign tourists will be allowed to come in on non-charters — meaning flights under bubble arrangements of flights — from Nov. 15 unless scheduled restrictions on scheduled flights are substantially lifted. As of now, scheduled international flights are suspended till the end of this month.

India had suspended foreign tourist visas last March along with suspending scheduled domestic and international flights. Scheduled domestic flights have resumed in a gradual manner since last May. Air bubbles have so far been formed with about 30 countries for air connectivity and certain categories of foreigners — except those on tourist visas — were increasingly allowed to come to India on them.

The Government’s move to resume tourist visas will be a boost for stakeholders of the struggling travel industry — airlines, hotels, tour operators and those linked directly and indirectly with it.