Home » News » All but one pass in SSLC exam in State 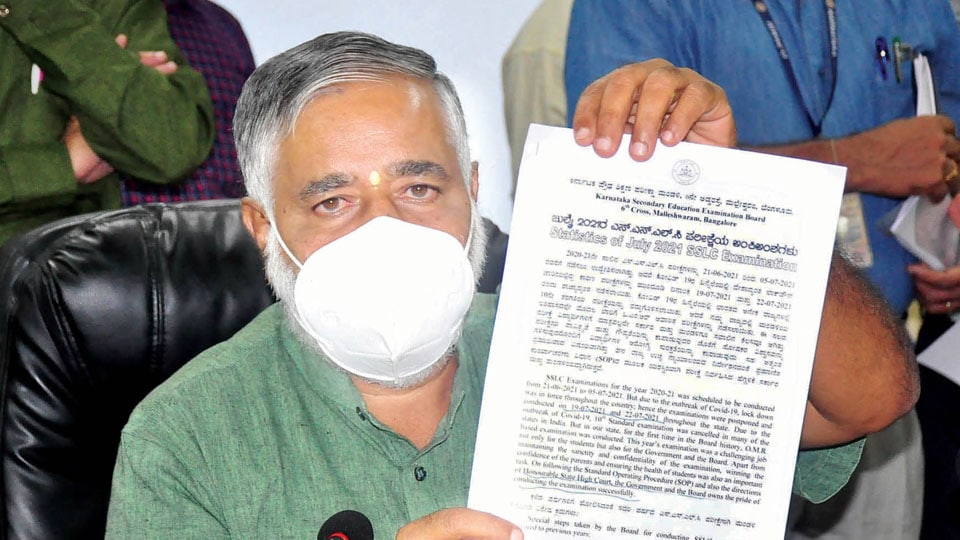 All but one pass in SSLC exam in State

One private candidate, who was caught while impersonating, fails

Bengaluru/Mysuru: In an all-time record, 99.99 percent students who appeared for SSLC (Secondary School Leaving Certificate) exam this year (2020-21) have passed.

Of the 8,71,443 students who appeared for the exam, all were deemed pass as announced by the Government that all students will be promoted, except for one student, who was caught impersonating during the exam which was held on July19 and July 22.

Announcing the results in the State capital on Monday afternoon, Primary and Secondary Education Minister B.C. Nagesh congratulated all the students. He said that provisional marks cards will be made available to students through their respective Schools.

This year, the pattern of exam was changed due to the second wave of COVID-19 pandemic. Students had to attempt multiple choice questions for all six subjects with the first paper exam on Core subjects taking place on July 19 and the second paper on Languages on July 22.

Highlighting the salient features of the exam this year, then Minister said that 100 percent boys and 99.99 percent girls have cleared the exam  which took place at 4,885 centres across the State.

126 candidates were above 50 years

“126 candidates who appeared for the exam were above 50 years. As all the students have been promoted to the next class, the Board has awarded A grade to all the 34 educational districts this year. Nine percent of students were able to clear the exam as grace marks were awarded to them. The highest grace marks given for a subject was 28 and 13 students had got it,” he pointed out and added that only six students had secured full marks (625/625) last year, when the exam was conducted with usual pattern.

Nagesh further said that 5,063 students abstained from the exam due to fear of COVID pandemic and these students have opted to appear for the exam scheduled in September.

However, the September exam will be considered as the first attempt for such students, he added. The Minister also said that Grade will be awarded this year based on the marks secured and the Grades are A+, A, B and C.