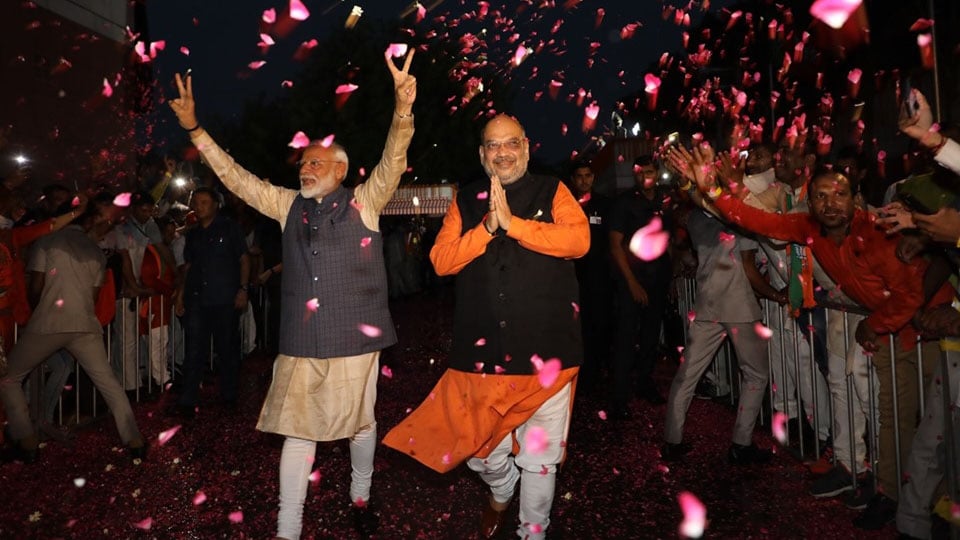 All set for the next 20 years

When the enormity of it all sank in — the overwhelmingness of the exit polls, their near unanimous predictions, and then the final numbers that burst like pellet bombs — I found myself staring into the silence of the losers.  Honesty being the best policy, I need to admit that I was with those who considered the BJP divisive and Amit Shah untrustworthy. So the latter’s stunning victory stunned me.

Four factors were more impactful than I had imagined: Narendra Modi’s strength as a public speaker, Amit Shah’s genius as a booth-level strategist, the BJP’s access to funding unequalled by any other party, and the absence of an Opposition that could stand up to the BJP.  Rahul Gandhi had become a mature politician and had campaigned energetically in recent months, but that wasn’t enough to move the mountain before him.

Give the mountain its due.  It made caste a non-issue in the North, dashing the hopes of Mayawati and Akhilesh Yadav. Mamata Banerjee’s fortress shook with the BJP gaining 18 seats in West Bengal against Trinamool’s 22; Communists scored zero.  In Karnataka out-of-power BJP alliance walked off with 25 of 28 seats.  Even the ill-famed Pragya Thakur was swept to victory on the BJP tide.  Amit Shah had said all along that his party would gain a tally of 300-plus. It did just that.  A standing ovation is due.

The power so carefully planned and attained cannot be short-lived.  It is safe to predict that the present BJP leadership will stay in power for the next 20 years, perhaps longer.  Here is the breakdown. Modi will complete

his second term in 2024. That year he will be 74 years old and Amit Shah 60. Amit Shah will succeed Modi and win two terms ending in 2034 when he will be 70.  He can remain PM for a third term until he is 75, the BJP’s official age limit. The party will have secured its moorings so strongly by then that even a broomstick it puts up would win as was said about the Congress once upon a time.

Other features may develop alongside, however. Much will depend on how the word Nationalism becomes a shaper of Democracy. This is not as simple as it sounds. Act of Folly by Lewis Lapham uses 369 pages to show how Donald Trump was “upfront and fascist in his scorn for the Democratic idea.”  He cited Italian novelist-philosopher Umberto Eco’s proposition that fascism was essentially faith-based — faith in axioms such as Doctrine supersedes reason, Science is suspect, Arguments are tantamount to anti-nationalism.

Umberto Eco had been influenced by his country going under the boots of the National Fascist Party of Mussolini. Note that name.  National Fascist. Hitler’s party was called the National Socialist German Workers’ Party. Mahatma Gandhi worked for the Indian National Congress. National was a jacket that fitted many sizes. In today’s India, it fits only one size and one colour, all others being anti-national.

Nationalism wins when it has the power to ensure that it does not lose. Psephologist-turned-politician Yogendra Yadav said, before the exit polls, that the BJP would win.  He foresaw “electoral authoritarianism where elections take place as planned but everything else that sustains a Democracy does not exist.”  He made it a lot clearer when he said: “I feel that this election will contribute to the beginning of the dismantling of our Republic.”

The rush of reports about EVMs came later. Good citizens didn’t want to attach too much importance to these reports lest it looked like sour grapism. But a former Chief Election Commissioner, O.P. Rawat, had rather disturbing things to say when he saw lorry loads of EVMs being transported in a number of centres a day after polling. He said: “There is no issue of reserve EVMs being transported during the election. From where it is coming, where it is moving to, why it is moving … It should remain where it was stored.”

But it didn’t, and I found myself in the silence of the lost.  Needing help, I turned to the Bhagavad Gita on my desk.  I learned yet again: The wise grieve neither for the living nor for the dead… He who regardeth himself as slayer and he who thinketh he is slain, both are ignorant… Unborn, perpetual, eternal and ancient, he is not slain when the body is slaughtered… For certain is death for the born, and certain is birth for the dead; therefore over the inevitable thou shouldst not grieve.