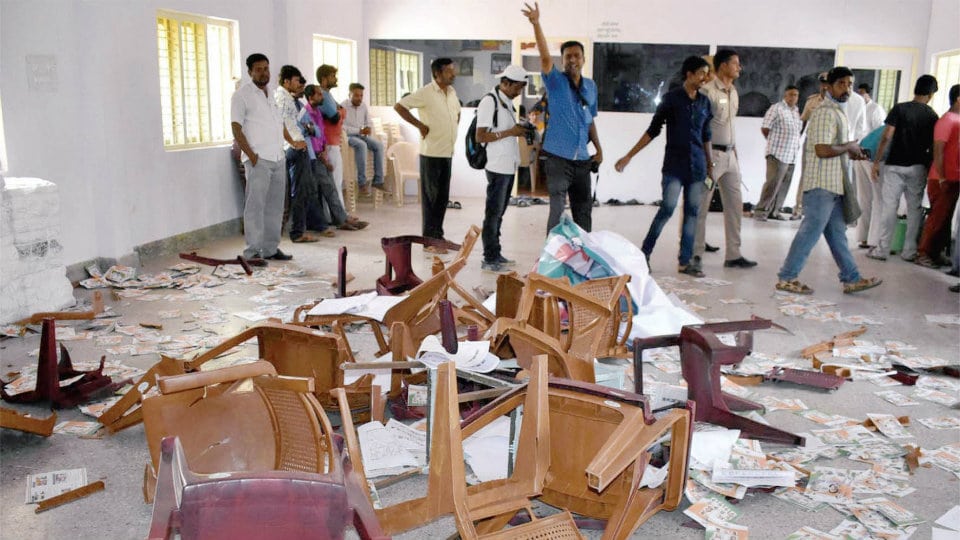 More than 30 supporters of Ravikumar, who gathered at Sanjaya Circle, raised slogans against Ambarish and the Congress party.

Later they went in a procession on Mysuru-Bengaluru Road to reach the Congress office, where they broke chairs and window glass besides destroying the party’s publicity materials.

District Congress President C.D. Gangadhar and other Congress leaders, who were at the office, were shocked by the scale of vandalism and became mute spectators.

The Police, who rushed to the spot on information, brought the situation under control. Following the incident, Police provided tight security around the office.

Based on a direction from the Electoral Officers, the Mandya West Police have registered a case in this regard.

Meanwhile, Congress leader Ganiga Ravi, who was denied the ticket, said that defeat was staring at Ambarish.

Pointing out that he campaigned for Ambarish in the 2013 Assembly polls as the actor had declared that it would be his last poll, Ravi alleged that Ambarish had cheated him on the promise of getting ticket for him (Ravi).

Accusing the High Command of issuing the party ticket to a person who had not at all applied for the same, he claimed that he would contest as an Independent candidate and win the seat comfortably.

ONE COMMENT ON THIS POST To “Allotment of party ticket: Congress workers vandalise party office in Mandya”