Home » News » ‘Allow us to Live in Peace,’ plead Siddarthanagar Residents: Over 13 temples in one Layout ! 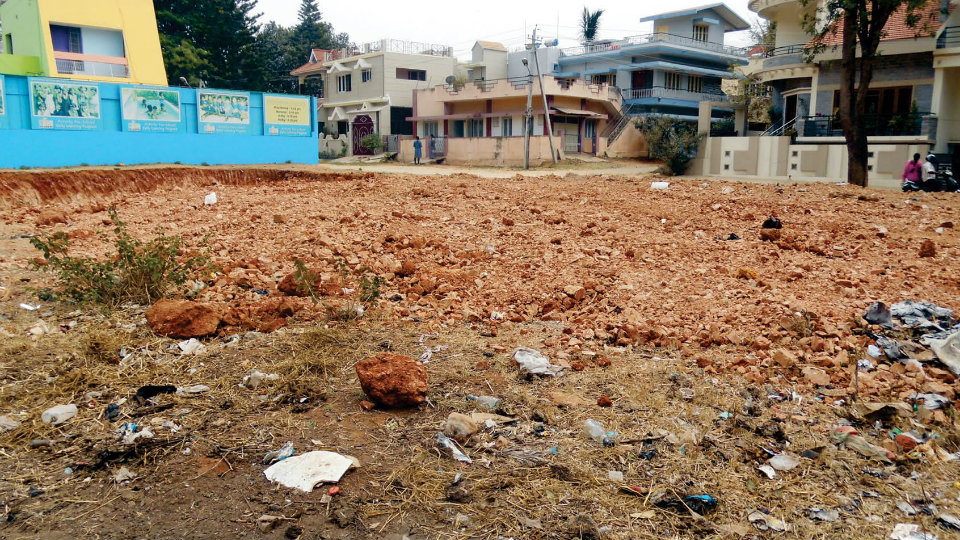 ‘Allow us to Live in Peace,’ plead Siddarthanagar Residents: Over 13 temples in one Layout !

The  local residents, who noticed large scale digging works taken up at Site No. 105 on Sanmarga about a week ago, questioned the workers on the structure that was coming up at the site illegally.

After learning that the excavation works was being carried out for the construction of a Jain temple and that the MCC had not given any permission, the local residents complained to the MCC authorities and sought an immediate stay on the ongoing works.

Following the complaint, the MCC authorities arrived at the spot and stayed the works.

Siddarthanagar, which comes under MCC Ward Nos. 63 and 64, is dotted with many temples:

The Vinaya Marga in Siddarthanagar alone has three temples — 8) Siddivinayaka Temple, 9) Sri Rama Man dira and as well as a 10) Jain temple. Apart from this Jain temple, there is another 11) Jain Temple in a residential complex.

Also, there are a few other temples in the locality including 12) Manjunatheshwara Temple in front of the Milk Dairy on Bannur Road and 13) Shiva Temple in DFRL premises, according to local residents.

Site No. 105 was allotted by MUDA to a person long ago. The site remained vacant for many years. But last year, some people, who formed a Trust, purchased the site for a large sum.

The original allottee is said to have disposed off the site as the authorities stopped issuance of any records such as Khata Transfer in respect of all landed properties coming under Kurubarahalli Survey No. 4 about four years ago.

But some persons, taking advantage of the situation, have come forward to construct a Jain Temple at the site without obtaining permission from the MCC, which is mandatory.

The local residents, suspecting that the works were being executed in a hurried manner in the absence of MCC permission, reported the matter to  the MCC authorities, who rushed to the spot and stayed the works.

MCC Commissioner G. Jagadeesha said that construction of temple in a residential site was gross violation of rules. The site must be used only for the purpose it was allotted.

As he was unaware of the Jain Temple being constructed at the residential site, he has asked the concerned Zonal Assistant Commissioner to submit a report. Necessary action will be taken based on the report, he added.

Meanwhile, the jurisdictional MCC Zone 3 Assistant Commissioner Puttaseshagiri said that following complaints from local residents, the MCC stopped the  excavation works at Site No. 105 and the construction materials at the spot have been seized.

The site owners have been directed to submit all records pertaining to the ownership of the site and the MCC is looking at how the Sub-Registrar registered the site that comes under Kurubarahalli Survey No. 4.

The local residents said that the construction of a temple in residential area will disturb peace in the vicinity as bhajans and other rituals will be carried out relentlessly from morning till night in Jain Temples.

Also, there are many educational institutions including Vyshali Convent, Mahaveer Jain Vidyalaya, Teresian Convent as well as MRC Eye Hospital in the vicinity.

In this backdrop, a memorandum has been submitted to  Chief Minister Siddharamaiah, MP Pratap Simha, Mayor M.J. Ravikumar, MUDA Commissioner Dr. M. Mahesh and MCC Commissioner G. Jagadeesha urging them not to allow construction of Jain Temple at the Site, the local residents said.