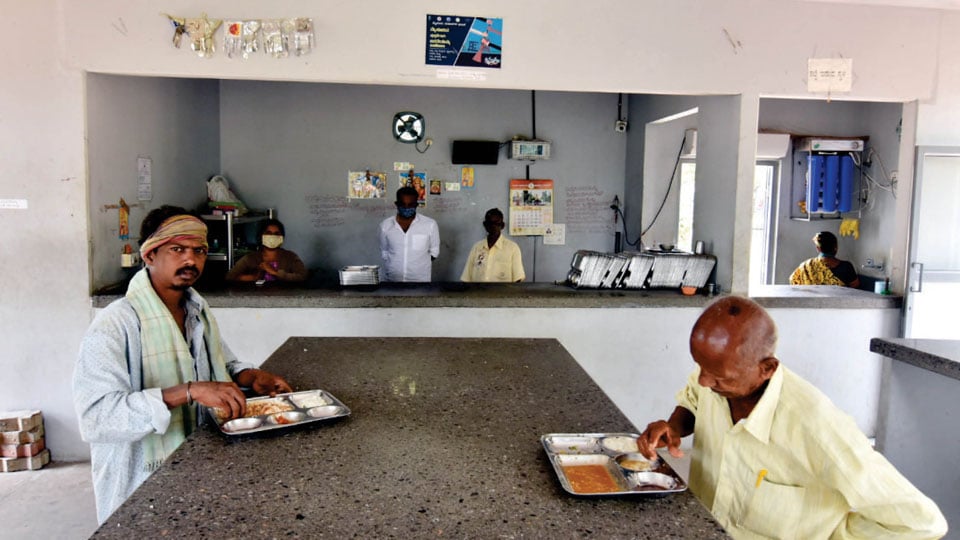 Mysore/Mysuru: Taking city traders by surprise, the Police yesterday morning went on a drive shutting down several shops and commercial establishments not dealing with essential services like food, medicine and fuel. Many shop-keepers described it as an “undeclared lockdown” that will remain in force till May 4 that they did not anticipate.

The State Government issued two sets of guidelines last Tuesday and Wednesday on COVID-19-related restrictions for the next two weeks. This led to confusion and merchants interpreted them as a complete lockdown during weekends and that they allowed non-essential services to function during the weekdays till 9 pm.

Following the latest order on Wednesday, the Mysuru Police enforced a virtual lockdown last morning, closing all shops not dealing with essential services, catching traders off guard. “This sudden policy change has caused a lot of chaos and we condemn the carelessness. This multiple orders will impact businesses that are already reeling under losses from the lockdown last year,” said C. Narayanagowda, President of Mysuru District Hotel Owners Association.

“The State Government has been issuing these types of confusing orders with a lot of ambiguities ever since the pandemic began. Instead of these ambivalent orders, let the Government announce a complete lockdown. Businesses have been already hit and there is no chance of revival,” he said speaking to reporters in city yesterday.

“Since the last 14 months there have been a lull in businesses and except for waiting for Government orders and revised orders and clarifications, we have no other job,” Narayanagowda said sarcastically.

“Meanwhile the Mysuru City Corporation is pressurising us to pay taxes despite having no business and are threatening us that they will close our business,” he added.

“Parcel services at hotels and restaurants do not fetch any income. The Government must permit 50 percent crowd with social distancing. Like Government employees who are paid for sitting at home, let the Government pay us money too. We too will sit at home in some peace. Let the Government refund at least half of the taxes that we have paid. Even our employees can live a relaxed life,” he said.

Meanwhile, the confusion in guidelines and the resultant chaos has led to some consternation in the Government. Chief Minister B.S. Yediyurappa was reportedly upset over the issue. “There was no clarity in the guidelines issued on Tuesday night, promoting an addendum being issued on Wednesday. But that also was not interpreted properly and communicated to either the media or the public, leading to this confusion on Thursday,” said a Government Officer.