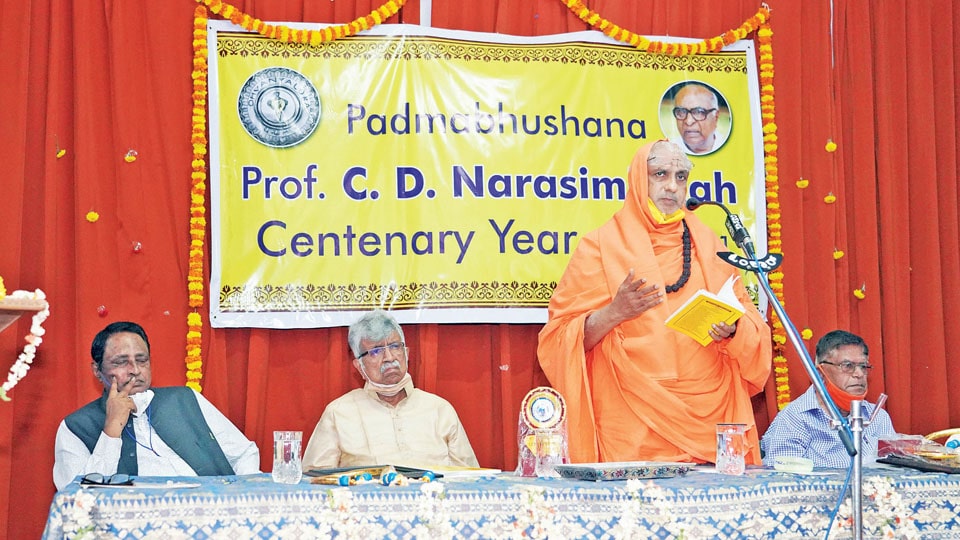 Mysore/Mysuru: The Annual Prof. CDN Memorial Day on April 12 at Dhvanyaloka, Bogadi Road, this year had an additional significance as it also coincided with Prof. C.D. Narasimhaiah’s birth centenary celebrations.

Touching tributes were paid to the life and achievements of a scholar-teacher who won international recognition in his own lifetime despite his extremely modest and humble beginnings.

After the unveiling of the plaque, dedicated to Prof. CDN on the premises of the Centre  founded by him in 1979, by Sri Shivarathri Deshikendra Swamiji of Suttur Mutt, the programme started with invocation.

Prof. C.N. Srinath, Director, Dhvanyaloka, welcomed and highlighted the various accomplishments of his late father Prof.CDN, a multi-faceted personality, during every stage of his illustrious career.

The recipients of Prof. CDN Memorial Award (carrying a citation, shawl and Rs.10,000 in cash) were Dr. C.N. Ramachandran and Dr. D.A. Shankar for the year 2020 and Padma Shri Pandit Rajeev Taranath for 2021, all former students of Prof. CDN who have excelled themselves in the field of Kannada and English Literatures and Music.

Pt. Taranath, who spoke, alluded to the “School of English Studies” that Prof. CDN founded, maintained and cherished in a remarkable way and also the Guru-Shishya tradition he fostered, with some personal examples.

Dr. Shankar drew the attention of the audience to the two important phases of his career tracing the Leavisian and the post-Leavisian period; the impact of the west and the finding of his own native roots.

Two volumes to come out on the occasion were The Literary Criterion, a Dhvanyaloka critical quarterly, presently in its 69th year and an illustrated Travelogue, Where the Eagle Soars by Ragini Ramachandra (Text) and S. Ramachandra (Photos), both released by the Swamiji.

Presiding over the function, he recalled some of Prof. CDN’s unique qualities with much appreciation and also complimented all the Awardees for their contributions in their respective fields. He concluded his thought-provoking address, wishing the Centenary Year Celebrations all success while also expressing the hope that the Dhvani of Dhvanyaloka might resonate for long.

Prof. Srinath thanked all the dignitaries and the audience for attending the event. Celebrating a saga of 100 years relating to the life of a visionary teacher amidst the inspiring presence of Suttur Seer and receiving his benediction was Dhvanyaloka’s good fortune, he noted.