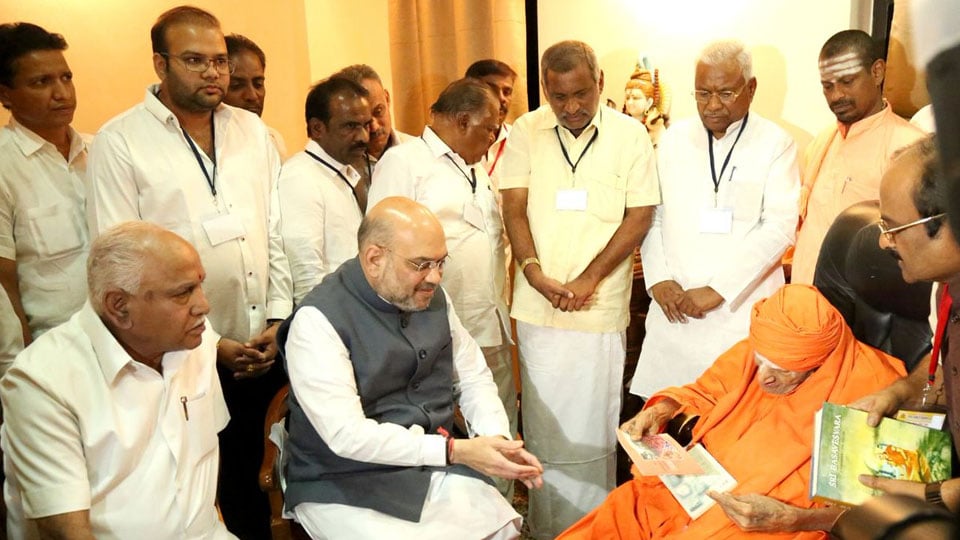 Amit Shah arrives in State on a two-day visit

Shah, who arrived at Tumakuru by a special flight, visit Siddaganga Mutt and sought the blessings of the 111-year-old Pontiff Dr. Sri Shivakumara Swamiji. He also presented three spiritual books to the centenarian Seer.

Earlier, on his arrival at Tumakuru, Shah was received by State BJP President B.S. Yeddyurappa, Union Minister H.N. Ananthkumar and a host of other party leaders.

The National BJP Chief later left for Tiptur, where he will address a rally of coconut growers.

Amit Shah will wind up his tour by addressing a State-level convention of Scheduled Tribes (STs) at Challakere in Chitradurga district tomorrow evening.

Shah, who will also undertake a tour of Mysuru region on Mar.30 and 31, will tour the districts of Mysuru, Mandya and Chamarajanagar — all Congress bastions — as part of his second leg of Karunada Jagruthi Yatra during which he will hold deliberations with Seers of various Mutts, trader community and with members of the public from all walks of life. The BJP Chief will stay in Mysuru during his two-day tour, it is learnt.