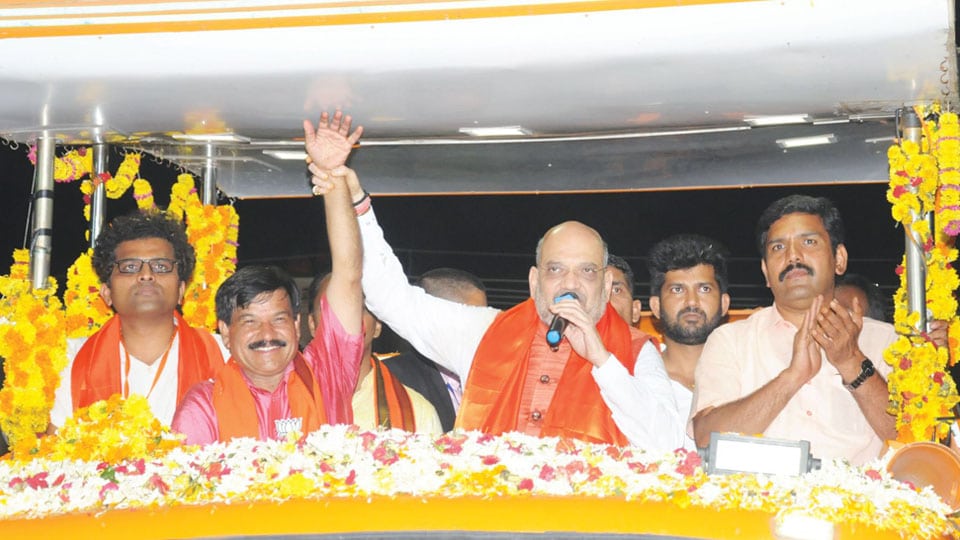 Beginning the day by campaigning Periyapatna in the morning where Party candidate S. Manjunath is contesting against K. Venkatesh of the Congress and Mahadev of JD(S), Shah later campaigned in T. Narsipur, where a few areas of Varuna Assembly segment come under T. Narsipur Taluk, for BJP Varuna candidate Thotadappa Basavaraju, who is locked in a battle with CM Siddharamaiah’s son Dr. Yathindra of the Congress.

He arrived in Mysuru City later in the afternoon and held road shows.

Shah’s road show started from Shivaji Road in N.R. Constituency, which is represented by Minister Tanveer Sait of the Congress.

Shah and other BJP leaders appealed the people to vote for party candidate Sandesh Swamy as the Congress leader appears in the Constituency only during elections.

Even through the segment is dominated by minority Communities, local BJP leaders had managed to bring hundreds of people, including Muslim women for the road show.

Shah standing from inside the party’s campaign vehicle, an orange mini-bus, began his rally from near Shantala Theatre. The rally passed through Siddappa Square, Nanjumalige Circle and Chamundipuram Circle, before culminating at Bhoothale pitch at Vidyaranyapuram, where he addressed a gathering.

Shah also released a manifesto, highlighting the party’s agenda for development of the Constituency in the next five years.

At Chamaraja, where former MUDA Chairman L. Nagendra is the party candidate, Shah’s rally commenced from the busy Ashoka Road. The rally after reaching Kote Anjaneyaswamy Temple at the Palace North Gate, criss-crossed through some of the main thoroughfares of Chamaraja Assembly segment.

Even as Shah was passing through the city thoroughfares, BJP workers and people perched atop the roofs of houses alongside the route, showered flowers on him. Shah too threw handful of marigold flowers at the bystanders.

At some points, slogans such as ‘Twinkle Twinkle Little Star, Amit Shah is a Super Star’ rent the air.

Shah’s road shows in the city received good response from the people.

The City Police had intensified  security and had blocked all the roads leading to Masjid-e-Azam on Ashoka Road, where the road show passed.

A large number of Police personal were deployed at the spot to maintain Law and Order.