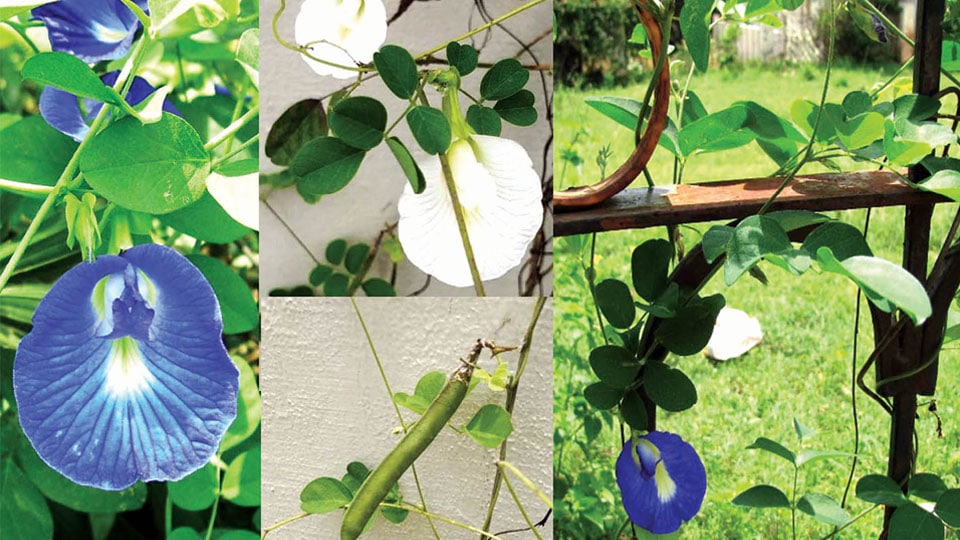 The scientific name is Clitoria ternatea of Fabaceae family. The genus name “Clitoria”, from the Latin name “Clitoris” is due to its petals resembling human female genitals (yoni). It is native to Africa & South East Asia and widely cultivated in India, South America and Australia.

Clitoria ternatea is a vigorous, trailing, scrambling or climbing vine with a strong woody rootstock. Stems are sparsely hairy,  sub-erect and produce slender new stems from the woody base each year. The leaves are compound with 5-7 leaflets, elliptical, 3-5 cm long. The flowers are solitary or paired, blue or white, about 1 to  1.5 inches with  bract and bracteole (leafy structures on the stalk subtending the petiole); petals varying in colour (vivid deep / cobalt blue or light blue with a white throat or pure white), standard large, emarginated, wings oblong, keel incurved with a yellow to white pattern in the centre of the lower petal. Stamens 10 ( 9 fused to form a tube+ 1 free) . Ovary elongated, densely clothed in white hairs. Fruits are flat, linear, sparsely pubescent pods dehiscing violently at maturity throwing  8-10 dark shiny seeds.

There are many ecotypes, agro-types and cultivars with variations in flowers and leaflets.

A blue coloured tea full of potent antioxidants is made from the flowers. It is supposed to fight against glycation (protein damage caused by an influx of sugar molecules) and help protect the skin against premature aging.

How to make: Collect a few fresh flowers and put them in a container and add hot water. Shake well and filter the decoction. Blue tea is ready. Cool and add a little lemon juice (optional). Watch the magic, a change from bluish to purple ! Depending on the proportion of lemon juice, colour changes to various shades of blue and purple. Dried lemongrass can also be used along with flowers.

Known as ‘Bunga telang’  in Malay the flowers / buds are used as a  natural food colouring agent to provide bluish tint to the rice dishes (kuih ketan, nyonya chang and nasi kerabu) in  Peranakan / Nyonya cooking.   The young pods are edible and used as vegetable in Philippines. Blue tea called  ‘Butterfly Pea Flower tea’ (similar to green tea) is prepared from the flowers. In Burmese and Thai cuisines, the flowers are also dipped in batter and fried (like pakodas). The flowers have more recently been used in a colour-changing gin known as Sharish Blue Magic: Blue gin in the bottle turning pink (shimmering blue colour or bluish pink) generated by an infusion of the flower when mixed with a carbonated water due to change in pH.

It is a multi-utilitarian plant used for food, medicine, dye and animal feed besides ornamentation.  However, it is mostly grown as a medicinal herb  / ornamental climber in India.

A  native medicinal herb, its root, bark, leaves and seeds are used in ayurvedic preparations. The herb is in use for centuries as a memory enhancer prescribed for children suffering from developmental problems of brain and impaired cognitive function. The plant contains wide range of secondary metabolites like triterpenoids, flavonol glycosides, anthocyanins, steroids and used to treat vata vitiated disorders besides panchakarma treatments for balancing doshas in the body to bring about internal as well as external detoxification. The root is also used for leucoderma.

It is grown for its high-quality, protein-rich legume called  “tropical alfalfa” in tropical and subtropical regions of the world.