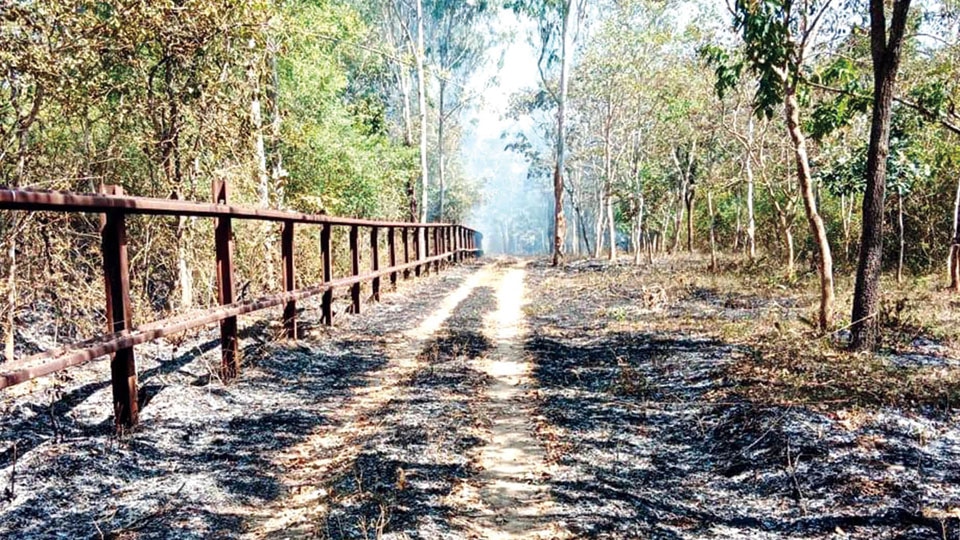 Hunsur: Diligently following the age-old and trusted system of creating fire lines (creating a bald patch of land between green swathes) to prevent summer forest fires, the Karnataka Forest Department this year has moved a step ahead and has adopted technology for the same task.

Relying on technology, it has come up with an app to keep forest fires in check and this year it has been implemented in the Nagarahole Tiger Reserve.

What prompted the Forest Department to go in for technology is the devastating fire at Bandipur Tiger Reserve in February 2019 where more than 15,400 acres of forests were burnt.

Following the devastating fire, a need was felt to adopt technology. The fire alert app that has been operationalised by the Forest Department at Nagarahole has been developed along with the Karnataka State Remote Sensing Application Centre (KSRSAC). This is for the first time such an app is being used and the Department Officers have pinned high hopes on its efficiency.

The biggest advantage is the time saved between the detection of fire and the alert received. The new app is an improvisation over the Forest Survey of India (FSI) fire alert system that was implemented in 2004. It is based on inputs from two collaborative arrangements — National Aeronautics and Space Administration-Indian Space Research Organisation (NASA-ISRO) and ISRO-FSI.

When a fire breaks out inside forests, the sensors that are placed strategically inside the woods transmit the alerts to the earth station of the National Remote Sensing Centre. The hotspots are then transmitted to the FSI electronically, which processes them, generates alerts and disseminates them to registered end users.

While the FSI alert takes around four hours between detection and alert, the app developed with KSRSAC can save about 30 minutes to 90 minutes as alerts are sent between two-and-a-half hours and three hours of detection. This app can clearly indicate the location of the fire  and accordingly, relief can be rushed.

Another feature of this KSRSAC app is that the end-user can transmit the fire in case it is spotted by a watcher or a forest guard. The ground-level staff can relay the information of the fire to the headquarters through the app so that the other personnel of various beats are alerted automatically. This way, the fire can be extinguished before it spreads to other areas.

The KSRSAC app can also indicate the temperature, humidity, wind speed and wind direction in the fire area, which will help the ground-level staff know how to approach the fire and from which direction.

App can detect encroachments too

The app can also check modification in land use as the Department has digitised all their land records and has compared that with the Revenue Department records for verification. Now, 80 percent of the data has been digitised and any change in land use can easily be detected.

Earlier, land use surveys used to be done while patrolling on foot. Now armed with digital data, these surveys can be conducted with the help of satellite images and algorithms. Any kind of encroachment, chopping of trees or drying up of water bodies can be detected.

This time, the authorities at Nagarahole have directed the field staff to prepare 9,200 kilometres of fire line in all the zones of the Tiger Reserve — Hunsur, D.B. Kuppe, Nagarahole, Veeranahosahalli, Anechowkur, Kallahalla, Metikuppe and Antharasanthe. Usually, in the 843 sq.km of the National Park, fire lines would be made in 2,536 km but this year, 9,200 km fire lines have been created.

Over 400 watchers have been deputed for summer duty to guard the forests from the infernos and they will keep an eye on the forests from 31 watch towers 24×7. Apart from the human vigil, drones with thermal sensors will be used as additional fire detection methods both during day time and after dark.