Home » Feature Articles » Arcadiadalli Puck: A musical journey, enticing one and all! 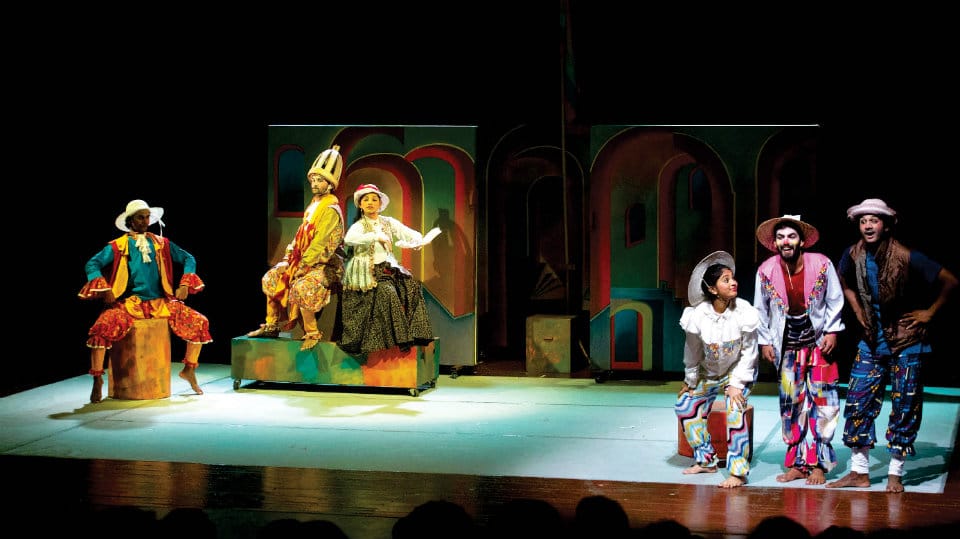 Arcadiadalli Puck: A musical journey, enticing one and all!

The play was staged by Rangayana Touring Unit, Mysuru, at Bhoomigeeta in Rangayana premises on Oct.6 as part of Navaratri Rangotsava.

All the world’s a stage” said Shakespeare in ‘As You Like It,’ which was rightly adapted by the team, in their play ‘Arcadiadalli Puck.’ The actors on stage were successful in engrossing the actors off stage — the audience — into their play very well.

Chandradasan, the director of this play, has beautifully crafted many sequences where the audience feel one among the actors, through their interaction and occupancy of performing space. This enables each one of the audiences to be enthralled in the entire plot alongside being able to connect to the varying emotions of all the characters on stage.

The play is a musical treat, captivating us all into a journey of innocent laughter with contemporary background music. The strength and the highlight of the entire play is the marvellously knit script, by Ramnath.

An essence of Philip Sidney’s ‘The Countess of Pembroke’s Arcadia’ is the line of interest for the entire script. Philip Sidney, having celebrated for his works, during the Elizabethan era — only next to Shakespeare —  is acclaimed for his pastoral romance and an intricate love story embodying the ideals of a medieval chivalry.

Although ‘The Countess of Pembroke’s Arcadia’ has never been greatly popular on stage, the experimental writing by Ramnath based on a mild synopsis of the big fat fictional work, creates a sensation in the audience with its treatment of sex, politics, importance of oration, humour and dark-humour and cross-dressing.

Narrating in a sprawling meta-theatre form, usage of the most sensitive symbols in the current scenario, with utmost subtlety, satisfies the hunger of both theatre lovers and as well as the common crowd.

Speaking of the most sensitive concerns of the LGBTQ in the climax, where two female characters marry with rainbows flaunting everywhere on the stage is a treat and respect paid to the whole community. Sex being a taboo and a delusion in our society, not many works are embracing the fact that sex is nothing but a necessity like air, food and water, the essentials of our on-going lives.

The topic of sex has always been over-hyped amongst us, the commoners. ‘Arcadiadalli Puck’  speaks of sex as something that revolves in our minds, in two forms — for pleasure alone and for a moral inclination included in sex.

The most overwhelming part of staging this, is to see the unvoiced acceptance through the hugest of applauses from the audiences.  Opening scene of the play starts with a beautiful collision of all the colours, precisely the rainbow colours being spread as the flag to commemorate all sorts of emotions in a play, which was used as a denotation of genre of the plays performed, during Shakespearean times.

As already mentioned, the climax of the play yet again accepts and celebrates lesbianism, intersecting the age-old plot into the most contemporary concern in the society. The interesting part is, the beginning and the ending of the play is done with the representation of LGBTQ with their colourful flags.

Apart from talking about these intricate themes, the play also discusses the nuances of a ‘democratic’ nation, a note with regard to the suppression of speech and ideas of the voiced and voiceless. Another powerful concern spoken about is the importance of oration in the context and pretext of today’s politics.

To speak of another feather on the cap, the narration and songs are one of the best parts of the entire play. The five narrators who play a multiple role — narrators, singers, dancers, comic relief — keep the audience informed of what has happened, in brief and of what is going to happen in a play that they are staging for us all. These narrators were the bridge in creating a sub-plot, to introduce and support the characters of the main plot and also to give a swift comparison between Shakespearean and Indian Theatre.

Overall, it was a play power-packed with an avid performance from the young actors who are also the lights of the future in Kannada Theatre. The simple and colloquial language, contemporary and jazzy music, inclusion of audiences at their oneness, parallel narration, the major problem of the play (father’s helplessness and desperation to get his daughters married), humour and dark humour in the most sensible manner and the beautiful setting makes the play a worthwhile and a must watch for all the theatre lovers for an amazing experience of a contemporary play with societal concerns, and a must watch for non-theatre lovers to start enjoying theatre.