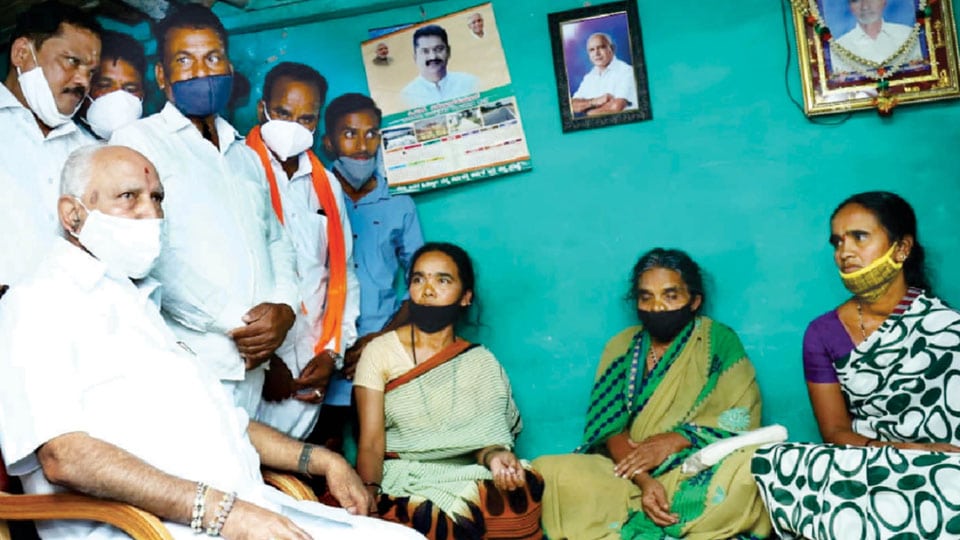 Gundlupet: Former CM B.S. Yediyurappa visited Bommalapura village in Gundlupet taluk of Chamarajanagar district yesterday where a BJP worker and an ardent fan had committed suicide following his resignation from the post of CM on July 26.

Ravi (35) committed suicide as he was upset over Yediyurappa’s resignation. On the same day, BSY had condoled Ravi’s death and had appealed to his supporters not to take extreme steps as ups and downs are quite common in politics.

Accompanied by his son and State BJP Vice-President B.Y. Vijayendra, BSY’s chopper landed at Devaraja Urs Sports Ground in Gundlupet town and MLA C.S. Niranjankumar received him.  Later BSY met Ravi’s mother, Devamma and his sister, and consoled them. He also handed over Rs.5 lakh cash to the family and promised another Rs. 5 lakh which must be deposited in a bank and the family could use interest amount.

Talking to reporters, BSY said he will visit every district every week after Gowri-Ganesha fest to strengthen BJP as his aim was to bring back the party to power by winning 130 to 135 seats.

The former CM ruled out meddling in the new Cabinet headed by Chief Minister Basavaraj Bommai and said it was left to the latter to decide. “Bommai is free and independent to pick his team members. None should doubt my intervention in governance,” he added.