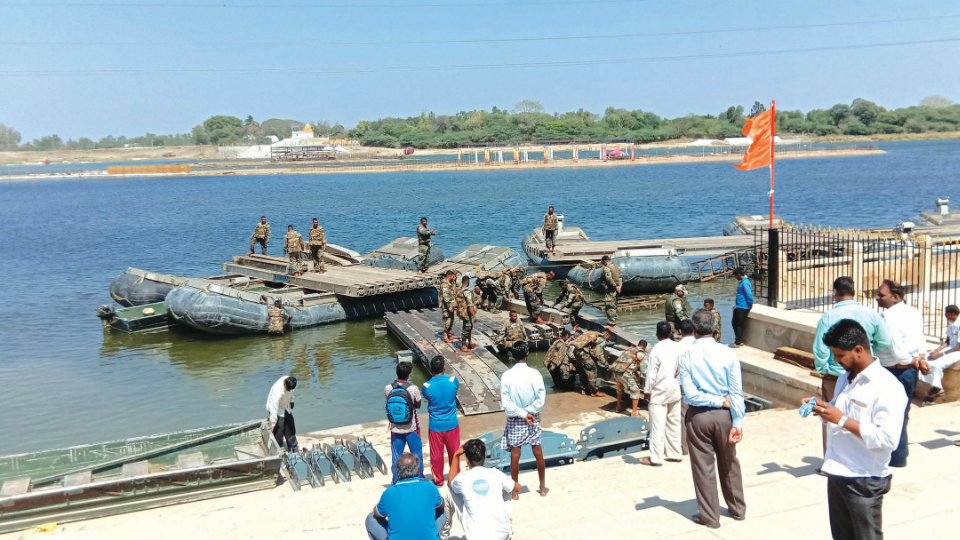 Triennial Kumbha Mela from Feb. 17 to 19

Mysuru: The 11th Edition of three-day Kumbha Mela will be held at Triveni Sangama, the confluence of  Cauvery, Kapila and Spatika rivers in T. Narasipura town of Mysuru district between Feb. 17 and 19.

Over two lakh devotees from across the State will take holy dip in the river which is considered auspicious. The District Administration has made elaborate security for the mega event. Apart from regular Police, commando forces are also deployed and have already started combing and surveillance operations.

Addressing a press conference in city on Wednesday, Sri Someshwaranatha Swamiji of Adichunchanagiri Mutt’s Mysuru branch said that over one lakh devotees took part in the 10th edition of the Mela three years back and a large number of people expected to visit this year.

Government and its agencies and various Mutts and religious institutions have made all preparations for the success of this event. Development works undertaken as part of the celebrations is in final stage and the government has built a lot of bathing ghats and separate sheds for women to change their clothes.

The Kumbha Mela at Triveni Sangama of T. Narasipur may serve the devotees of the entire South India in future, he added.

The government is making elaborate arrangements, including provision of drinking water, sanitation, roads, infrastructure and facilities in the town and around Triveni Sangama for the convenience of devotees. More than 100 expert swimmers and divers have been deployed as the festival is conducted amidst water.

Last time, Rs. 3 crore was spent by the District Administration to make the arrangements. But, it is yet to receive Rs. 2 crore from the State Government. This time, the expenses are expected to go up as the crowd is expected to cross 2 lakh.

The pathways to the islands amidst the water earmarked for ‘homa’ and for ‘dharma sabha’ are wider when compared to last time. A temporary floating bridge has been erected by the Army from Gunjanarasimhaswamy Temple linking Sabha Mantapa and Yaga Mantapa stage, the Seer said on behalf of Sri Nirmalanandanatha Swamiji of Adichunchanagiri and Sri Shivarathri Deshikendra Swamiji, who are also taking part in the Mela.