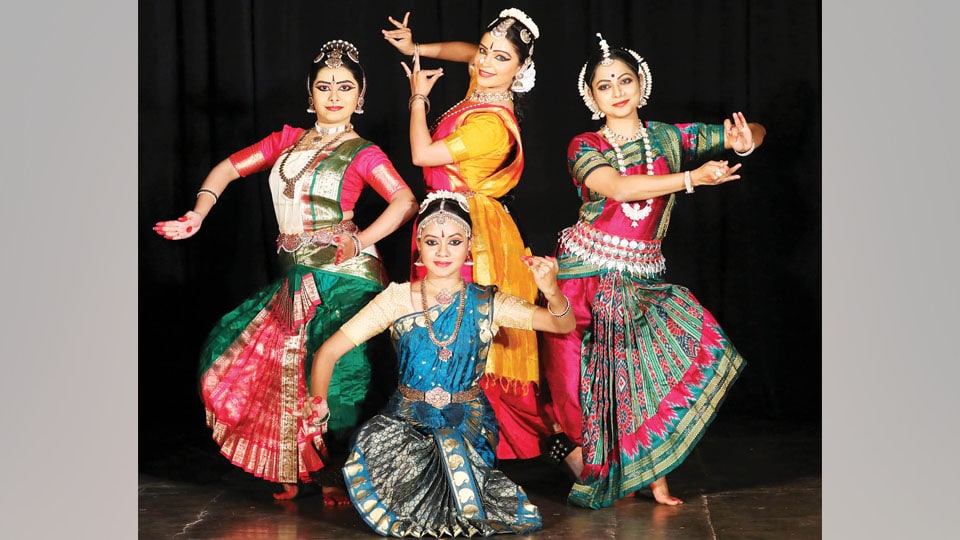 While the temperature was 34 in the corridors and was the same even with fans inside the Veene Seshanna Bhavana, Ganabharathi, Kuvempunagar, the lights shining bright on dancers on stage raised probably to 35, yet during the 34th edition of Articulate Festival curated by Mysore B. Nagaraj for Articulate Trust for Arts, the four classical dancers danced with élan despite sweltering heat.

This was on the 17th March, 2019. The audience too were elegant to sit through the nearly two-and-a-half hours of seamless series of concert that showcased three Bharatanatyam and one Odissi performances all in solo format. Two artistes were from Bengaluru, one from Nagpur and another from Bangladesh.

H.R. Archana commenced with a Gambeera Naatai, Adi Tala based Pushpanjali of  Sri Madurai Sethuraman and concluded with a Kannada Hari Dasa Sri Kanakadasa’s composition “Baroo Krishnaiah”, while she sandwiched an ode to Kamakshi through Sri Muthuwamy Deekshithar’s “Kanjadalayathakshi Kamakshi” In kamalamanohari Raga, Adi Tala. Her minimalism of aaharya was very befitting to the times and yet did not take away the aesthetics of appearance of a classical dancer. She performed her Bharatanatyam with grace and classic dignity bringing out the flavours of the composition that meandered from technical per-functionary to Bhakthi.

Pooja Anil Hirwade, a danseuse from Nagpur, chose a Daru Varnam to fit in the time allotted to her to present Bharatanatyam. The Sanskrit-based, Kamaj raga-Adi tala composition of Sri Muthaiah Bhagavatar was very well structured along with the required jathis that connected the different stanzas. The energy that was seen at the beginning was maintained until the concluding step and that made her technical dance part very crisp and geometrical and at the same time her translation of sahithya with appropriate gestures and movements made the whole presentation wonderful.

She had experimented by adding select verses from Soundarya Lahiri at appropriate juncture of the charana to bring out the essence more forceful.

Reshmi Divakaran presented her artistry through two compositions, one technical “Pallavi” the other poetry to which she did Abhinaya. As though not suffice that Odissi is already so lyrical and sensual, Reshmi’s stage presence added to the sublime feel of a classic form. The Janasanmohini Raga — Ektaali based Pallavi, true to the meaning grew like a fresh creeper, undulating and swaying to the breeze of melody to the beats of the heart. Sometimes sublime,  sometime erotic but many a time pure aesthetic movements of Reshmi made the presentation so enchanting to watch. She bewitched the audience in the Oriya song written by the poet Banamali Das where the bashful Radha expresses her embarrassment to her friend. The situation were the dark Lord disguised as a dark damsel who approached Radha offering to paint red her feet while she obliged by being scantily dressed for this ritual, finding who the girl in disguise was, was so awkward and thwarting.

Zuairiyah Mouli, a Bangla-speaking Bangladeshi, doing South Indian Classical Dance Bharathnatyam to the compositions in Sanskrit, Padam in Kannada and a Bhajan in  Hindi was a bundle of inexhaustible energy. Her unleashing of the same through her dancing, be it in her first number which was a Keerthanam in raga neelambari and a composition of Sri Lingaraja Urs eulogising Goddess Kamakshi, or in her second presentation of a Shiva Padam written by Sri Gurumurthy or in her final number of the evening a Surdas Bhajan in Hamsadhwani, was just jaw dropping.

Audience were mesmerised by the execution of Shiva Padam with its dynamic postures and rythamic and complicated moves across the space. Her physical proportion of being short did not hinder in any way in her showcasing of her dancing talent.

With three of the artistes selecting Goddess Kamakshi to offer their Nrutyanjali that evening, it seemed a celebration of that deity on that day, the auspicious Sunday. It was in all cool performances in hot weather.