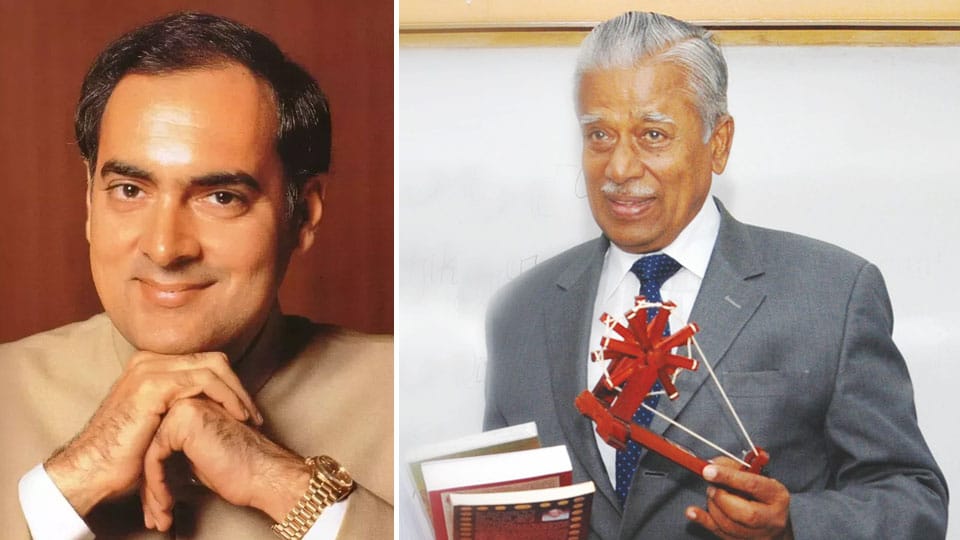 The job of the Police usually draws more brickbats than bouquets. Their position is always damned if you do and damned if you don’t. This is truer especially in today’s charged political atmosphere. But there are a few upright officers who irrespective of the pressures and pulls always manage to hold their own and to this league belongs Dr. Devarayapuram Ramasamy Kaarthikeyan, who as the head of the Special Investigation Team (SIT) cracked the late Prime Minister Rajiv Gandhi’s assassination case.

Star of Mysore Features Editor N. Niranjan Nikam caught up with the Super Sleuth Kaarthikeyan, 78, at the JSS Medical College Guest House, where the septuagenarian shared his experience of  tracking down Rajiv Gandhi’s killers, his role as CBI Director, his stint in NHRC, his views about scams and scandals in the country. He also revealed that he does not celebrate his birthday but the whole world celebrates it on Oct.2. Excerpts…

Star of Mysore (SOM): Even after 20 years of cracking the late Prime Minister Rajiv Gandhi’s assassination case, as the chief of the Special Investigation Team and Director of CBI, the moment your name is heard, we go back to that one big case. How do you look at it after two decades?

Dr. Kaarthikeyan: I have done my duty to the best of my ability. People thought it will never be detected. They said it will remain like Kennedy assassination, a mystery forever. That was what I was told when I took up the investigation on 22nd May, 1991.

They themselves told that unlike the investigation of Mahatma Gandhi and Indira Gandhi assassinations where the killers were caught red-handed, the investigation was to pursue the matter further as to who all were involved and why they did it. But in this case the government said that they had no idea at all and even the Intelligence agencies had no clue. You may never able to find who killed Rajiv; the government wants us to still go ahead, do our best and hence we are requesting you to head the team.

They said it is the call of duty and I agreed to do my best. I told them at that time itself, I will not allow any third degree method and I will not allow any politics. I will go from crime to the criminal based on evidence. They agreed. I went to Madras in a special fight from Hyderabad. My CBI officers based in Madras and the Tamil Nadu Police Officers who came to see me, said, “Sir, why did you come, there is nothing in this case. There were 17 dead bodies, Rajiv Gandhi’s face was not recognisable. His body was recognised by the Lotto shoes he was wearing and there was the head of a woman, far away from her two legs and one hand. So why did you take it up, it is impossible to detect the case.”

In three weeks’ time we could establish that it was LTTE. My colleagues in CBI who refused to take up the investigation said they (LTTE) have killed the President, Ministers and a number of people, now you and your family will become the target. So withdraw from the case. That is not what my colleagues said but the CBI said.

I said it is the call of duty, a national service and whatever is the risk involved I will continue with the task and find out who did it. The investigation went on and on 20 hours a day, seven days a week, there was lot of stress and strain on me. Ultimately we succeeded and charge-sheeted the accused.

SOM: How much time did you take?

Dr. Kaarthikeyan: In three months we detected the crime but we had to collect all the documents. We had to get scientific reports, had to see 1,00,000 photographs, 500 video cassettes and a few thousand books and all of them had to be scrutinised. Video means each of them takes three hours to watch and I put up a team and they were only watching TV. Finally they selected two or three cassettes for personal viewing. Out of 1,00,000 photographs only 10 photographs were found to be useful for investigation and for producing in the court. And about material objects like knife, gold biscuits, false eye — all of them had to be sent to the laboratory and every seizure had to be done in the presence of witnesses, as everything has to be proved in a Court of Law.

It took about eleven months as all the reports had to come and we finally filed the charge sheet within one year. Trial went on for three to four years. All the offences were established and most of them were sentenced to death. Then the matter went to Supreme Court. The three-Judge bench heard the appeal for three-long-months. Because normally they hear it for five to ten minutes and throw it away. But three Senior Judges heard it, they upheld my investigation but they said it cannot be treated as a case of terrorism. I did not agree with that but what to do. We filed a review petition but that also was rejected.

SOM: CBI is always in the news. But you have said that before you took up the job of tracking Rajiv assassins that the resource in CBI is minimal. Is this true even today?

Dr. Kaarthikeyan: No, after my investigation, I pointed out the deficiencies and now they have ten times more, why ten, 100 times more manpower, equipment, lot of vehicles, computers. After that the government also decided to equip the agency well. At that time I told the government that CBI name is big and I also want the CRPF to be with me for more manpower and vehicles. So I continued to be IG, CRPF, Southern Zone, Joint Director, CBI, SIT and then I got promoted as Additional Director General, CRPF, became Additional Director, CBI, then Special Director General, CRPF and then Director, CBI.