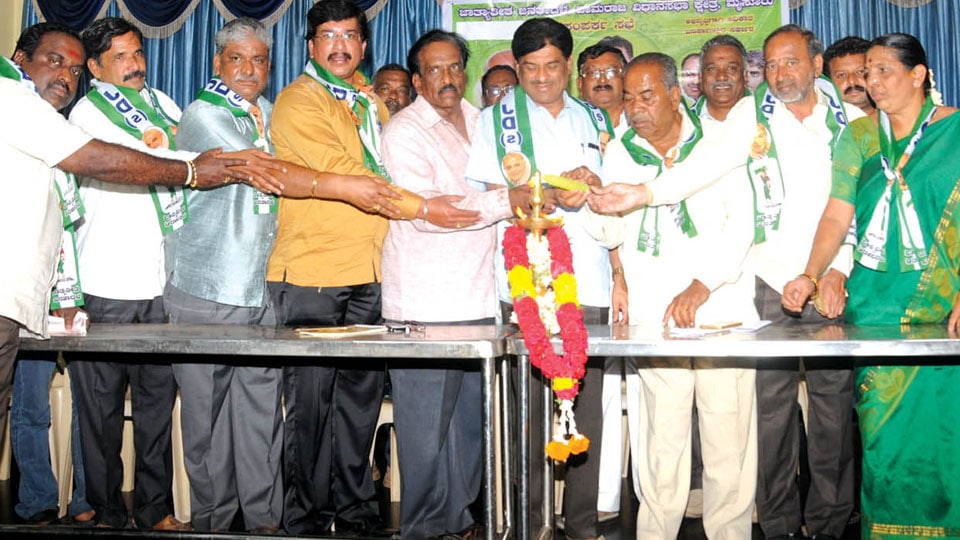 Prof. Rangappa appeals voters to elect him to make Chamaraja Constituency a model

Mysuru:  Claiming that he has many plans to make Chamaraja Constituency a model Assembly segment, former VC and JD(S) candidate Prof.K.S. Rangappa has appealed the voters to elect him and thus make H.D. Kumaraswamy as the CM in order to fulfil their dreams of good governance.

Speaking at a public contact programme at Brahmasthana Kalyana Mantap at T.K. Layout here yesterday, he said that the people should give a chance to the JD(S) as they are upset with the Congress and BJP regimes.

Maintaining that the Congress and the BJP had done little for the State, Prof. Rangappa recalled the 20 month governance of H.D. Kumaraswamy during which several welfare schemes were successfully implemented.

Noting that the JD(S) has promised monthly pension of Rs. 5,000 to persons over 70 years of age if voted to power in the forthcoming Assembly polls, he stressed on the need to elect a regional party to power as it has many advantages.

JD(S) City President K.T. Cheluvegowda said the JD(S)-BSP combination was getting tremendous response from all sections of the society and expressed confidence that JD(S) would bag a majority of seats in Mysuru district. Former Mayors R. Lingappa and M.J. Ravikumar, Corporators Shailendra, Shivanna and Ramani, BSP leader Siddaraju and a host of other local leaders were present.