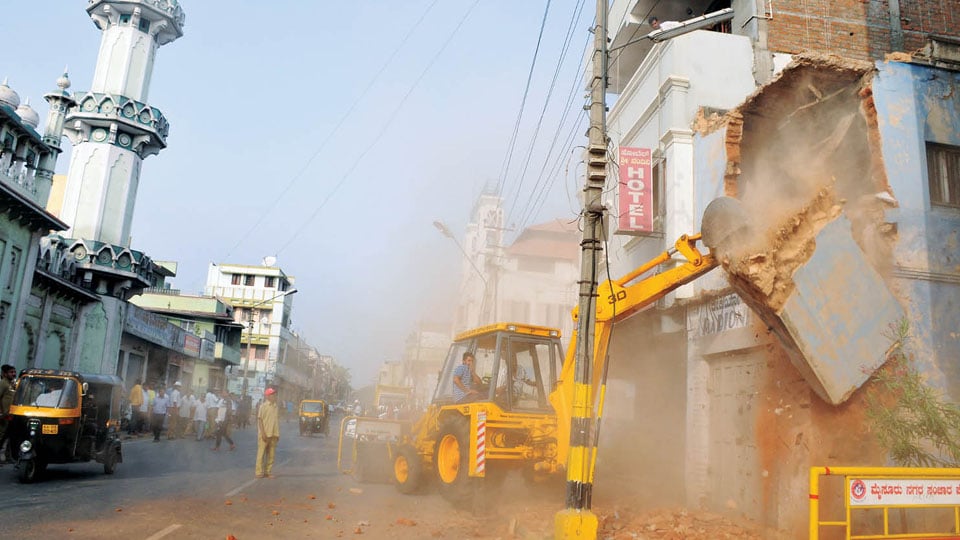 Mysuru: At last, the dust seems to have settled down on the much-delayed widening of Irwin Road in the heart of the city with District Minister G.T. Devegowda (GTD) performing guddali puja for the works this morning. To start with, some portions of two structures on a stretch of Irwin Road were demolished by the Mysuru City Corporation (MCC) authorities by using two JCBs in the presence of NR Police.

The MCC has planned to demolish 85 properties on either side of the narrow road, totally measuring 25,823.94 sq. ft.

The MCC first razed down a  portion of Shahnawaz building and an adjacent hotel building on the stretch near Nehru Circle.

Senior MCC officials, who supervised the operation, told Star of Mysore that the compensation had already been paid to the owners of these buildings and there was no hurdle to take up the demolition and widening works.

They said that the MCC had directly taken possession of 25,823.94 sq.ft. land from the owners of 85 buildings after offering a price of Rs.13,072 per sq. ft of land, costing nearly Rs.33.75 crore. The City Corporation had entered into an agreement with all these owners and taken their consent for demolition of the structures.

The MCC had entrusted the task of taking possession of these properties to MCC Zone-6 Assistant Commissioner Veena. 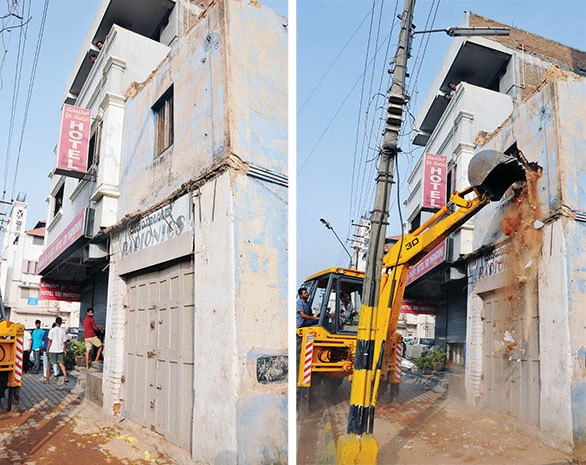 One of the buildings, close to Nehru Circle, being demolished this morning for widening of Irwin Road.

As on today, the MCC has registered three properties and started demolition works for road widening. It will demolish the remaining properties on the stretch as and when the registration process is completed. Another seven properties may get registered by tomorrow.

MCC will issue compensation cheques on the spot to property owners after completion of all registration process at the Office of Sub-Registrar, Mysuru South.

The MCC officials further said Rs.44 crore had been earmarked to widen this road including demolition charges, replacement of electric poles, construction of box drains, street lights, asphalting, other beautification works and compensation to 85 property owners. They said that all these developmental works will be completed by the end of April 2019, thus giving a new look to Irwin Road.

As per the plans and instructions from Deputy Commissioner Abhiram G. Sankar, Irwin Road is being widened into a 60 ft. Road (18 mts)  with a median on the stretch between Nehru Circle (Head Post Office Circle) and Government Ayurveda College & Hospital Circle, covering a distance of 0.85 km (850 mts). The road will be widened to 18 mts by demolishing some portions of the buildings from 10 to 30 feet on either side.

Though the road from Railway Station to Ayurveda College Circle and from Sub-Urban Bus Stand (Bengaluru-Nilgiri Road) to Nehru Circle were already widened by 18 mts and developed into a four-lane stretch, the MCC faced persistent demands from several quarters to widen the remaining portion of the narrow road which had been causing traffic snarls daily.

Now with the MCC taking up the widening works, the motorists can heave a sigh of relief.

Speaking to reporters, G.T. Devegowda said that development of Irwin Road was one of the long-pending demands of the people as the road was too congested and causing inconvenience to motorists and pedestrians.

The District Administration was also under pressure from various quarters of the society as the City Railway Station, Sub-Urban Bus Stand, Wellington House, Jama Masjid, Kalamma Temple, Yelakappachari Choultry, K.R. Hospital, Mysore Medical College, Cheluvamba Hospital, Central Post Office, State Bank of Mysore (India) Regional Office and the Central Police Station were in close proximity on the said stretch. Moreover, Irwin Road is located in the Central Business District, which has 12 link roads on one side and eight on the other, GTD said.

He said that all the building owners on either side of road including the management of  Anjaneyaswamy Temple, Central Library Building, Cauvery Emporium, Masjid authorities and shopkeepers had given their consent for development of the road and this will be completed within the deadline.

Going down memory lane, GTD said that he, along with former CM Siddharamaiah, once his close associate and others, often used to visit Irwin Road to have a cup of tea at a petty stall behind Bilal Hotel in early 1980s.

He said that they frequented this road as the Mysore-Chamarajanagar District Cooperative Central (MCDCC) Bank, from where the duo formally began their political journey, was located on the stretch.

They used to often have breakfast over political discussions and a wide range of other topics at Pavan Lodge located on the same Road, he reminisced.

2 COMMENTS ON THIS POST To “At last, dust settles on controversial Irwin Road Widening”