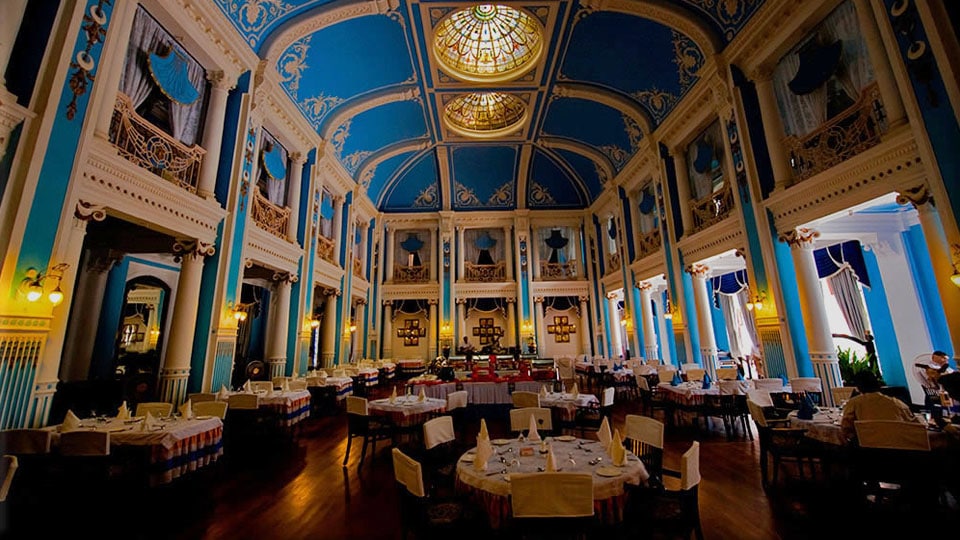 Au revoir, time to say goodbye to an era -2

The fame of Lalitha Mahal Palace Hotel started spreading so much that it became a matter of prestige to get a posting at this hotel! Ultimately in the nineties, I was brought back to this hotel as  General Manager, a matter of great pride for a Mysurean.

I have worked for nearly eight years as GM of this institution when it was at its height of glory. The GM’s Quarters, a five-bed room edifice with four poster beds,  antique sofas and Persian carpets, was an envy of many. This hotel has played host to Heads of States,  Bollywood and Hollywood actors, politicians, business tycoons and a host of other vvips. I have lost count of the number of films of all languages shot in this location. From last two years, this hotel has become a favourite location  for “Destination Weddings.”

I felt very happy acting as a guide on several occasions to point out to the visiting VIPs the salient features of this property. The marble staircase with hidden wiring, Belgium stained glasses, the lithographs with the history of Tipu’s war, the spring dancing floor, the list is endless. 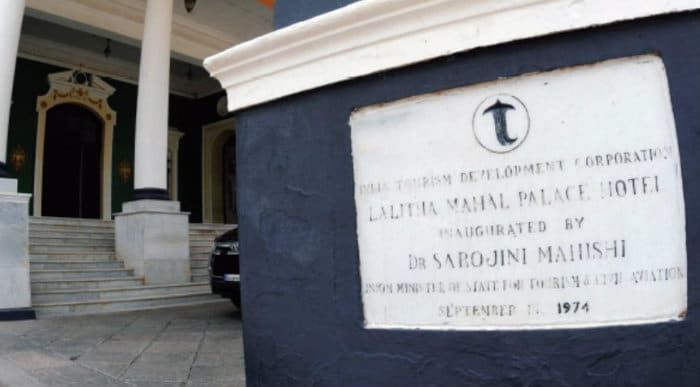 The marble plaque of ITDC at the entrance to the Hotel mentions that Lalitha Mahal Palace Hotel was inaugurated by Dr. Sarojini Mahishi, Union Minister of State for Tourism and Civil Aviation, on September 13, 1974.

Maintaining a heritage hotel is not an easy task since one never knew where the problem would show up. For those who have visited this property, you must have seen life-size paintings of two Maharajas just near the staircase. Some body had slashed the paintings and we decided to get the paintings repaired at the Regional Laboratory, Mysuru.  When we opened the sides of the frame to dismantle the paintings we were in for a shock. These paintings were in reality life-size black and white photographs painted with colour and not paintings on canvas as visualised!

A matter of great amusement for me was the fact that after my posting at Mysuru, I got two promotions and retired as Senior Vice-President of India Tourism Development Corporation (ITDC). But whenever I visited Mysuru and met any localites, I would be introduced as General Manager of the Palace. I tried correcting several of them but it was a futile exercise since for a Mysurean the ultimate posting was General Manager and all other posts were matter of no consequence. Even now, several years after retirement, my identity is of General Manager, Lalitha Mahal Palace Hotel.

The downfall of the hotel started the day the Sixth Pay Commission was announced. Rs. 45,000 for a gardener; Rs. 40,000 for a room attendant and a waiter. How can any hotel bear such a steep salary bill? The government had also decided that they should not be actively involved in any commercial business and decided to privatise. Slowly they started to down size and cut expenses on maintenance, which started to show on the building.

Mysureans are very proud of this hotel. If one arranges a party in this hotel and invite hundred people, all hundred with families would turn up! No absentees. Thanks to Kempaiah [a die-hard fan of this hotel], the Police Bhavan, the DC Office and now the Police Commissioner’s Office are all clones of this building!

My feelings are mixed. Sad that ITDC, the pioneer of tourism and travel industry, were leaving Mysuru but at the same time happy that in the hands of a private entrepreneur, this hotel can regain its lost glory and become an international hotel of repute. It is time that at least one hotel in Mysuru command a price of Rs. 12,000 and above as their basic tariff. An exclusive heritage hotel.

Jungle Lodges, a profit-making venture of the Department of Tourism, Karnataka, is taking over the property presently. A team was sent in advance to photograph each and every priceless item in the hotel and catalogue the inventory. An excellent job. The State government is paying to ITDC a token sum of Rs. 7.5 crore as goodwill. I am proud that ITDC is handing over the priceless antiques, furniture, carpets, lifts, chandeliers, lithographs, paintings, etc., a priceless heritage in excellent condition back to the State.

I have been given to understand that they want to go in for a global tender which may bring in some reputed international brands with deep pockets to Mysuru. I am looking forward to the day when this hotel will be talked in the same breath as Lake Palace Hotel, Udaipur or Umaid Bhawan, Jodhpur. 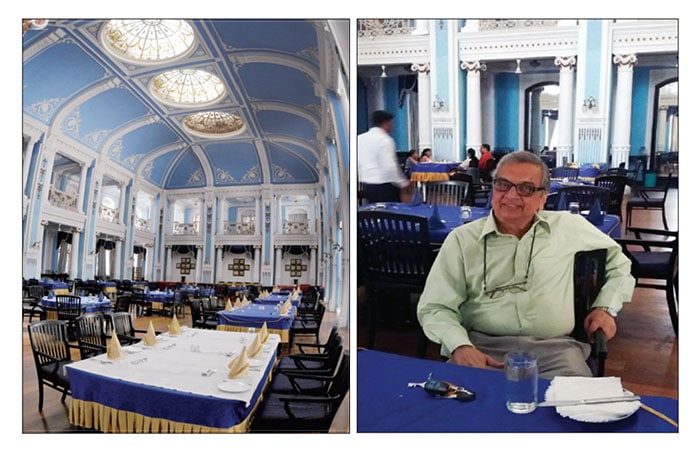 A word of caution. Several politicians with deep pockets too are eyeing this property and may succeed too if the tender conditions are watered down.

Several times jokingly, I refer to this hotel as my “atthe mane.” We are grateful for the love and affection the current General Manager Joseph, officers and staff show on us even after my retirement from service.

The final countdown has begun. With a heavy heart, tears flowing freely, time has come for me to say au revoir, goodbye to an era.