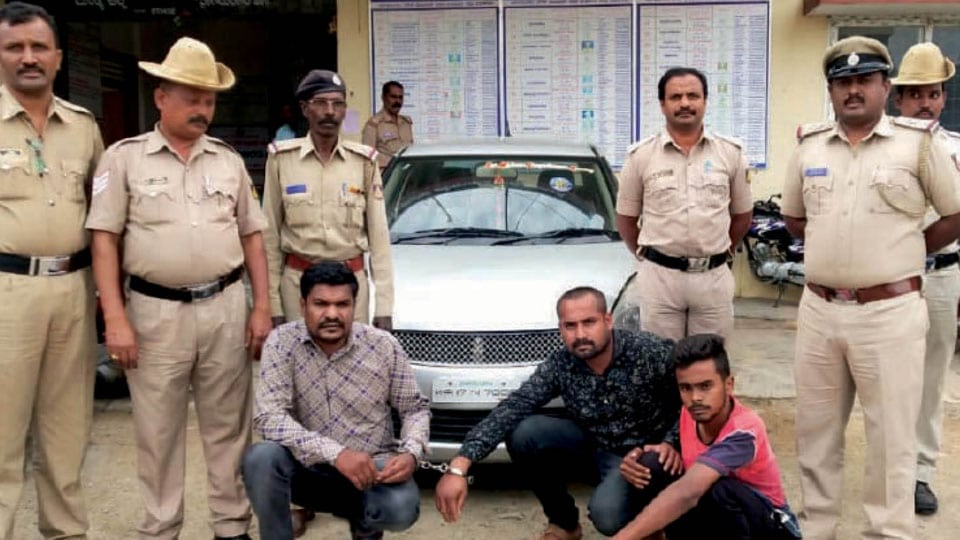 The arrested are rowdy-sheeter Shabareesh, Mahesh alias Bandli and Kaushik alias Chechi, all from Nagamangala. The Police have spread the dragnet to nab car driver Deepu alias Tiger and one more person.

On Nov.22 night, Mithun, son of Nagamangala TMC Member Thimmappa, who is working as an Assistant Auditor in Mysuru, was talking with his friends near the Mini Vidhana Soudha, when Shabareesh, Mahesh and Deepu, all known to Mithun, came in a car and took Mithun for dinner in their car to a restaurant on Bengaluru-Mysuru Highway. After having dinner, they took Mithun near Lakshmisagar in Pandavapura taluk at about 1 am and told Mithun to call his father and ask him to arrange Rs.30 lakh.

Mithun, who initially thought that they may be joking, realised that they were serious when Shabareesh held a razor on Mithun’s neck and threatened him to call his father.

Mithun then told the kidnappers to take him near Nagamangala and he would call his father from there, according to the complaint lodged by Mithun.

The kidnappers took him near Devalapura Handpost in Nagamangala the next day afternoon, where Mithun made a video call to his father and told him that he was kidnapped and asked him to arrange Rs.30 lakh for his release.