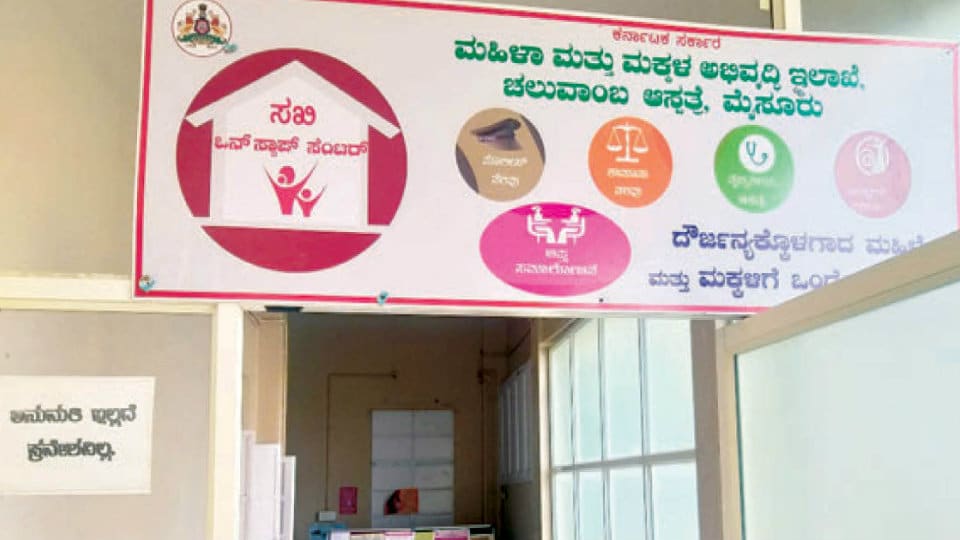 Mysuru: ‘Sakhi One Stop Centre,’ aimed at providing free medical treatment, legal aid, Police help and counselling to women victims who are subjected to sexual abuse and domestic violence, has started functioning at Cheluvamba Hospital in city since one month.

The centre is an upgraded version of Gelathi, a special treatment cell. The centre has started functioning from Nov. 2 at the second floor of the hospital and expert counsellors are always ready to extend help to victims. The centre also has Police personnel, advocates, doctors, nurses and D Group employees attached to it. Women and child victims will be given necessary medical treatment and legal assistance free of cost.

The Union Government in a bid to curb rising abuses against women and children, has started these centres at many places across the country. In Karnataka, there are seven Sakhi Centres, including the ones at Mysuru, Udupi, Chamarajanagar, Tumakuru, Chitradurga and Bagalkot. Women and child victims who come to the centre will be provided appropriate treatment and necessary assistance. The centre is open to women and girl children of all ages, who are victims of sexual abuse, be it in the workplace or anywhere else, domestic violence and disharmony, physical and mental abuse etc., women victims of crimes such as acid attack, human trafficking, modesty outrage, pushing to prostitution etc., can rush to the centre for all necessary help.  Also, minor girls and women will be sheltered by the centre.

The Women and Child Welfare Department has taken necessary steps for publicising the centre among the public.

One month after being set up, Sakhi centre has recorded Nine POCSO cases and one domestic violence case and the centre has provided all necessary help to the victims. The centre works 24×7. Helpline Nos- 181,1098, 0821-2423181/2543003. The victims  are extended a financial assistance of Rs.25,000 within 24 hours of registration of FIR. Also, in some cases, assistance up to Rs.2 lakh will be given to those in need.

The ‘Sakhi One Stop Centre’ committee is headed by the Deputy Commissioner, with the SP, DLSA Chairman and the Chief Medical Officer as Members.