Opposing the installation of an Ola cab booking kiosk in front of the City Railway Station, auto drivers, led by former Minister S.A. Ramdas, submitted a memorandum to Railway officials yesterday urging the latter to relocate the kiosk elsewhere.

The Ola kiosk installation work is almost completed and the cab service will begin soon. Allegations were heard that the scheme would badly affect the interests of auto drivers and in that context, Ramdas had held a meeting of auto drivers yesterday and a lot of opposition was heard regarding the installation of Ola booking kiosk. 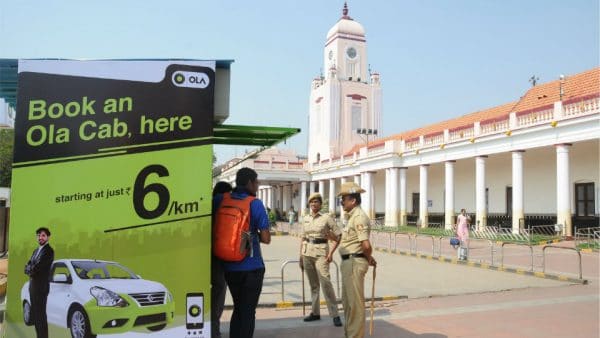 After hearing to auto drivers’ grievances, Ramdas held discussion with Railway Divisional Manager Atul Gupta and apprised the latter regarding the Ola cab service hitting the business of auto drivers.

Replying to that, Gupta said that bowing to growing demand of railway passengers to introduce the  service of a cab aggregator, Ola cab booking counters were opened at several Railway Stations and it was started late in city. He added that the permission of Transport Authority was not needed to open the kisok which has been done with  permission  from Department of Railways which would also get a good revenue from the deal.

Reacting to that, Ramdas appealed Gupta to shift the booking kiosk to platform – 1 and requested not to start their service till the issue was resolved. He also submitted a memorandum in that context to DC D. Randeep.