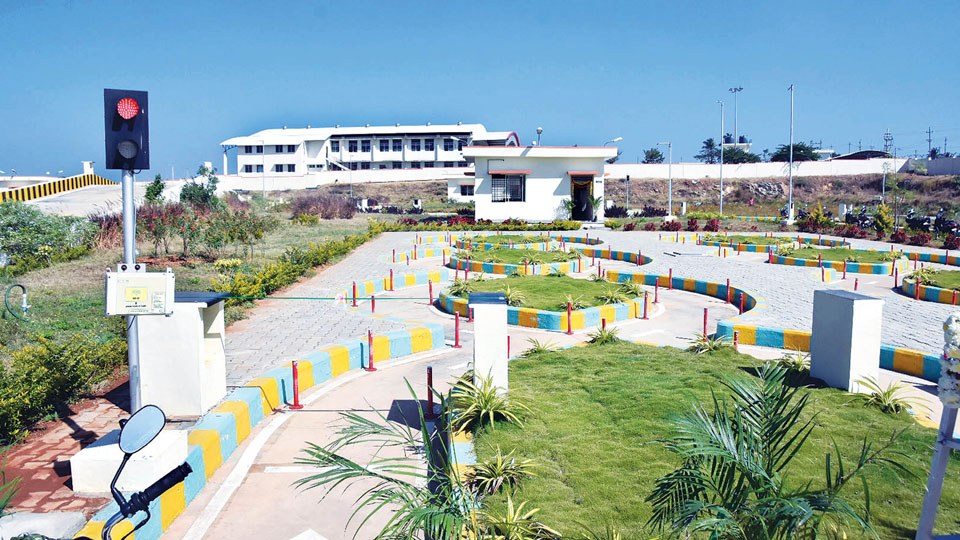 Mysore/ Mysuru: After a delay of more than five years since the preliminary works were initiated, the city’s first and State’s third Automated Vehicle Driving Test Track was inaugurated this morning at   Regional Transport Office (East) in city at Rajivnagar on the Outer Ring Road.

It is a fully-automated track where there is no manual intervention at any stage and Driving Licences are issued in an automated process. Only the postal communication with the licence applicants will be manual.

The track was inaugurated by Deputy Chief Minister Lakshman M. Savadi who holds the Transport portfolio.

The track is fully functional and will be operated from tomorrow. The track has been built at an eight-acre plot that was handed over by Mysuru Urban Development Authority (MUDA) and the track per-se was built at a cost of Rs. 5.6 crore. It is a joint venture of the Transport Department and the KSRTC. The track was conceptualised in 2015 when the need of an automated track was felt.

The track technology has been developed by Cascade Systems and Communications, Bengaluru and there are 17 employees from the company who will operate and maintain the system on a day-to-day basis.

Once a person applies for a Driving Licence online, he gets an SMS on the date of the driving test. At the RTO East, he is given a bar-coded card with an automated special identification number. He has to flash the card at the entry of the track and register his thumb impression at the designated slot for the automated system to open.

Prior to this, an automated test screen opens to the applicant where he has to answer three questions and clear the test before riding the vehicle inside the track. For the two-wheeler test, there are 58 poles placed on the sides and at frequent intervals. A candidate is allowed to touch 6 poles and if the ninth pole falls, he is declared fail and has to re-apply for the licence.

Both two-wheeler and four- wheeler licence applicants have to undergo tests including Serpentine Track, Traffic Signal Test, Track Test, ‘8’ Track Test, Reverse ‘S’ test, Kerb Parking Test, 3-point Turn, UP Gradient and there are specific time duration for each test that ranges from 60 seconds to 9 minutes. Some feats have to be completed within 120 seconds and an applicant committing a small mistake or a miss-judgement is declared fail.

The tracks are designed in such a way that the manoeuvring skills of the driver are tested. Some of the tracks have been designed in ‘8’ shape to test the skills of negotiating a hairpin bend. Road humps have been laid and there are elevated tracks that resemble a steep gradient. At the gradients, drivers are asked to stop their vehicles at the middle and will be asked to proceed after some time. This is to test their ability to steer ahead in real-life situations.

Automated sensors and scanners have been installed at the sides of the track at vital points along with a series of CCTV cameras to monitor the driving. The sensors have alarms and it will beep if a driver faults while giving the test. Every move of the driver is scanned and recorded and one error leads to disqualification. On an average over 440 applicants for two-wheeler licence can be tested per day and over 200 four-wheeler applicants can be tested daily.

Additional Transport Commissioner C.P. Narayanaswamy said that the automated system will ensure transparency and  test the physical and mental strength, knack and presence of mind of the applicants. Decisions are taken on track, in a real-time situation and this endurance test will minimise road accidents, he added.