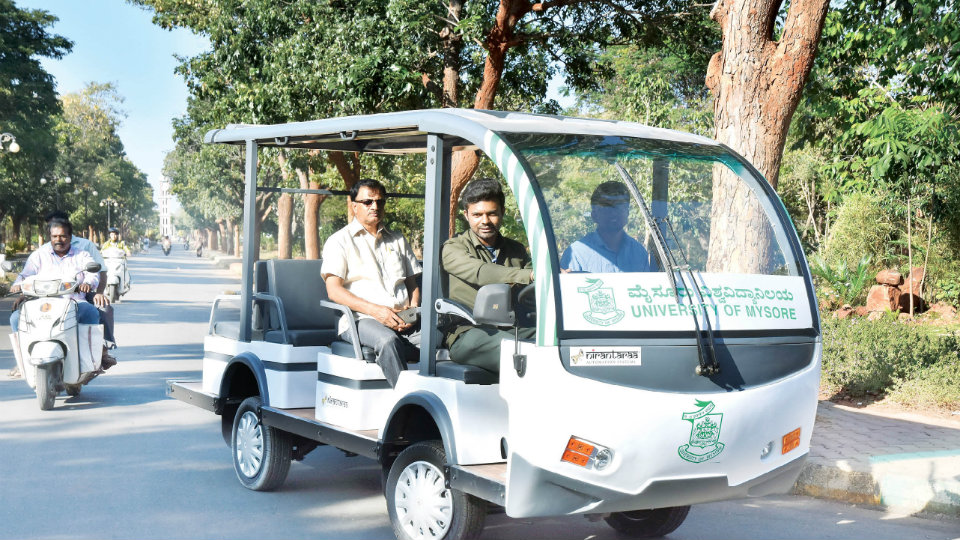 Free ride for seniors and physically challenged; Rs. 5 fare for other buggy users

Mysore/Mysuru: How about some e-cart vehicles or battery-operated buggies to go around the vast and green campus of Manasagangothri? The University of Mysore has procured two such vehicles to ferry people from point-to-point inside the campus. No University in the State has this facility and it is the first-of-its-kind.

The two vehicles, costing Rs. 8.5 lakh each, have been procured from Bengaluru and the trial runs have been completed. The buggies will be officially dedicated to the campus on Sunday (Jan. 26) at 8.45 am. The e-carts will be launched by Yaduveer Krishnadatta Chamaraja Wadiyar. University of Mysore (UoM) Vice-Chancellor Prof. G. Hemantha Kumar will preside.

The battery-operated carts have been purchased by the University to make the main campus ‘green’ premises by introducing an eco-friendly transport mode. While one vehicle will be stationed on Bogadi Road near Kuvempu Statue (South Gate), the other will be parked at West Gate near the gate in front of Sri Jayachamarajendra College of Engineering (SJCE).

Speaking to Star of Mysore from America this morning where he had gone to attend an official engagement, Prof. Hemantha Kumar said that the vehicles will ferry professors, parents of students, lecturers, public, students and scholars. A point-to-point charge of Rs. 5 has been fixed and if the journey is continued, Rs. 3 will be charged per person. Senior citizens and physically infirm persons and physically challenged individuals will get a free ride, he said.

Till Jan. 31, the buggy rides inside the campus will be free of cost and the fee will be levied from Feb. 1, the VC added. A private agency has been entrusted with the responsibility of handling and maintaining the vehicles and collecting revenue. Drivers will be appointed by the agency and daily revenue will be handed over to a designated branch of the University.

Each vehicle can seat six persons at a time including the driver and the vehicle will be under CCTV surveillance. The campus has 42 post-graduation departments with over 2,000 students, including those from over 30 countries. The buggies are an added transport mode, and students and the staff are free to use their vehicles within the campus, the VC explained.