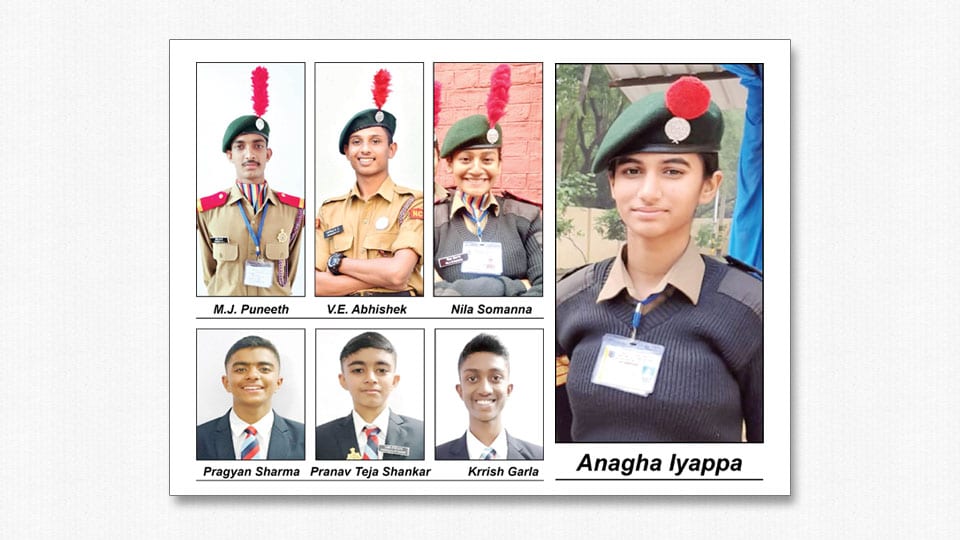 Mysore/Mysuru/Kushalnagar: Three cadets from 19 KAR NCC Battalion (Coorg Battalion) in Kodagu of Karnataka-Goa Directorate have been selected for the Annual Republic Day (R-Day) Parade in New Delhi on Jan. 26. They will perform in the NCC contingent that will march through the Rajpath greeting dignitaries including President Ram Nath Kovind and Prime Minister Narendra Modi.

The cadets are Junior Under Officer M.J. Puneeth, a Second B.Com student from Field Marshal K.M. Cariappa College, Madikeri. He is the son of M.L. Jagadeesh and T.M. Chandramani. Puneeth hails from Manjoor village in Sakleshpur of Hassan. Puneeth will take part in Prime Minister’s Rally.

The other cadet is Sergeant V.E. Abhishek, a Second PUC student from Pre-University College, Murnad. He is the son of V.S. Eshwar and V.E. Asha Kumari of Murnad village. He will take part in all India cultural show.

The third candidate from Coorg Battalion to participate in the prestigious parade is Codanda Nila Somanna. She is a Junior Under Officer and will represent the cultural team and is taking part in youth exchange programme.

She is the head girl of Coorg Public School, Gonikoppa and is the only girl cadet from Kodagu to reach New Delhi this year. She is the daughter of Codanda Sampan Somanna and Rashmi from Balele village.

From Mysuru, cadets Pragyan Sharma, Pranav Teja Shankar and Krrish Garla of Sri Ramakrishna Vidyashala, Yadavagiri, are representing the Karnataka and Goa Directorate in New Delhi. They will attend the Prime Minister’s rally. These three are the only cadets from Junior Division Army Wing from Mysuru Group who are attending the R-Day Camp.

Sergeant Kongetira Anagha Iyappa will also represent Karnataka and Goa Directorate at the Republic Day Parade. She is from the Junior Wing NCC, Mysore Group and is part of the Cultural Team competing at Delhi. She is a Class 9 student from National Public School (NPS), Mysuru and the youngest girl cadet in the Karnataka-Goa Contingent. She is the daughter of Col. Kongetira C. Iyappa and Nandini Iyappa.