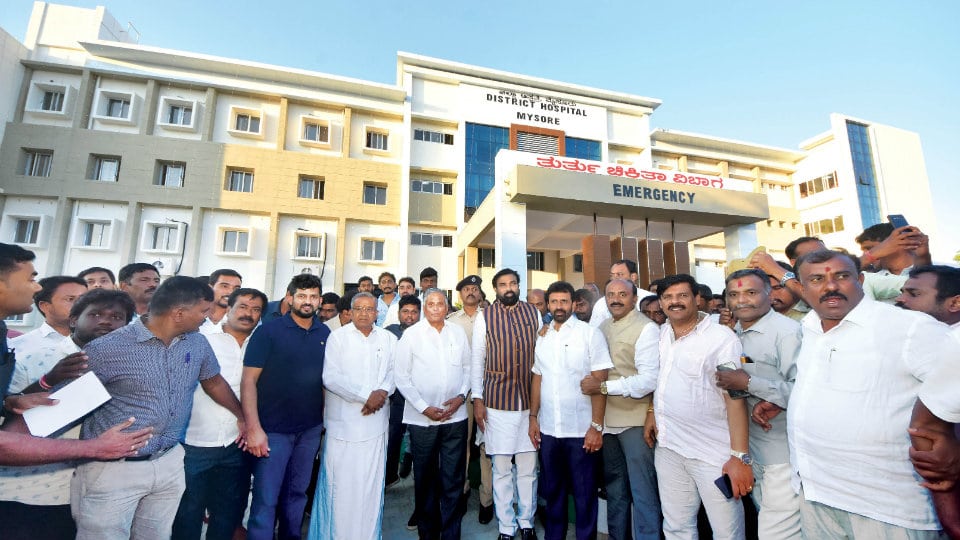 Speaking on the occasion, Sriramulu said that there will be a change in the pattern of appointment of doctors, with the government deciding to make appointments directly instead of selection through KPSC. Noting that appointments through KPSC is a long process, he said that 3,500 doctors will be appointed shortly and they will be posted at district & taluk hospitals and also at Primary Health Centres.

The Minister further said that the State government has sanctioned Rs.25 crore for establishing a generic medicine outlet and a blood bank. Stating that doctors serving in remote places will be given more pay, he added that several government doctors are serving at private hospitals too and their first priority should be to serve at the government hospitals where poor patients come for quality treatment.

Referring to the role of housekeeping staff in keeping the hospitals clean, Sriramulu said that there are complaints from these staff that they are paid only half of what the government pays to the Contractor. He instructed the concerned authorities that the outsourced house-keeping staff be paid in full.

MP Pratap Simha, who was also present at the inauguration, said that Prime Minister Narendra Modi’s health initiative, ‘Ayushman Bharat’ has been implemented throughout the country; but when Ramesh Kumar was the Health Minister earlier, he changed the scheme’s name to ‘Ayushman Bharat-Arogya Karnataka,’ which posed a lot a problems for patients as private hospitals asked for referrals from Government hospitals to provide treatment. The MP thus demanded dropping of the referral clause from the scheme, which in turn will benefit patients across the country.

Lauding Sriramulu for introducing 109 Ambulance, which provided a great impetus for health care in the State, Simha recalled that former Chief Minister Siddharamaiah and former Chamaraja MLA Vasu were chiefly responsible for the establishment of this District Hospital. The MP also demanded up gradation of K.R. Hospital in the coming days.

Earlier on Thursday, Sriramulu inaugurated a slew of developmental works and laid foundation other works at H.D.Kote in the district. Speaking on the occasion, he said that the Government plans to set up blood banks  and to build dormitories at all district hospitals in the State. He further said that all ASHA workers will be distributed sarees and waistcoats.

District Minister V.Somanna, who accompanied Sriramulu, in his address said, that both the Central and State governments are working for the development of H.D.Kote taluk, which is considered as one of the most backward taluks of the State.