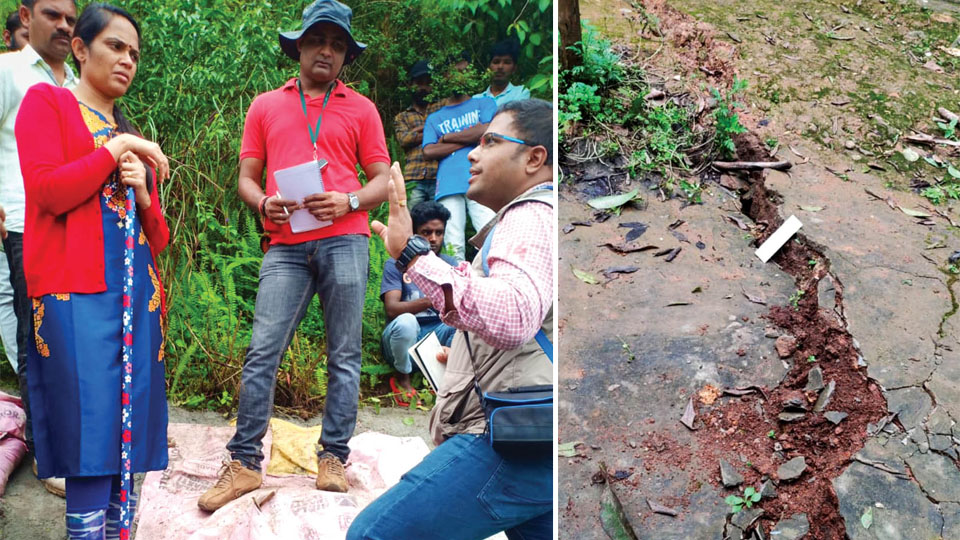 Virajpet/ Kushalnagar: The  Ayyappa Betta (Hillock) and the Nehru Nagar Hillock at Virajpet in Kodagu are unsafe and all the residents must be evacuated immediately. Even people living at the foothills are in danger as the hillocks are vulnerable to landslides, observed a team from Geological Survey of India (GSI) that visited both the Hillocks yesterday. The team visited the areas following an urgent request from Kodagu Deputy Commissioner Annies Kanmani Joy.

Cracks have been observed at Ayyappa Hill and Nehru Nagar hills due to unprecedented rainfall lashing the District over the last few days. A 25-metre crack has developed on Ayyappa Hill. It has been filled with cement and sand and covered with plastic to prevent water seepage. Also at Nehru Nagar, a big crack has developed inside a house. Cracks were also observed at Arasu Nagar area.

The GSI team comprised Kapil Sharma and Sunandan Basu and they visited the landslide spot in Thora village and later visited Ayyappa and Nehru Nagar Hillocks and inspected the cracks. The geologists asked Kodagu DC to vacate all residents from the areas till the rainy season ends.

In their preliminary observations, the geologists have said that the hillocks were not fit for human inhabitation and cracks indicate that the hillocks are vulnerable to landslides. The team observed that even people who have built bungalows at the foothills are in danger and need to be shifted.

In all, there are over 97 families who are staying in the vicinity and 17 houses have been fully damaged. Over 265 members from 54 families have been shifted from this region and have been accommodated at rehabilitation centres in Virajpet till August 31. The remaining families will be shifted either today or tomorrow. The GSI team collected soil samples from the hillocks and have taken them for laboratory tests. Though the initial observations have been made public now, the team will submit its preliminary report in a week. The final report will be submitted by a bigger team of GSI that is scheduled to visit Kodagu and Virajpet in particular after the rains relent, said sources.

Following the landslides, local people who are residing in the surroundings of the hillocks said that the hillocks have rocks as their base and the chances of the hillocks collapsing is more if only the rocks crack. However, the Kodagu DC told reporters that the guidance of GSI team will be followed and if required, the Administration will prevent any human settlements on the hillocks.

It may be recalled here that last year, following the deluge, landslides and floods in parts of Madikeri and Somwarpet Taluks, a GSI team surveyed the areas and studied the land patterns. The team was entrusted with the responsibility of assessment of the nature, causes, the future risk and  vulnerability at the landslide sites and also to suggest remedial measures — both immediate and long term.

In its preliminary report out of the study conducted from Aug. 27 to Sept. 1, last year, the GSI team had  mentioned that modification of land for construction of infrastructure like houses, hotels, home stays etc., large-scale slope modification for plantation (especially coffee) is one of the reasons for the landslides and flooding.

Armed with photographic evidence of extensive exploitation in the name of development, the Geologists showed how slopes have been modified extensively for plantations and construction of houses and in the process how these constructions blocked the natural drainage. This has led to landslides and the runoff has come down along the drainage course to damage the plantation and houses, the GSI team had opined.

2013 warning ignored This apart, in 2013, GSI experts had declared Monnangeri as not safe for human habitation as the area is prone to massive landslides. This report, was, however ignored and there was continuous exploitation of land in the form of land conversions. GSI sources said that similar land breaks have been observed at Ayyappa Hill and Nehru Nagar Hill at Virajpet.

Ayyappa Hill
Sage Agasthya stood for One Nation, One Culture
BSY to expand Cabinet on Aug. 20