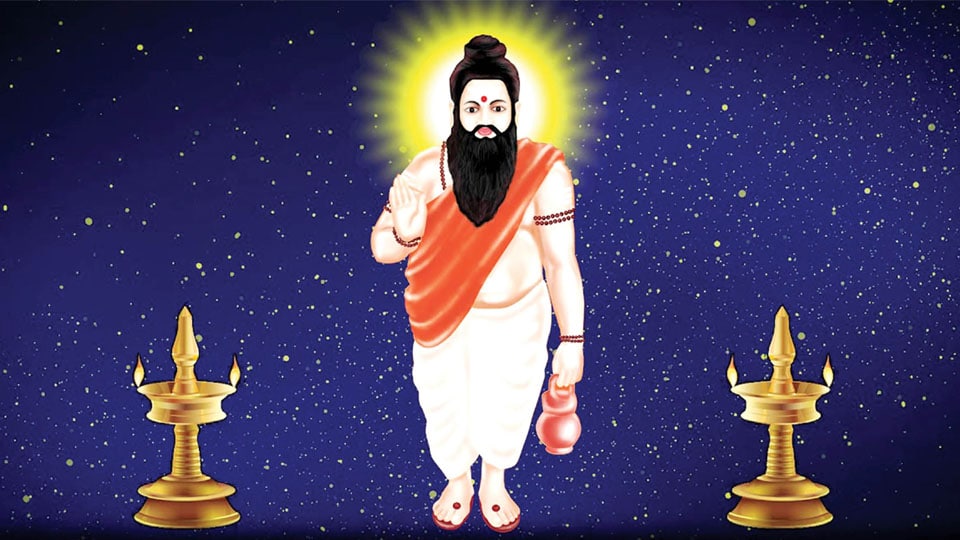 Sage Agasthya stood for One Nation, One Culture

The history of India dates back to thousands of years when it was known as Bharat or Bharatvarsha. Bharat was spread from East to West inclusive of Burma (Myanmar) and Afghanistan, Baluchistan, Kandahar, etc. and from South Rameswaram to the Himalayas.

Sages and powerful rulers and their intelligent ministers, maintained their entity and independence. Due to their combined physical and intellectual prowess, we have witnessed a glorious history. It is a special boon to live in this country that has an illustrious past and we are a privileged lot to have this legacy handed over by Rishis and Munis.

We must remember them for their invaluable work. These are the real patriots who have saved our country from being divided. Of course, later, Bharatvarsha was divided into pieces, thanks to many geo-political factors and today we can just recall the glorious past.

Among the sages who have preserved and safeguarded the vastness and cultural identity of Bharatvarsha is Rishi Agasthya. He stood for One Nation, One Culture. He bridged the gap between North and South India by travelling every part of the country and spread his philosophy.

There are many stories describing the great work done by Sage Agasthya who was called as ‘Ishvarasuta’ (son of God) and who made his name through selfless hard work for the benefit of humanity. Agasthya had extraordinary intelligence and he could see certain Sutras which are included in Rig Veda.

All the Vedas are called ‘Apourusheya’ meaning they are not written by anyone. Those who have divine powers could hear or visualise these divine Sutras during penance and they uttered them to their disciples. Most of the time, the Sutras were in the form of chanting and it took a long time to bring these Sutras in writing form.

When Vindhya decided to grow tall

Agasthya dedicated his entire life for unification of our country. Legends say that once Mountain Vindhya started growing tall to compete with mountain Meru. Vindhya’s this act would have resulted in separating Bharatvarsha and there would have been no communication between the two parts of our country.

Also, growing tall, Vindhya would have blocked the path of the Sun thus depriving South India of light and energy. The situation was dangerous and it was sensed by Gods and Sages. They approached sage Agasthya who was the most respected Rishi. Agasthya was tasked with convincing Vindhya.

Sage Agasthya was a multi-dimensional personality. He went to South to restore the balance of Earth as it became evident from the fact that when all the Rishis from the world went to North to hear Shiva’s lecture on Vedas and Tantra. This resulted in tilting of Earth and hence Lord Shiva deputed Agasthya to South to restore balance. Agasthya was spiritually at a very high level and had no equals.

As per another legend, Sages from the Universe had gathered at Mount Kailash to attend the marriage of Shiva and Gouri resulting in the imbalance. Whatever may be the reason, the imbalance had to be restored to save the Earth and none other than Agasthya had this capacity.

Sage Agasthya had brought along with him Lopamudra in his ‘Kamandala’, which was full of water from Heaven. When he went to Kodagu and visited the Ashram of sage Kavera — who adopts Lopamudra as his daughter and Agasthya made her flow as Cauvery for the benefit of entire region. The next task Agasthya had to complete was to enrich the languages of this region. He was proficient in Sanskrit and its grammar. It is said that he was the one who systematised grammar of Dravidian languages. His contribution to Tamil language is matchless.

Thus Agasthya dedicated his life for upliftment of human values and sacrificed his entire life selflessly and established high standards of our great civilization. Perhaps because of such efforts thousands of years ago, our civilisation could gain the position of being one of the oldest civilisations.

Once Agasthya taught a lesson to Sea as the Sea was crossings limits and encroaching land. Initially Sage Agasthya tried to convince the Sea and make him understand the importance of remaining within limits. However, when the Sea was adamant, Agasthya swallowed entire sea. After realising his mistake, the Sea begged Agasthya’s pardon. Agasthya filled the sea again with his super powers.

During Ramayana, Agasthya guided Srirama when he was in distress and advised him to recite ‘Adityahrudaya’ composed by Agasthya and gain mental strength to defeat demon Ravana. Sage Agasthya was treated at a very high level by all the Gods as well as scholars.

Lord Hayagriva, the first incarnation of Lord Vishnu and the Guru of Goddess Saraswati, communicated with Sage Agasthya as he was the only one to understand true knowledge. Agasthya and his wife Lopamudra propagated the powers of Tantra and Mantra through their compositions in Sanskrit.

Even today Agasthya’s compositions stand firm in the forms of Brahmanadpuran’s Lalitopaakhyaana and Lalitasahastranaamavali, Lakshmi Kavacha, and many others which are recited regularly.

Agasthya had knowledge of pure Vedas. He had acquired the knowledge of medicinal plants and its benefits to treat many diseases. Agasthya studied and planted medicinal herbs according to the soil and availability of water. Even today, between Tamil Nadu and Kerala, the mountains associated with rare medicinal herbs are called Agasthyamalai. At Badami near Bagalkot we can find Agasthya Sarovar and it is believed that the water of the lake cures many diseases.

Every action of Sage Agasthya conveys very important messages for people to follow. To name a few, one should never compete with anybody unnecessarily with selfish motto and one should not be over-ambitious. One should learn to be within limits and should not be afraid to face difficulties. One must not hesitate to seek guidance from knowledgeable people when needed.

We have to take care of nature and environment and we should be in a position to communicate with people to establish harmony for which learning more and more languages is essential. We should feel proud about our mother, motherland and mother-tongue but at the same time must learn to respect other cultures and language.