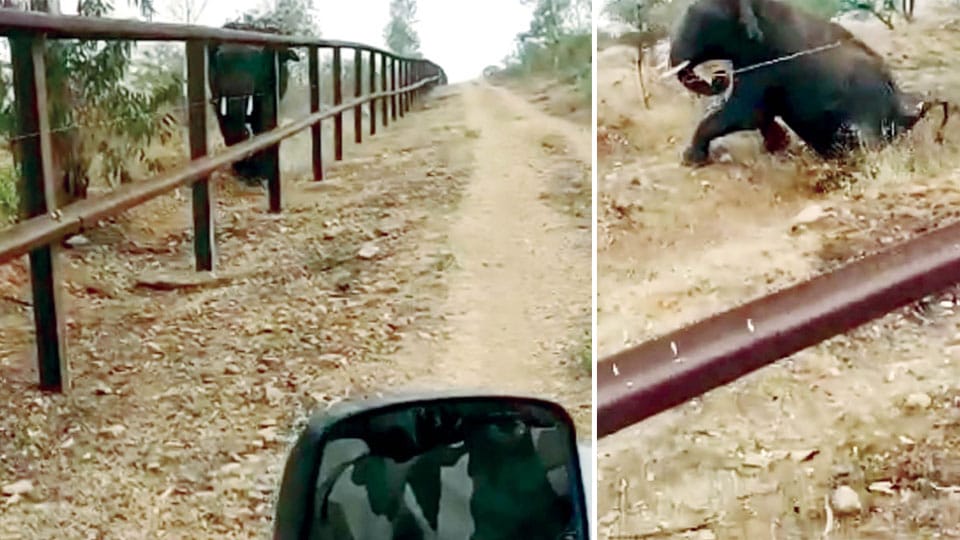 Show-cause notice issued to another employee

Mysore/Mysuru: Following an outrage after a Forest Department staff opened fire at a tusker near a railway track fence in Hediyala Range of Bandipur Tiger Reserve, a temporary staff of the Department has been dismissed from service and a show-cause notice has been issued to another staffer who made a video of the incident.

The gun pellets hit the rail track fence and the tusker swerved to its right, climbed a mound of mud and escaped without any injury.

Preliminary investigation revealed that it was Rahim, a temporary forest staffer, who opened fire with a Double-Barrel Gun while patrolling.

Another staff, Umesh, shot the video and the video has gone viral, sparking an outrage. The video was said to have been shot on Mar. 7, but came to light on Mar. 11.

The video showed the staffer shooting in the direction of the elephant. The bullet hit the rail barricade and the tusker missed the shot by a whisker. The others in the jeep were also heard laughing and making shrieking calls to scare away the elephant. The terrified tusker slipped through the elephant-proof trench and ran away from the forest boundary.

Speaking to Star of Mysore this morning, Bandipur Tiger Reserve and Project Tiger Director T. Balachandra said that the moment the incident came to his notice, Rahim was dismissed from service as he is a temporary staffer.

READ ALSO  Bandipur tiger dies while being shifted to Bengaluru

“The men on vehicles were goading the elephant back into the forests but it turned around and charged towards the squad members. The team’s intention was to shoot in the air but in the melee, the driver started the vehicle and there was a misfire,” Balachandra said.

“We have served a show-cause notice to Umesh and action will be taken against him once he replies. There is no question of going slow on investigation and the people in the jeep have told us that it was an accidental fire as they were trying to fire in the air. Even the unruly behaviour of the men inside the forest is uncalled for,” he said.

Though forest officials said the pellets that hit the elephant would not have been fatal as the shot was fired from a distance of 15 metres, green activists say that the pellets would have been embedded in the animal for years which could lead to long-term complications.